By Rosiey (self media writer) | 6 months ago 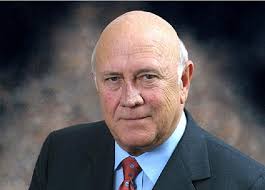 Even if you do not have a soft spot for politics, the name FW de Klerk should ring a bell to you. He is a household name in South Africa. He is popular for serving as the president of South Africa from 1989 to 1994.

Something peculiar about this renowned politician is that he was the last president under the apartheid rule. He is remembered for initiating the end of the apartheid system of racial segregation as well as negotiating a transition to majority rule in the country.

de Klerk and Nelson Mandela, were both honoured with the Nobel Prize for Peace in 1993, because of their dire efforts to initiate a non-racial democracy in the country. He opposed P.W Botha for resumption in the office of the president after he fell ill. His political success is a result of the power base he had established in Transvaal when he held the position of chairman, Provincial National Party.

The former president was born in Johannesburg, his parents were Johannes de Klerk and Hendrina Cornelia Coetzer. He comes from a that loved politics, his father was a popular politician.

In 1958, he graduated from Potchestroom University with a law degree. After completing his undergraduate studies, he established his law firm in Vereeniging and practised for a few years.

The former president was married to Marike de Klerk. She was a politician under the National Party. In 1999, the couple got divorced. In 2001, she was murdered in her house in Cape Town. The politician then married Elita Georgiades in 1999.

He had three children with his first wife, his other son died in 2020 at the age of 53, after a battle against cancer.

" What Comes To Mind When You See This Picture ? " Post Causes A Stir On Social Media

Another mass shooting incident in KwaMashu, north of Durban, many people lost their lives

A guy refused to remove his balaclava during his graduation for fear of witchcraft.

The Man is trending after living in this condition for Fourth years. Check out