By BNews (self media writer) | 1 month ago

Opposition groups are intensifying their campaign to oust President Cyril Ramaphosa, who is being investigated for allegedly concealing a burglary incident at his farm from the police. 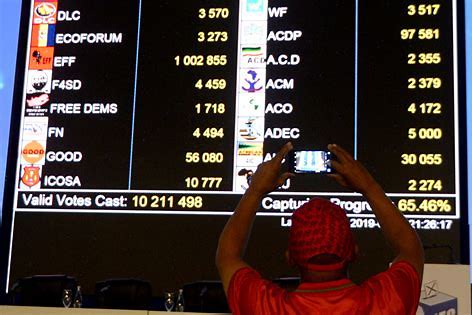 Yesterday, the opposition parties announced new measures to ensure that Ramaphosa steps down. These measures were taken at a meeting of the parties with their representatives in Parliament.

Among the measures announced by the parties include a motion of no confidence in Ramaphosa's leadership in Parliament, holding protests at the offices of the agencies investigating the incident of breaking into Ramaphosa's farm.

The measures were announced at a press conference in Johannesburg. The parties that were part of the forum are EFF, IFP, UDM, ATM, COPE, ATM and PAC. 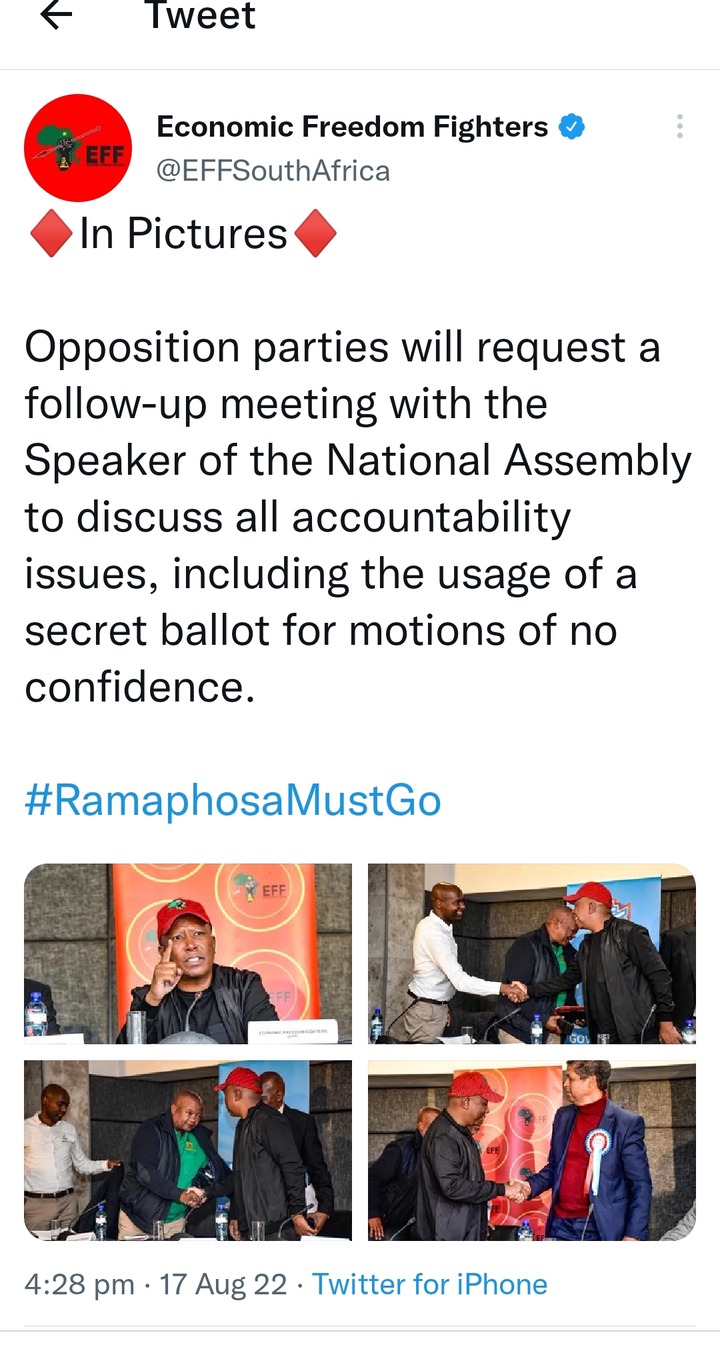 The leader of the EFF, Mr. Julius Malema, said that they will table a motion of no confidence in Ramaphosa's leadership in Parliament. He said they want a secret vote when the proposal is voted on.

Malema said the DA wants the parliamentary investigation to be released first, before a motion of no confidence in Ramaphosa's leadership is tabled.

"We believe that it is the DA that should file a motion of no confidence in Ramaphosa's leadership because it is the main opposition party. We have appointed a team that will persuade the DA to submit the proposal now. We believe that the proposal is urgent, that is why we want it to be tabled now," explained Malema. 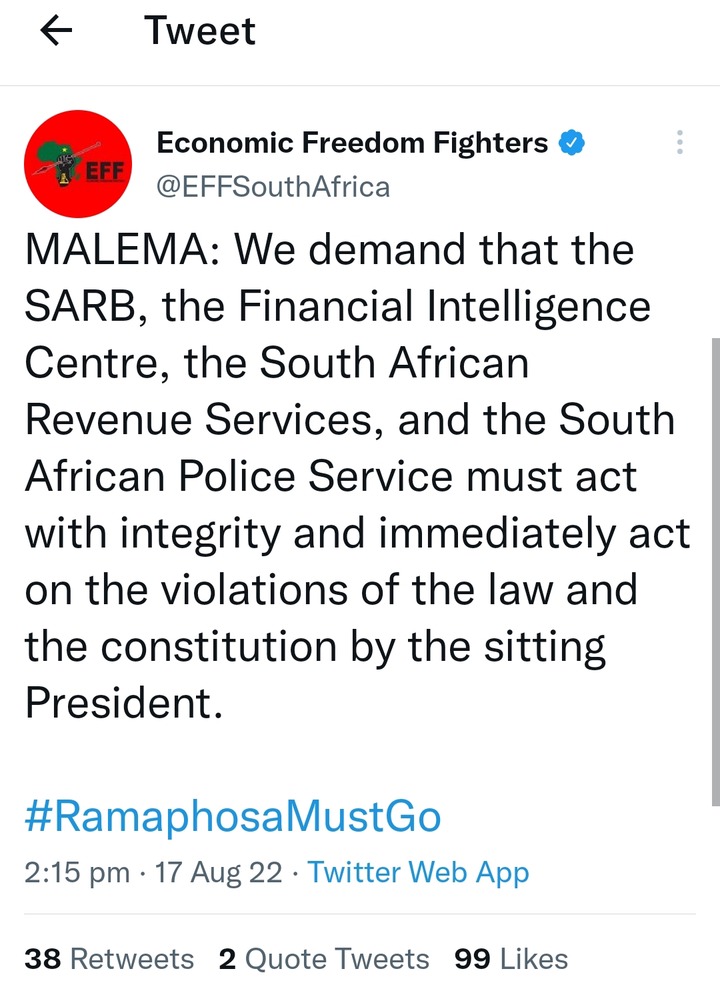 Two other smaller groups, Al Jama-ah and Good, are not part of the opposition talks.

Malema said they will continue to lobby these groups and said they hope that other members of the ANC will vote for the motion of no confidence in Ramaphosa's leadership.

Malema announced that they will hold a protest outside the public protector's office, which is one of the agencies investigating Ramaphosa.

"It has been a long time since the public defender's office started an investigation but has never released its report. The law makes it clear that this office must issue a report 30 days after the investigation began."

Malema said that the opposition parties will continue with different cases that they have filed in the courts when they want answers on this issue from organizations such as the police, the Hawks, the SA Revenue Service, the SA Reserve Bank, and the Financial Intelligent Centre.

It has been 70 days since Ramaphosa was charged but we have not received any answers. The truth is that all agencies are afraid. It is not easy for them to investigate the president because his officials can be fired. That is why we want him to step down, so that these agencies can investigate him freely," explained Malema. 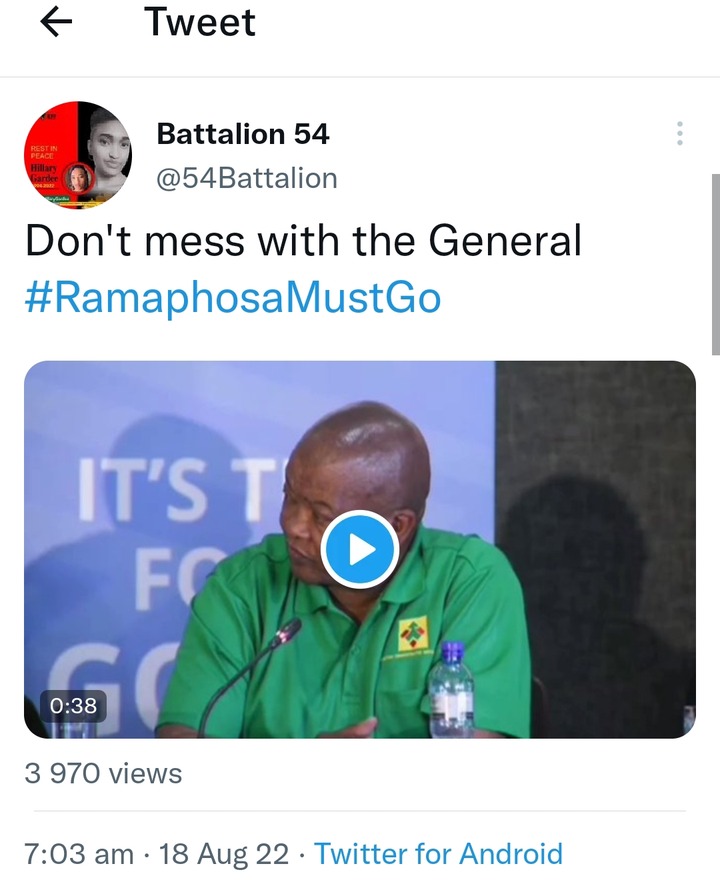 Ramaphosa was prosecuted by the former head of intelligence, Mr. Arthur Fraser. In the affidavit, Fraser accuses Ramaphosa of hiding from the police the burglary of his farm that took place in 2020. 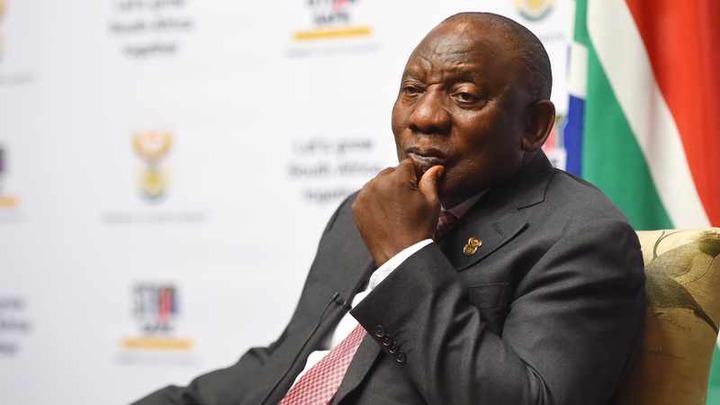 Fraser made allegations that the criminals stole 6 million US dollars. It is said that the suspects were beaten and some of the money was taken from them before they were bribed to keep their mouths shut.

Content created and supplied by: BNews (via Opera News )