Opposition parties are not happy with Zuma's parole.

By Mtsubhane (self media writer) | 4 months ago 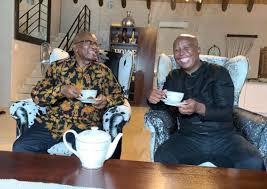 Cope's Dennis Bloem - a former head of the portfolio committee on correctional services while still an ANC member – has been incensed by the decision.

Bloem responded by saying that Minister Lamola and the Department of Correctional Services must account to the country for the factors that influenced Zuma's medical parole decision.

“It's abhorrent that the Correctional Services Department has to make a mockery of our parole system. It's inexcusable, and it's evident that Zuma has benefited from special treatment since his incarceration in July.

“Zuma’s co accused Schabir Shaik was also released under questionable medical parole. The minister and the national commissioner must account to the country which informed Zuma’s medical parole,” Bloem said.

Minister Lamola, he claimed, addressed the country a day after Zuma's incarceration and declared Zuma would not receive preferential treatment, "see what is happening today."

Bloem claimed he was aware of a large number of sick convicts who had submitted many applications for medical parole but had been refused.

“Some of them are dying in prison,” Bloem said.

On Sunday night, DA leader John Steenhuisen reacted to Zuma's medical parole, claiming it made a mockery of the Correctional Matters Amendment Act.

He said that after Schabir Shaik was granted unlawful medical parole in 2009, Parliament's portfolio committee on correctional services unanimously supported amending Section 79 of the act to require the minister to establish a medical advisory board that would provide an independent medical report to the national commissioner, In addition to a medical report, the correctional supervision and parole board or the minister, as the case may be.

“Any assessment on a prisoner's health must be submitted to an impartial board's recommendation to establish, in reality, that a prisoner is truly deserving of medical parole. Given Jacob Zuma's public refusal to be evaluated by an independent medical expert, much alone a medical advisory board, Steenhuisen believes this choice is a breach of the act and hence illegal.

He further claimed that the parole was issued by someone close to Zuma.

Singabakho Nxumalo, a spokesman for the Department of Correctional Services, said on Sunday that Zuma had been placed on medical parole.

According to Nxumalo, Section 75(7)(a) of the Correctional Services Act 111 of 1998 gives the national commissioner the authority to place a sentenced offender serving a sentence of incarceration for 24 months or less under correctional supervision or day parole, or to grant parole or medical parole.

“Under Section 52, the national commissioner has the authority to impose parole restrictions. Mr Zuma's eligibility for medical parole is based on a medical report from the Department of Correctional Services.

“Inmates suffering from a disease that significantly restricts their daily activities or self-care, in addition to being terminally sick and physically disabled, can be considered for medical parole. The danger of released convicts reoffending must also be minimal, and adequate procedures for the inmate's monitoring, care, and treatment within the community to which the offender is to be released must be in place,” he said.

Zuma's medical parole placement, according to Nxumalo, means he will serve the balance of his term in the community correctional system, where he will be subjected to a set of conditions and supervised until his sentence expires.

“Medical parole can only be revoked if an offender fails to follow the terms of his or her placement. We wish to emphasize that all convicted criminals have the possibility of being placed on medical parole if they satisfy all of the conditions. “As Mr Zuma continues to undergo medical care, we ask to all South Africans to treat him with dignity,” Nxumalo added.

Mzwanele Manyi, a spokesman for the Jack Zuma Foundation, told the media that the decision to give Zuma medical parole was evidence of the system's "humanness."

“It demonstrates President Jacob Zuma's fragile health. Two medical reports influenced the decision. “One was produced by military medical services, while the other was compiled by Correctional Services' own medical doctors,” Manyi explained.

Content created and supplied by: Mtsubhane (via Opera News )