By PatNews (self media writer) | 4 months ago Naledi Chirwa is one of the youngest members in the parliament. Chirwa was responding to the president's tweet about the need to protect to protect the Constitution and Democratic State

"You're such a weak little boy. All your fellow stooges you sent to collapse Lindiwe collapsed themselves. It won't be surprising if you do what little boys do when overpowered by women.Throw thee tantrum we are expecting it. You'll fiercer remain a toothless boy. Mfana ke mfana. " Chirwa said on her tweet 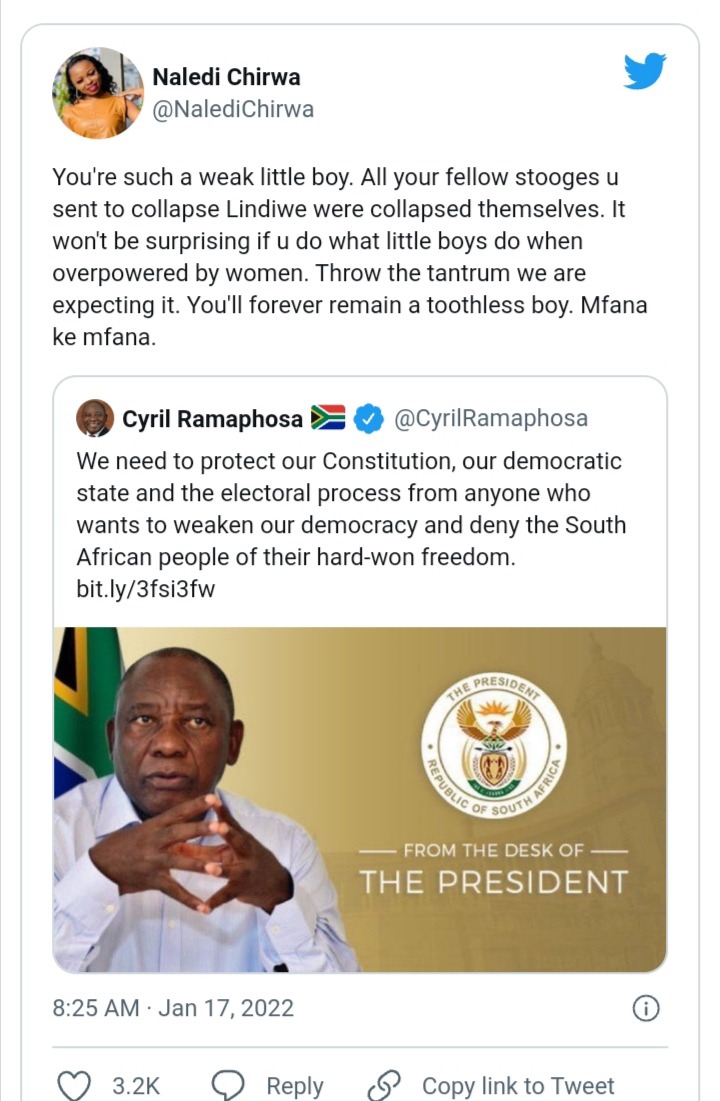 Followers sent and commented on the tweet, here's what they had to say

" We should not stoop to such language. I don't like Ramaphosa and his politics. That language is disrespectful. That's your colleague and leader. uMongameli" Sdima tweeted.

Kgaugelo Moroka tweeted: "The language is unfortunate. You are better than this, way better."

Casanova said "" "You were too quiet on the Bushiri issue cause you and him come from the same country now you're disrespecting our president? Wa tella wena".

"Y'all tell Naledi Chirwa to 'respect her elders' her elder in question? None of those kleptomaniac ANC officials deserve our respect. They don't respect us, our lively hoods, health, safety and intellegence so why should we respect them" Lesilo Rula tweeted.

Ruperts'sPudgyLetfTit said: "To all those outraged by Naledi's tweet I need to understand if you were as outraged when a man from Stellenbosch called the president and his cabinet domkops. Would you be less outraged if she replaced the offending word with Dom kop? Introspect."

In my opinion I think Naledi should have said what she said in a respectful manner, the President is older enough to be his dad.