ANC Palaver: ANC To Expel MPs Who Voted For This Top Politician.

Today the ANC will vote to remove two of their councilors who voted with the DA in the Kannaland district to expel members from their alliance. 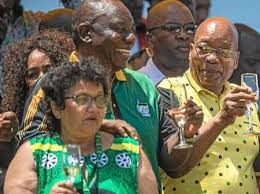 This comes after the Western Cape High Court on Friday decided for an earnest application brought by the Independent Civic Organization of South Africa (Icosa) against two ANC councilors, two DA councilors, the region and its administrator.

The application looked to topple the choice of the March 10 party meeting which saw Icosa speaker Werner Meshoa and councilor Hyrian Ruiters who additionally filled in as a delegate for the chamber to the Garden Route District Municipality eliminated through movements of no certainty.

The DA's Aletta Theron was then chosen as speaker and her associate Joslyn Johnson was sent as an agent to the region. Icosa asserted that the party was held illicitly after Meshoa had suspended it yet every one of the four councilors chose to continue and that the speaker was not given sufficient notification period before movements were postponed.

Be that as it may, the court's decision on Friday evening put to the side every one of the choices, reestablishing both the Meshoa and Ruiters.

The ANC's Lerumo Kalako said the gathering would today elastic stamp suggestions to oust two of their councilors, Magdalena Barry who is city hall leader and Phillipus Antonie who is the agent chairman, for voting with the DA.

"We invite the court's choice returning the unlawful gathering. We need to state completely that those councilors acted to their greatest advantage without the say-so of the ANC as a locale and region. We have since a long time ago pulled out of the alliance with the DA and these two have their own relationship with the DA councilors," he said.

"They have challenged themselves out of the ANC, the area has sent us a suggestion and we will finish the way toward ousting them at a party of the Interim Provincial Committee (IPC) on Sunday."