By GavinMndawe11 (self meida writer) | 1 months

He is an in-law to King Mswati, but we know him as our former President Jacob Zuma. In the midst of a state capture inquiry, with all eyes on him; JZ managed to pull a Bushiri move on South Africa by crossing the border for what some say is another tea party. Videos surfaced around the internet of a convoy of luxury cars at the Swaziland border believed to be ferrying Mr. Zuma, leaving social media users speculating why he went there, especially during such a fateful time in his life.

When SA Is Fussy, Talk To A Swazi

Jacob Zuma is a hero to some and a villain to others, much like King Mswati whose nation he's reported to have visited in the past few hours, according to the Times SUNDAY. Both Zuma and the king have many enemies and both of them are highly controversial figures, known especially for their love for women. One cannot help but wonder if Zuma will meet with the king, but it isn’t hard to imagine that he might, considering all the attention he received when crossing the border.

Some say he fled to Swaziland, some say he’s simply getting some fresh air, whatever the reason; we know he’ll be warmly welcomed by the Swazis and possibly even the royal house. Nobody knows how long he’ll be there, no one is sure if he was invited or if he just decided to pop in; the whole thing is a complete mystery. Mswati and Zuma made news several months ago when a story emerged concerning what was believed to be Moammar Gaddafi’s hidden stash of cash. Since then, there’s been a lot of suspicion surrounding their relationship, and there are no signs of that suspicion subsiding anytime soon. The Swazis seem to treat him like he’s still president; he is always received like a rock star. No matter what the purpose of the trip was, it is bound to be productive or interesting at the least.

Swaziland’s legal system is structured in such a way that King Mswati cannot be charged for any crime or even called as a witness. In light of the fact that Jacob Zuma might be in trouble with South Africa’s law, it could be ideal for him to relocate to Swaziland where the king is his relative by marriage. Mswati's relatives are known for their legal untouchability, with Prince Sicelo having never been questioned for being accused of raping a university student. It is for this reason that some claim Zuma will not come back to South Africa, and it sure would be a cunning strategy on his part.

Swaziland has the right to not agree to extradition in case South Africa wants Zuma arrested, it would all be at the king’s discretion. Do you really think Jacob Zuma is on the run because he knows he’s guilty? Do you think he stopped by one of the royal palaces for a visit with his in-laws, or do you believe he simply booked a room at a hotel? When will Zuma return to South Africa, in your opinion? Let us zoom into your mind for a bit, share this on Twitter and tag Zuma, and FOLLOW FOR EVERYTHING SWAZILAND! 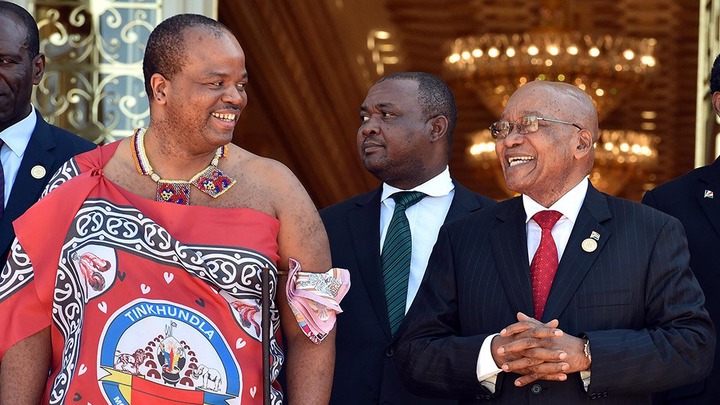 Bad news for Somizi Mhlongo as he's back in court

Get to know more about Wayne Van Rooyen AKA Stokiie

Thing's to Know about Kabomo Vilakazi