When 3 transgenders are elected into political positions in 3 countries, know it is the end (Ndlovu) 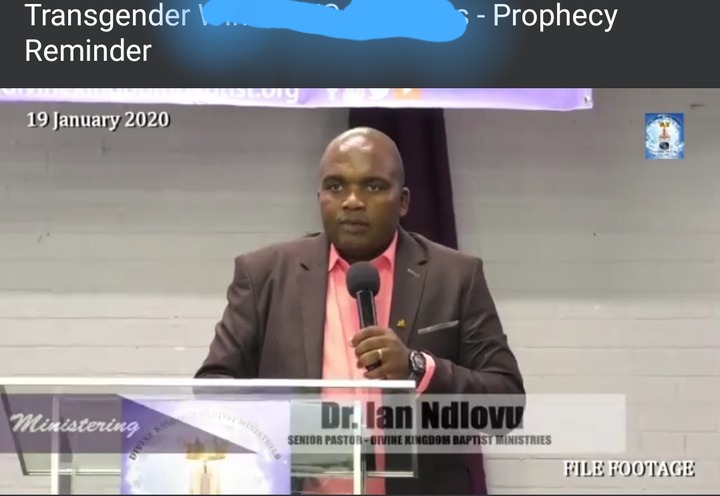 This man of God is not new in our social medias, Dr Iann Ndlovu who is the founder and the president of Kingdom Baptist Church in Bulawayo, Zimbabwe. The man of God has been making rounds since the coming of the famous corona. Actually one prophecy that has made him famous was, the prophecy about Corona and the time of the vaccine.

This men of God prophesied about the Corona which came to pass, and revealed how God was going to use scientists to put to an end the dilemma that the world is facing. I guess when he said the scientist, he was talking about the initiative to vaccinate.

He has been talking about also a lot of prophecies that attain to the interpretation of the end times. We can actually call him an eschatological prophet because he has been very eschatological.

His preachings, in his prophecies and in whatever warnings that he is giving, the man is just eschatological. He prepares people for the coming of the lord Jesus. He is preparing the church to get ready to meet the Messiah, we also heard about the prophecies that he gave as a warning to the world against certain powders that women will use to bleach themselves, and end up burning their faces

He also prophesied about the world trying to make humans one with gadgets, he said the time will come when humans will be one with machines, where there will be a certain machines in a body of humans that in the links them with the machines.

Hr was talking as a vision that the Lord was showing that the world is going to do this, implementing very powerful surveillance cameras, so that they can be able to monitor the movement of everybody. He prophesied about aliens that will be coming, we know that aliens in a political term, but according to him they are evil spirits, or demons that will appear physically. He said they will be saying messages that are not understandable, and a lot of people will you be gripped by fear. It will leave a lot of people shivering trying to understand what is happening.

He futher said, but at the same time Angels also will be appearing physically. They will be people that will confess that the Angel came to them physically and give them a message to God's people or to the church. These Angels will be saying messages that will be preparing the church for the coming of the lord Jesus.

Also these creatures that will be coming like aliens, together with this angels they can even be captured by a camera. Any person can be able to take a snapshot through his phone, and it can circulate around social media, still a lot of people will choose not to believe, that it is a true, so these are the warning signs that he has been giving about the end times.

This time around, he now has come to remind us of the prophecy that he wants gave in 2017. Where he said, "the Lord spoke to him around 5:00 in the morning. He said when you see three transgenders elected in three countries in the position of honour, you must know that it is the end.

As the Bible has accurately predicted, if there's still people that do not believe in the Bible prophecies, they are just a hardening they are hearts, but what the Bible said about the end times, about this time that we are living in. Some of the things have started taking place from a very long time, some are taking place, and some are still going to happen. So it only needs a person to apply logic and spiritual understanding that, in the first place the Bible did not lie about the times that we are living in. If a person understand these times, then I guess it is time that we face the reality and get ready to meet the Messiah.