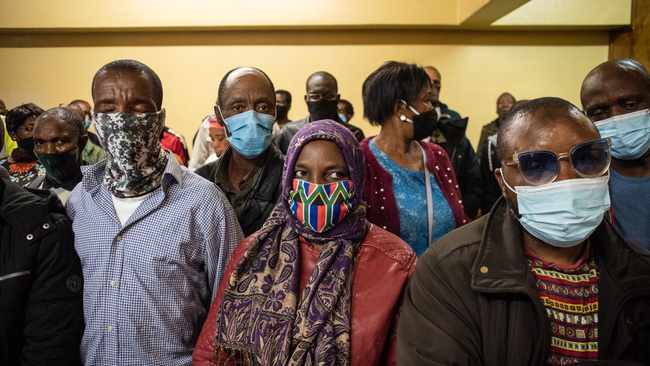 Johannesburg - All 53 military veterans, captured regarding holding two Cabinet pastors and an agent serve prisoner, are out on R500 bail each.

They are generally due show up in court on February 1, 2022. On Friday 11 suspects showed up at the Kgosi Mampuru Correctional Facility's court, where it was heard that nine of them have been associated with plan five violations, including murder, endeavored murder, burglary with exasperating conditions, and ownership of a gun.

One suspect is as yet in medical clinic. He supported wounds when police safeguarded the three authorities.

Military veterans back in court today

WATCH: One of the military veterans charged in prisoner dramatization on parole for homicide, court hears

Charged number 23, Lwazi Mzobe, 47, is essential for a development of the freedom battle war veterans.

He is one of the heads of the gathering.

He said they come from MK, Apla, and Azanla.

He said he was conceded and released before he could serve in the military.

Mzobe has one past conviction, served jail time for quite a long time, and was delivered in 2010.

He said he became engaged with the military veterans toward the beginning of May.

He said, while still in jail, they connected with the then president Thabo Mbeki to address their situation.

"It was anything but a wrongdoing. It was endurance to us. We needed to successfully put food on the table," said Mzobe.

He said he drew in with Mbeki, and said a couple of them had been associated with crimes for endurance.

"We had been guaranteed a ton of things, including better positions and a once off tip, in addition to other things. These guarantees were not really satisfied," he said, while standing up.

Perusing out the advantages that the military veterans should get, he said: "In the event that we had gotten those advantages we wouldn't be here."

He said they went to the Union Buildings to see the President, to connect with him about their battles and discover a way forward.

"We have lived like this for a very long time and they have been saying we are being helped, however we have not been helped at this point," he said.

He affirmed that they had a telephone call with President Cyril Ramaphosa, which went on for about 60 minutes. They were an assignment of 20.

Mzobe said they address around 4 000 individuals.

"In the wake of meeting with the President, he deceived us and let us know he knew our concern," said Mzobe.

Mzobe said the President then, at that point, let them know that he has entrusted Deputy President David Mabuza to seat the panel.

"We went to Luthuli House, we didn't walk. The aim was that we needed to see the President and his best six," Mzobe said..

He said, subsequent to enumerating their complaints, they requested opportunity to settle on decisions.

Mzobe said that they were guaranteed that the delegate president will see them on October 14.

Mzobe said they arranged a three-day protest, as they didn't have the means to return home.

At 5pm, they should meet with the delegate president.

He said, by 6pm, the delegate president didn't show up, and Modise and different individuals from the official assignment groups showed up.

"Being treated in such a way stunned us and we clarified that it was not the way our gatherings are taken care of with the Presidential board of trustees. We said that we were anticipating a gathering with the delegate president and he showed up after the expected time, directing to us – with no clarification why he was are late," Mzobe said.

"We were beaten. After we were beaten, the uncommon team came out and the SAPS came in with the Hawks. They were looking through us and, when they found cellphones, they took them. Then, at that point, there would be someone else requesting your name, last name and pin code forcibly," he said.

Mzobe rejected that he had a goal to capture anybody.

Check How president Cyril Ramaphosa looks in his office. But why are his cupboards empty. See Pics