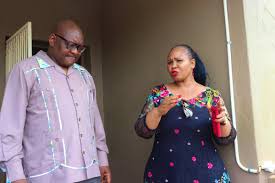 David Makhura is a renowned South African who hails from the heart of Limpopo Province. David was elected in 2014, as the 6th Premier of Gauteng. Interesting to note, he is also a member of the African National Congress, as well as a member of the Gauteng Provincial Legislature.

The Gauteng Premier David Makhura is a man of few words and much action. He was among the ANC Premier candidates for the Premier of Gauteng in the 2019 elections, a position that he managed to resume. He believes that one needs to be determined and firm in decision making to ensure that they are successful in their undertakings.

For those that have had the chance of interacting with David, they will tell you that he is a knowledgeable man. He is a scholar who graduated from the University of London with a Master of Science degree in Public Policy and Management.

He is the current Premier of Gauteng, a position he has been holding since May 21st, 2014. David is also the PEC, general secretary of the ANC party in the Gauteng Province. He is a respected board member of the Ahmed Kathrada Foundation. His vast knowledge of governance issues comes handy for the foundation. He is also a volunteer mentor at the centre for education in economics and finance.

He joined PEC, since the year 2001, and has gained more than ten years of experience in his position as the PEC, secretary of ANC.

Before soaring high in the political world, he was previously involved in both youth and student politics between the years 1984 and 2004. Some of the movements that he actively took part in included the South African Youth Congress, the Congress of South African Students, the Azanian Student Movement and the South African National Students Congress.

In 1986, he joined the African National Congress which was then banned. In 1987, he then joined the South African Communist Party. For those that knew him then, he was famous for standing firm and fighting against financial exclusion in various tertiary institutions. During his term at the South African Students Congress as the secretary-general, he ensured that the college students faced no challenges when it came to funding.

David Makhura has also played a vital role in the country's delegations through his political party, ANC. They visited and interacted with various trade unions and parties in Europe, Africa, Cuba, China, and Latin America.

In August, he stated that the new proposed bill would not easily allow foreigners to run specific businesses. This was during a hearing at the provincial legislature, where he noted that the only way to ensure that locals had an opportunity to engage in the country's economic growth was to curb foreigners from running those businesses.

His sentiments were made after various residents raided some of the spaza shops that were owned by foreigners. He went further to state that more information would be released once the township economy bill was finalized.

He is estimated to have a net worth of about $1 million to $5 million, from his great positions in the political arena. However, there is no clear information about his salary.

David Makhura is a man who is a source of wisdom to many in South Africa. He is accredited to having rich knowledge in governance, which makes him the right candidate for his current position in the government of South Africa.