By Harmadoni (self media writer) | 4 months ago

At OR Tambo International Airport on Wednesday night, a Bangladeshi national was apprehended while attempting to flee the country with a forged South African passport. An intensifying crackdown on the use of forged South African documents led to this occurrence taking place in Pretoria. 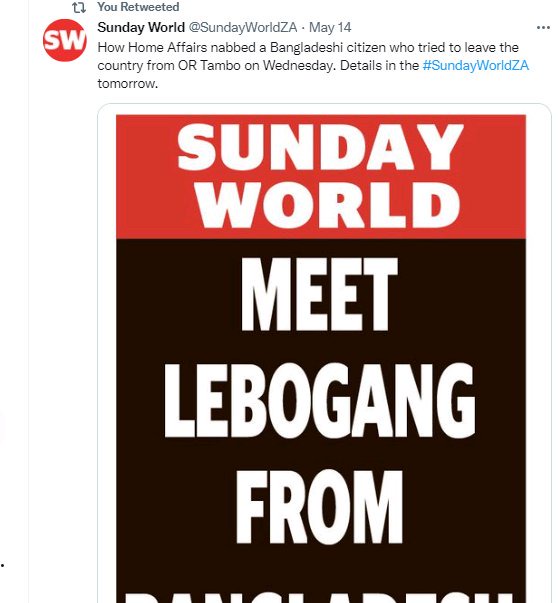 "We've tracked down the corrupt officer in charge of home affairs who issued this passport, as well as the location where it was obtained. It is believed that the corrupt official who issued it is currently being investigated by the department's counter corruption branch, according to Home Affairs Minister Motsoaledi.

the Bangladeshi national had submitted an asylum request in December of 2015 but it was denied "because he is most obviously not in need of refuge," the agency concluded after further investigation. Because of South Africa's "complicated" appeals process, he has been trying to reverse his conviction.b

An April travel visa issued by Bangladesh's "People's Republic" was recently discovered in the possession of a Bangladeshi individual, according to Motsoaledi, a South African official. Since they are presumed to have fled their country of origin, people requesting asylum are unable to get any official documentation from that country. The Department of Home Affairs is concerned about the abuse of our country's asylum system (DHA).

It doesn't matter if the corruption was perpetrated by a South African or a foreign national; we won't give up or give in in our fight to root out all forms of it in domestic affairs "According to the minister, The Krugersdorp Magistrate's Court on Thursday discharged 26 of the 27 people detained in March on suspicion of being part of a ring that generated counterfeit passports and allegedly involved staff of the department of home affairs and Somalian nationals.

One of the suspects, a Pakistani national, was denied bail in connection with the aforementioned incidents. Arresting syndicate members was viewed as an important step forward by the department. Fourteen of the people arrested were citizens of South Africa, with the rest hailing from other nations. There was a postponement of the hearing until July 5th because of the R2000 bail set for the 26 defendants. Police in Gauteng said they found R45,000 in cash and two suspected gang vehicles when they arrested the suspects, according to Captain Ndivhuwo Mulamu, a spokesman for the force. 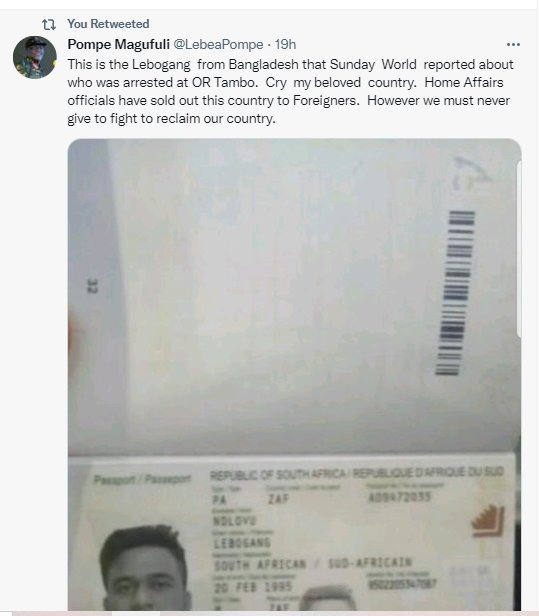 While under arrest, Motsoaledi said that the suspected kingpin was part of an extensive network that included officials in the departments of home affairs from around the country, including from KwaZulu-Natal, the Eastern Cape, the Western Cape, Mpumalanga, and the Limpopo region. Across the country, this network was responsible for smuggling drugs. Two Department of Homeland Security employees have been arrested. According to Motsoaledi, he was expecting more arrests. It was possible to track down the kingpin after two passports were flagged as suspicious by immigration officials at the country's main airport, according to the report. There were "passports in question belonging to people who were planning to flee to a specific airport." There is no doubt in my mind that the officer in question has given the two suspects and their passports over to the police.

A forged passport was allegedly offered for R40,000 by the leader of the group. Each passport cost between R5,000 and R10,000, according to the two home affairs officials involved. Non-citizens who wanted passports but didn't meet the requirements, according to the minister, could get them from the syndicate's leader. After that, a runner would look for South Africans who hadn't previously applied for a passport and bring them on board.

"Lieutenants," officers in charge of domestic affairs, would arrange to acquire an office in which they could authenticate the documents. "It is claimed that the kingpin bought cars for his henchmen so that he could have them at his beck and call any time of day or night. That is to say, the lieutenants were always available to the kingpin whenever he needed their help "At the time, Motsoaledi added.

According to Sunday World, he was the Lebogang from Bangladesh detained at OR Tambo. Cry my beloved country. Officials in the Department of Home Affairs have sold this country out to foreigners. Although we must never give up, we must continue to fight to reclaim our nation."