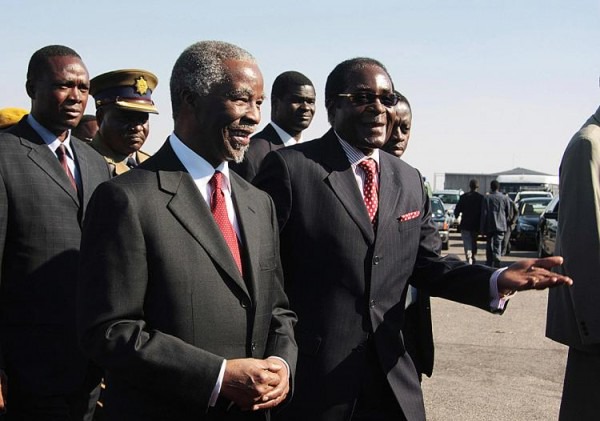 Zimbabwe's hyperinflation since 2000 was a matter of increasing concern to Britain as the former colonial power. Not only Britain but other donors to that country. High-ranking diplomatic visits to South Africa repeatedly attempted to convince Mbeki to take a harder line with Robert Mugabe over violent state-sponsored attacks on political opponents and opposition movements, expropriation of white-owned farms by ZANU-PF allied war veterans, sanctioning against the press, and infringements on the independence of the judiciary.

Rather than publicly criticizing Mugabe's government, Mbeki chose quiet diplomacy over megaphone diplomacy, his term for the West's increasingly forthright condemnation of Mugabe's rule. Mbeki is even quoted claiming there is no crisis in Zimbabwe, despite increasing evidence of political violence and murders, hyperinflation, and the influx of political refugees into South Africa. 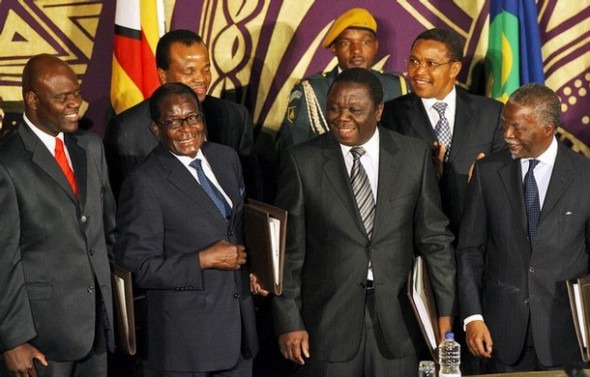 From his point of view has been that the critical role SA should play is to assist the Zimbabweans to find each other, really to agree among themselves about the political, economic, social, other solutions that their country needs. He said he could have stepped aside from that task and then shouted, and that would be the end of his contribution.

They would shout back at them and that would be the end of the story. He believed that he was the only head of the government that he know anywhere in the world who has gone to Zimbabwe and spoken publicly very critically of the things that they are doing.

Mugabe faced a critical presidential election in 2002. Concerns over the conduct of the election in Zimbabwe prompted debate within the Commonwealth and led to a difficult decision to suspend Zimbabwe from the organization. Mbeki supported Mugabe during this period. It is thought that Mbeki viewed Mugabe as a victim of imperialist meddling and the opposition Movement for Democratic Change (MDC) as a Western stooge.

The full meeting of the Commonwealth had failed in a consensus to decide on the issue, and they tasked the previous, present (at the time), and future leaders of Commonwealth (respectively President Olusegun Obasanjo of Nigeria, John Howard of Australia, and Mbeki of South Africa) to come to a consensus between them over the issue. On 20 March 2002 (10 days after the elections, which Mugabe won), Howard announced that they had agreed to suspend Zimbabwe for a year. 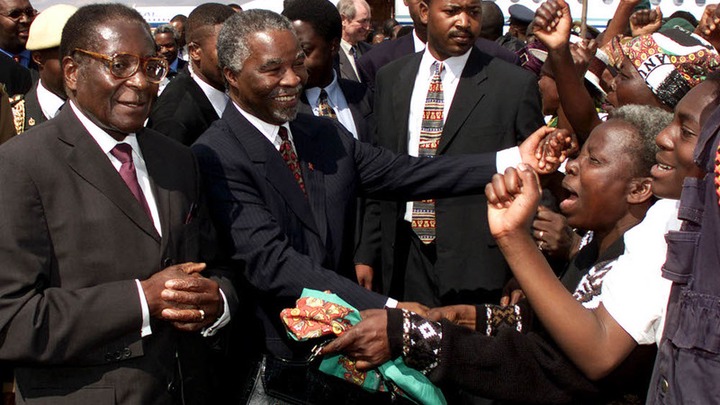 A 50 person-strong South African Observer Mission found that the outcome of the 2002 Zimbabwe presidential elections should be considered legitimate despite condemnations over the conduct of the election by the Commonwealth, Norwegian observers, Zimbabwean opposition figures, and Western governments and media.

Mbeki also sent South African judges Sisi Khampepe and Dikgang Moseneke to observe and compile a report on the elections. The report was kept secret until 2014 when the Constitutional Court ordered that Khampepe's report should be made public after a long court case brought against the South African government by the Mail & Guardian newspaper.

The Khampepe Report contradicted the South African Observer Mission and found that the election can't be considered to be free and fair and documented 107 murders mostly committed against supporters of the opposition MDC by Zanu-PF militias in the weeks before the elections.

Mbeki's stance on the elections permanently soured relations between South Africa and Zimbabwe's opposition and negatively affected the credibility of South African diplomacy.

How Much Sugar Is In Beer? Can Beer Increase Blood Sugar Level? Here is What You Need to Know