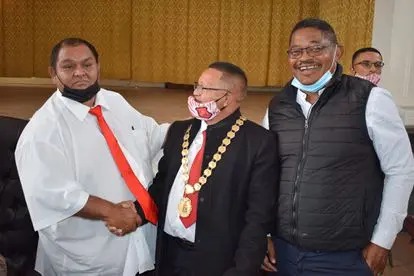 The ruling party African National Congress have pulled out it coalition agreement with the Independent Civic Organization in Western Cape province , the mayor Jeffrey Donson is convinced rapist .

The mayor was convicted of rape case and indecent assault after raping a 15 year old girl while he was serving as the mayor back in 2018 .

Rumors was already out there that he would return to the mayoral position in Kannaland . Society and activists have put so much pressure to the African National Congress to cut the ties or end relationship with Donson to serve as a mayor .

Sifiso Mtsweni ANC spokesperson in the Western Cape said on the 1st of December the provincial coordinator visited Kannaland to effect this decision . The ANC speaker of the municipality is being withdrawn and they said they will assume opposition in the municipality .

IOL reported that , ICOSA Western Cape Chairperson David Kamfer criticized the media and accused it of being part of orchestrated .

Jeffry was convicted of statutory rape and indecent assault in 2008 of a minor who lived as a life partner of 50 year old man for quiet some time . And he it was said he didn't have any idea or clue how old was the girl .