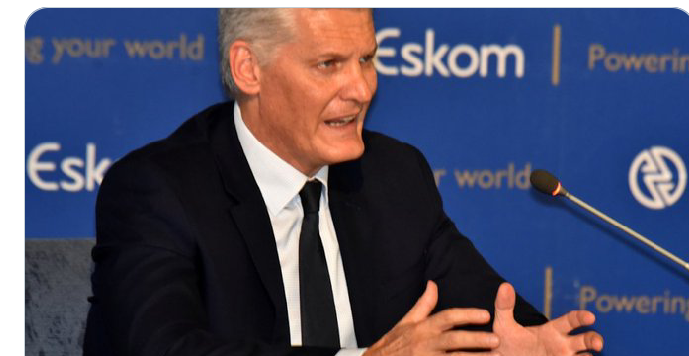 “I'd be the first to say I’ll merrily step back if I feel I’m not making a dent in it, or if there is someone else with the credentials to step into my shoes who can do a better job. I would welcome their offer of assistance immediately, but that person hasn’t yet stepped forward.

“I know there are many armchair critics who delight in being very clever and style themselves as energy experts, but, with respect, I don’t think they have the full appreciation of the challenge the job entails.”

Sounds suspiciously like Andre is reaching his gatvol factor … no support from Gvt; called a liar by Minister Mantashe; calls for his sacking; blamed for LS; death threats; active ongoing sabotage, De Ruyter is an incompetent buffoon just like those he criticizes. He must go. We are tired of his excuses and blame game.

A complete waste of state money. He won't be missed. Really and all those criminals before him at Eskom did a good job, they are the ones who got Eskom where it is now. De Ruyter is continuing the tradition, it's not like things are improving at Eskom. I stand by De Ruyter,Eskom was dead before he took over. Eskom was paying inflated prices on procurement, which include:

Milk was procured for R56 per litre. I stand by De Ruyter,Eskom was dead before he took over. Eskom was paying inflated prices on procurement, which include:

Milk was procured for R56 per liter. The reason he was hired was to turn around Eskom and stop load shedding, but up to so far he has failed dismally, and I don't know why you keep defending him, he must do what's expected from him as a CEO. He is not the cause of Eskom load shedding, sabotage, and stealing of expensive equipment contributes to the problems. Ever since they get rid of White engineers, Eskom has battled blackouts.