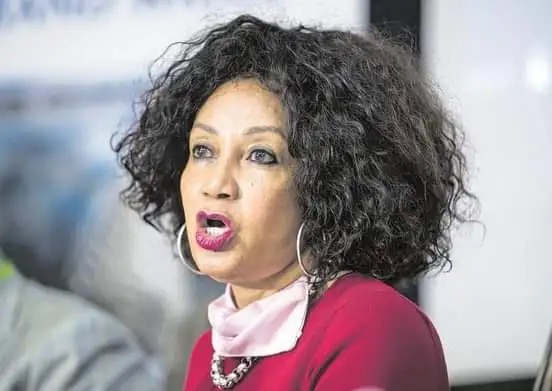 “Asking a rhetorical and misguided question like "what has Sisulu done since 1994 as a Minister and NEC Member"? I think you should first tell us why every sitting President and every Elective Conference have retained Sisulu in the Cabinet since 1994 and NEC since the unbanning of the ANC then break it down to us what were her KPAs she has been failing to deliver on since 1994...by so doing, you've laid down the foundation for a constructive engagement, not just noise that won't take us anywhere.” 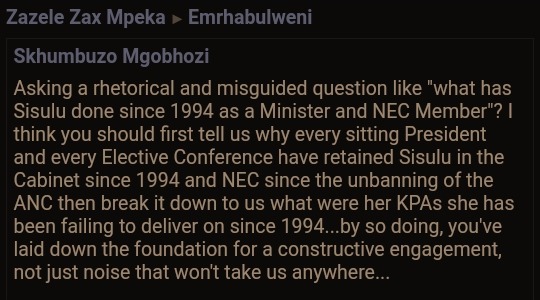 She was elected because of the surname which has worked in her favour. I think the relevant question to be asked is did she ever raise issue of amending the curent constitution before ?Why did she agree to be elected and serve under the same constitution she is rubbishing.? Why did she took an oaths to defend such a constitution when she was appointed to serve in different ministries.? The lady has been manipulated by RET Cult because they don't have a credible person to reprsent them and because she feel entitled to become a President of the ANC and RSA. Anyway she is not a Presidential material.

The ANC doesn't deploy its members as ministers based on merits neither do these individuals make it to their provincial lists because they have anything to offer. Our country is in a state of paralysis because of the ANC deployment committee which always give us rubbish and mediocrity. The cabinet is full of dead woods in offices who offer nothing to this country. Except tweaking in English what is Naledi Pandor giving this country. ..NDZ has become part of the furniture in cabinet so is Lindiwe. Unmasked the name Sisulu from her she would be naked with no political title. Her intelligence and military background mean absolutely NOTHING.