Buthelezi :There should be no confusion about who should be King

By EYRFM-NEWS (self media writer) | 10 days ago 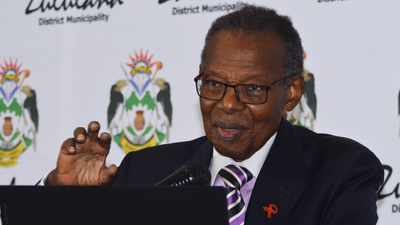 A delegation tasked by the Minister of Cooperative Governance and Traditional Affairs, Dr Nkosazana Dlamini Zuma, to resolve the throne dispute has heard that there should be no confusion as to who should succeed the newly-crowned King, Goodwill Zwelithini kaBhekuzulu.

The delegation, led by former KwaZulu-Natal premier Willies Mchunu, met with supporters of the election of King Misuzulu Zwelithini yesterday.

A meeting at the Khangelamankengane palace was attended by King Cyprian Bhekuzulu of Solomon, Mayvis MaZungu, Zulu premier Inkosi Mangosuthu Buthelezi, Prince Philemon of Fihlinqindi, and other children of the royal family.

At the meeting, Buthelezi emphasized that there should be no dispute over the throne.

Although a will left by the incumbent Queen, Shiyiwa Mantfombi Dlamini Zulu, nominated King Misuzulu of Zwelithini to take the throne, there are those at headquarters who disagree.

Some want Prince Simakade Zulu to take over.

But Buthelezi told the delegation that even if there were no wills left by the newly bowed king and the newly bowed Queen, the throne would already fall to the King who was announced after the Queen's kneeling.

“Let me make it clear from the outset that even if the King and the Prince were not left to write these last letters, it would not be possible to guess who the Prince and Heir of the King are. The whole of Zululand knows that when the Prince married the King, the King sent me as his Prime Minister and Zulu, to inform the nation that Prince Prince Crocodile Sobhuza II would marry him, he should be married to the nation.

“I did just that, and I reported to all the Kings and Zulu that the King was telling us not to marry Mntanenkosi.We just understood what it means, as we know our customary law and tradition, that if the Emperor chooses a woman from among those close to him, we ask him to be registered by the tribe and we tell the nation that he is committed to being the mother of the nation, his wife.

At the meeting, Buthelezi also expressed dissatisfaction with the fact that the KwaZulu-Natal government had met with opponents of the King's nomination without introducing him as the Zulu premier.

The matter was referred to the president, Cyril Ramaphosa, following a failed bid for the KwaZulu-Natal government to resolve the dispute.

Ramaphosa then appointed Dr Dlamini Zuma to intervene in the matter, who appointed the Mchunu-led team.

The team has already met with those who oppose the King's appointment.

The king was not present at the meeting as it turned out that the meeting had been called in Johannesburg and the team had already indicated that it would be better for the king not to attend the meeting because it concerns the seat dispute.

Check Out Who Is Getting The Highest Salary Between Ramaphosa, John Steenhuisen And Malema. See Here