What happen when a woman knee down to her husband and show him love, appreciation and respect. Well it seems like not everyone understand the culture which woman are bid to follow.

There is a picture of certain couple in social media which is currently circulating and it seems like Minister of Finance Tito Mbowenu does not support the idea. Finance Minister took it to his twitter account where he made a strong comment about this couple. According to him, he does not support the idea that a lady or a woman have to knee down to her husband when giving him food.

With caption: This is unacceptable in today’s world: political, cultural, sociological, people-to-people, ideological, or in terms of gender equality struggles!" He wrote 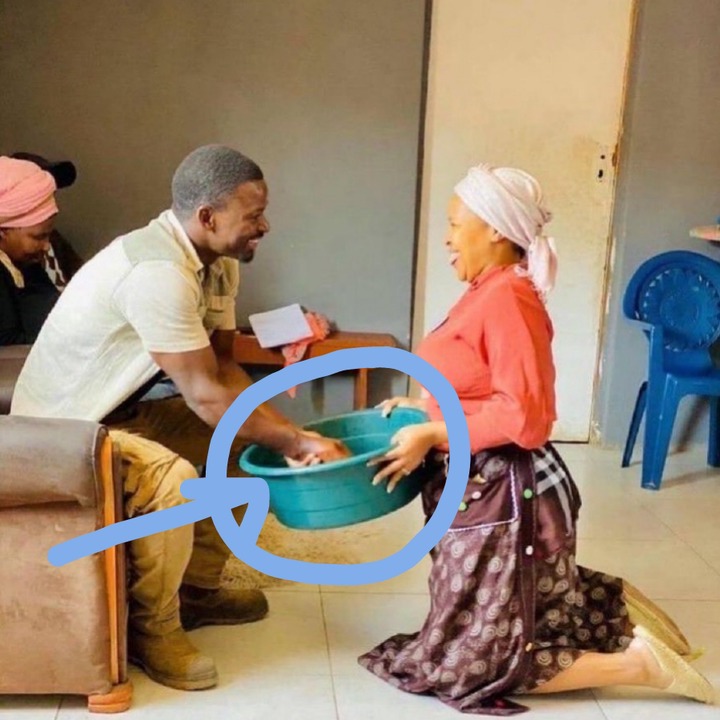 Tito Mboweni might be taking this way overboard because his comparison is irrational since they are two different things, it ain't got anything to do with colonial masters and all has to do with how cultures undermines and oppress females. What happens if he's unemployed and she's working? Does he kneel if he gives her those provisions? If the woman has to cook dish up, hold the dish for him to wash his hands and kneel while she's doing that. How about him? That means he must work, get paid and kneel if he gives her those provisions.

It has been debate in social media as some people are no longer following culture like our parents. Looking at the time we are living at, one may agree to Tito Mboweni's statement. There few things that have changed because of education we were able to uplift some such, daughter in law are no longer staying with parents of the husband. When they got married they choose to go outside and start their own family.

Tito Mboweni said it's unacceptable, but how is this unacceptable? But Poverty and corruption is acceptable? This a relationship she's not his slave but submissive. He provides and she's cares for him. In today's role they both can be providers but he still has to be the head of the household. To an individual that you are in control, I do respect men and culture when I see the necessity although will not be brainwashed into believing that, such an inconvenience is a mere cultural practice coz it's not about that and all has to do with proving ldominance over the other.

Culture, Bear in mind that handing out of food is a daily practice, so do you think that it is really that necessary for one to kneel down in order to hand out food or it is just another of culture revealing one of its oppressive nature's of making women subordinates, inessential?

What is your thoughts?

7 Ways To Never Get Tired Of Sèx With Your Partner: Checkout No. 2 and 3

Hangwe defied the odds of poverty as he starts a bricklaying company regardless of his degree.

Long Street Should be Renamed to Lagos Street Because Nigerians have Taken Over, SA Lady Says.

Operation Dudula has shifted focus to the corrupt members of ANC and EFF after they did this.

Before the fame: Master KG's tiny bedroom studio will bring you to tears