This post looks like it is very sarcastic, but it may be true that, Cryril was planted there to overthrow the ANC, to put to an end to the their era of power. Have you ever asked yourself why president Cryril Ramaphosa is mostly celebrated by white people? Even by the time that he was put into office, he had a lot of white people celebrating him than the number blacks celebrating him.

Even now he has got a more support from the minorities than he has from the majority. Maybe they knew what they were doing, maybe he was a strategy to overthrow ANC, maybe making him a president who was to make sure that the ANC comes to an end, and if this is the strategy that they've used day, who ever came up with this idea is a wise person.

We are tired of the ANC folks, seeing black people that are wearing suits, very pompous, proud and arrogant against the citizens, stealing from them, stealing tenders, and giving a lot of the money of the citizens to their relatives. They drive expensive cars, leaving in mansions, and a lifestyle that is so far beyond their salaries. So we are tired of seeing this, so it's fine if he was put to destroy ANC, it is the time that this organization come to an end. If they do come back, let them come back when they are fully transformed and ready to do better, but as for now, the African national Congress has really disappointed us. 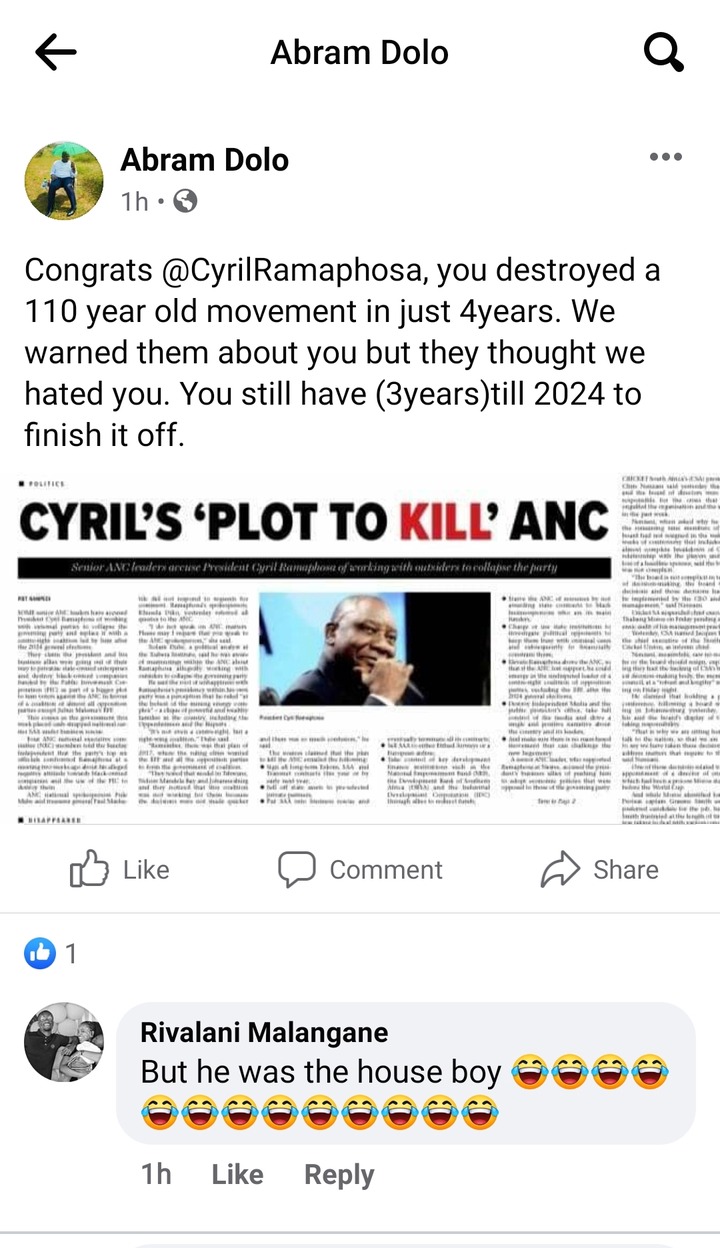 Congrats @CyrilRamaphosa, you destroyed a 110 year old movement in just 4years. We warned them about you but they thought we hated you. You still have (3years)till 2024 to finish it off.

But also it is not only Cryril Ramaphosa who has contributed to the destruction of the of the African National Congress. It would not be fair to say that or to give that a load to the current president alone. What Jacob Zuma did when he was still the president of ANC, was enough to put ANC on the ground, was enough to make people not to trust the ANC again.

Under his leadership corruption was so high. People who were his syndicates stole large amounts of money, and other corrupt things that they happened that they've costed the nation billions. Even the rand lost so much against the US dollar. So good job to both Cryril and Jacob Zuma.

Plot Twist:See the Person Who Registered Mamkhize In the Fake college/ Opinion

Instead of studying, take a look at what these nursing trainees were caught on camera doing.

Of Your Partner Is Not In The Mood For Intimacy, Here Is What You Should Do