We will continue to support Zuma as KZN: Zikalala

By Heart_News (self media writer) | 1 month ago 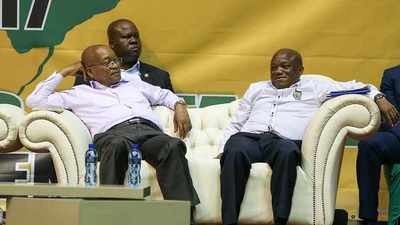 KwaZulu-Natal ANC chairperson Sihle Zikalala said they still supporting former ANC president Jacob Zuma when he went to court over decisions made at the 2018 conference.

Zikalala said Zuma did not make him their god but supported him because he was one of the leaders they respected.

He said supporting Zuma did not mean he did not support President Cyril Ramaphosa because he was the current leader of the party.

“We have a problem that in the ANC there are people. There are people who say that if they do not agree then they want to include national leadership. There are some who go and talk about each other, saying they do not support a particular leader or they are very supportive of a particular leader. We will continue to support Zuma as decided by the conference and we also support Ramaphosa because he is the current president of the ANC, ”Zikalala said.

Saying this yesterday in his address marking the 67th anniversary of the drafting of the Freedom Charter.

He called for an end to factionalism in the party as there were supporters of Ramaphosa and supporters of radical economic reforms, aligned with Zuma.

"Radical economic change is one of the goals the ANC agreed upon at the Nasrec conference. So we all support these changes, not because we support one side or the other. We are the people of the ANC. We cannot be judged on who we support. Even during the Zuma-Mbeki (Thabo) dispute we were asked whose people we were. We told them we are not human beings but belong to the ANC. ”

He lamented the dissolution of organizational structures such as the youth wing, the women's wing and the non-election in the presence of the constitution.

He warned members urging others to seek out councilors, saying they would also be targeted in the future.

The EFF also had a similar celebration in Soweto where its president, Julius Malema, spoke about free education, unemployment, the pursuit of economic freedom and more.

Content created and supplied by: Heart_News (via Opera News )