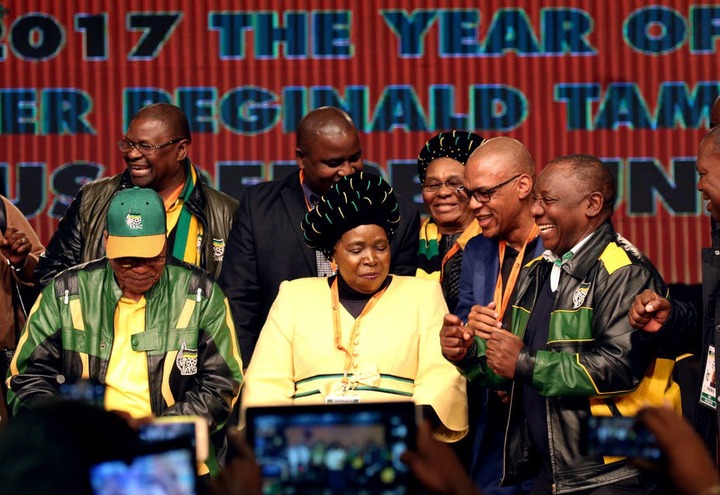 The voters at the ANC conferences comprise roughly of 90% delegates from ANC branches across the nine provinces. Provinces had been allocated a total of 4,731 delegates (proportionately in terms of membership figures). The rest of the about 5,240 voting delegates come from the ANC’s national executive committee and top six officials (roughly 90 in total). The nine provincial executive committees (27 each, thus 243), the women’s, youth and veterans’ leagues (60 each, thus 180).

The number of branches endorsing Ramaphosa by the evening of December 4 were 1,860 and Dlamini-Zuma 1,333. A total of 3,193 for both candidates, or around 2,000 fewer than the total number of conference voters.

Given that the race will go down to the wire, and that a few hundred ballots in either direction could make a world of difference to the ANC and South Africa, this analysis dissects eight black holes that account for the approximately 2,000 “discrepancy”.

At the core, the uncertainties that make up the eight black holes are:

The scores released by the ANC’s Provincial General Councils have a “margin of error”. This is because the scores are of branches and not individual delegates. But big branches send more than one delegate and are given more weighting in the voting. This can substantially change the balance between leading candidates come the election.

Mpumalanga province brings its own black box of 223 “unity” votes. The biggest bloc of branches refused to endorse a particular candidate and entered ‘unity’ on nomination forms, following the instruction of provincial leader DD Mabuza. These votes can therefore go to either leading candidate should the delegates cast their vote rather than waste it.

A number of branches are caught up in disputes. Challenges centre on the lack of legality of the branch general meetings, some of which have been chaotic. Some battled to reach quorums (50% of members had to be present), or they faked quorums. In other instances officials disappeared with meeting materials and memberships lists, attendance registers were signed off-site, or bickering and fist-fights ruled. These branch delegates could still make it into the voting booths at the conference if the ANC task teams resolve the disputes.

A number of branches and provincial structures have taken their disputes to court. Prominent cases are in KwaZulu-Natal, Free State and the Eastern Cape. The national conference does not ultimately depend on the provincial structures, but provincial leaders may have influenced their branch-based underlings substantially, or have covered up irregularities that affected whom the branches nominated. Disputes at the time of conference could exclude some from voting, or having their votes counted.

The ballots of individual delegates are secret and it’s therefore uncertain to what extent branch nominations will convert into matching votes. Prior conference outcomes show that the branch or provincial counts tended to hold: delegates are inclined to vote according to their mandates. But, political times have changed. Beyond the scrutiny of the superiors and away from branch commissars, delegates might vote according to “conscience”.

Hand-in-hand with individual discretion in the voting act is the practice of “brown envelopes”, or bribes. Speculation is that the bribes could be enormously persuasive, going into six-figure rewards for the right vote.

70% of the security force in apartheid South Africa were black. 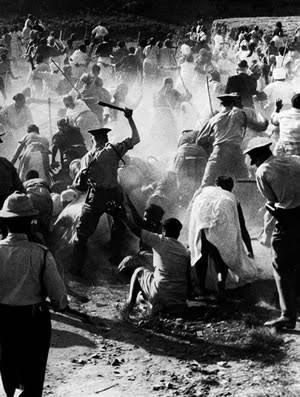 England occupied Egypt with 80,000 soldiers, of which only 1,000 were British and the remaining were recruits from its colonies (mainly Indians).

France occupied Syria with an army made of Africans (mainly from Algeria and Senegal).

During the apartheid period the South African government, through a network of private and government-controlled corporations led by the state-owned Armaments Corporation of South Africa (Armscor), developed a variety of new weapons systems, mostly in order to overcome the effects of the international arms embargo imposed by the United Nations Security Council in 1977. Nuclear weapons were developed in great secrecy—six atomic bombs were built during the 1970s and ’80s—but the nuclear weapons program was terminated in 1989, and the bombs were dismantled the following year by the NP government as the prospect of a Black-led government became increasingly likely.

The regular police are organized nationally and comprise regulars as well as reservists. There have been about equal numbers of whites and nonwhites, reflecting a disproportionately high number of whites. Police responsibility for maintaining internal security brought them into sharp conflict with antiapartheid demonstrators during the 1970s and ’80s. The specialist security police gained power within the force during that time, while thousands of poorly trained and poorly disciplined auxiliary police were recruited. As political control increasingly took precedence over basic policing, Black communities were often treated as enemies rather than as citizens to be protected. The police were granted immunity and extrajudicial powers under the states of emergency first declared in 1983, and their actions were widely seen as abusive, contributing to the growth of international pressure on South Africa’s government. Once the police had been freed of the burden of enforcing apartheid, they faced the challenge of forging better relationships with communities in the fight against rising crime levels.

In the late 1970s the daily average prison population was almost 100,000, one of the highest rates in the world. Of these, the majority were imprisoned for statutory offenses against the so-called pass laws, repealed in 1986, which restricted the right of Blacks to live and work in white areas and which did not apply to other racial groups. Under the states of emergency declared at periods of peak conflict in the 1980s, as many as 50,000 persons were detained without charge or trial. The proportion of the population in prison then declined, many detainees being released in 1990 with the end of a state of emergency; negotiations for a new constitution also led to the release of many political prisoners. An amnesty policy was instituted, covering politically inspired offenses committed by both whites and nonwhites during the closing years of the struggle against apartheid, provided that offenders fully revealed their actions to a public commission. The prison population began to increase significantly in the mid-1990s, and in the early 21st century South Africa’s prison population rate was the highest in Africa and among the highest in the world.

While racial bias was not explicitly written into health legislation during the apartheid period, medical care for South Africans invariably reflected the economic and political inequalities of the society, as well as the consequences of apartheid’s residential and administrative segregation and of deliberately unequal government health funding. Hospital segregation has ended, but access to medical services remains greatly inferior in historically Black areas. The health status of Blacks is generally low; malnutrition is perhaps the most important long-standing example, especially among rural children. There is an enormous discrepancy in infant mortality rates, which are lowest for whites and highest among rural Blacks. Since 1994 both the Department of National Health and the administrations of the new provinces have emphasized primary health care delivery, building in some instances on programs that farsighted medical workers instituted during the apartheid period.

The number of South Africans infected with HIV, the virus that causes AIDS, increased sharply during the 1990s, especially among Blacks, and, at the beginning of the 21st century, South Africa ranked near the top of United Nations estimates of proportions of national populations infected with HIV. In 2010 the country launched an aggressive HIV/AIDS program, unprecedented in scope, that addressed prevention, testing, and treatment of HIV/AIDS.

A highly sophisticated public health system exists in the cities and large towns. Some of the largest public hospitals are linked to the university medical schools, but those located in the formerly segregated Black areas tend to be overcrowded. Many of the more-expensive private hospitals are accessible only to those with higher incomes, still predominantly whites. Most regularly employed persons enjoy a degree of private medical insurance, but, because a high proportion of Black adults are not in formal-sector employment, reliance on insurance through employers produces a racially skewed pattern of access. By contrast, private general practitioners and specialists supply most needs for the most affluent. 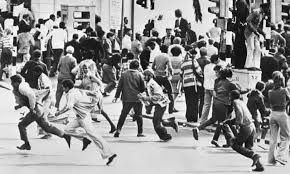 Government provides a number of welfare measures, among them small pensions for all citizens beyond retirement age whose incomes are below a minimal level. Large numbers of elderly Blacks, and often their dependents, gain a minimal livelihood from this system. In the past, welfare systems were administered separately for the different racial groups; the value of pensions was greatest for whites, less for Indians and Coloureds (those of mixed ancestry), and lowest for Blacks. During the late 1980s the differentials began to be reduced, and they were eliminated under the 1996 constitution.

Moral of the story: our weakness and division is what makes our enemy strong.

In addition The world community made South Africa a pariah because of its racial policies. The nation was forced to leave the Commonwealth, an alliance of former British colonies, in 1961. In 1985, both the United Kingdom and the United States imposed restrictions on trade.

White South Africans yielded to world pressure and domestic violence in 1990 by repealing most of the apartheid laws. Three years later, a new constitution gave people of all races the right to vote, and the following year South Africans elected a black man, Nelson Mandela, as president. 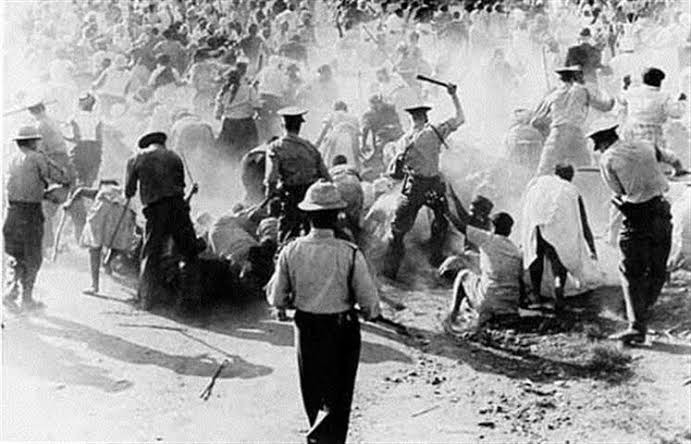 Remember Venda's forex trader with '203' girlfriends? He is now a pastor

She Made A Comparison Of How Good She Looks In Person VS In Pictures By Using Of This Guy's Pics.