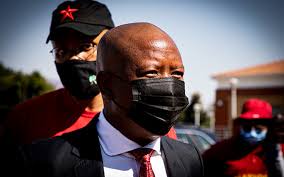 On Tuesday, the governing party ANC failed to get the bill passed into law after it was rejected by the National Assembly.

This after the political parties voted against it for different reasons. The ANC needed 267 votes to pass the bill into a law, but only managed to get 204. The bill would have resulted in the amendment of section 25 of the constitution to allow for land expropriation without compensation.

EFF commander-in-chief Julius Malema is one of the people who rejected bill saying his party rejected the constitutional amendment bill to allow for land expropriation without because it would set back black people's struggle for land repossession.

EFF, initiated the bill 2018 but voted against it, said the current version was watered down and was about transferring land to black people.

"The bill that this house is asked to approve today will take black people's struggle for land repossession many steps back". Said Malema.

Malema said his party tried to reason with the ANC on several occasions but was met with a cold reception.

Mzwandile Masina refuted claims that he wanted to join ActionSA

Kaizer Chiefs management and Sipho Mbule are on their final stages of an agreement, check the detail

A 15 year old suspect stabbed his friends mother to death