By NewsMaster07 (self media writer) | 1 year ago 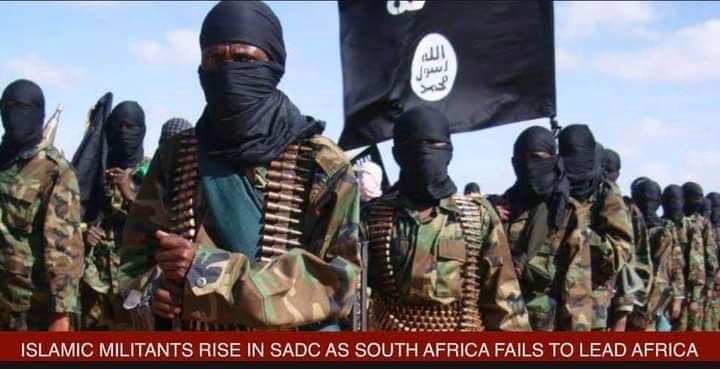 According to Rutendo Bereza Matinyarare, Over the past 15yrs, Mozambique discovered oil and gas that could be of great benefit to SADC’s economy.

Since this discovery, what are suspected to be US funded Islamic militants have advanced from Tanzania into Northern Mozambique where they seek to establish an Islamic Caliphate over the oil rich region.

In the center of the country, rebel group RENAMO which was created by the Rhodesian government and then used by the Apartheid and US governments to destabilize Mozambique and SADC to stop Azanian liberation fighters and SADC countries from launching a war against Apartheid South Africa from the frontline states, is on the rise again.

Throughout these developments, South Africa as self proclaimed big brother of SADC has stood by, failing to unite the region to stop this terrorist infiltration that will eventually spill over to destabilize South Africa and SADC to stop land expropriation.

Instead of focusing on this, some politicians in South Africa have chosen to partner the CIA and Ian Khama (descendent of a white British mother) to force regime change in Botswana and Zimbabwe for the west. Yet, when RENAMO was destabilizing SADC to stop MK and APLA fighters from attacking the Boers from frontline states. Zimbabwe set an example by sending its troops to neutralize RENAMO in Mozambique while also fighting apartheid sponsored Super Zapu and apartheid agents in Zimbabwe.

This was bolstered by the Angolans, SWAPO and Cubans routing the Boers, forcing them out of Angola and Namibia to negotiate independence with the ANC.

10yrs later, Zimbabwe would again lead 6 nations to stop Rwandan and Ugandan rebels from overthrowing Laurent Kabila, to bring peace to Congo through the Sun City Accord.

For such leadership in fighting imperialism and taking land, Zimbabwe was sanctioned by the west, leaving SADC in the hands of South Africa.

Since then, war has resumed in Congo while the South African army protects white mining interests there, Zimbabwe was crippled by sanctions and now Islamic militants are penetrating SADC as South African leaders look on.

Is South Africa a leader in Africa or is it just a tool of imperialism like the Boers, and do South African politicians appreciate that these same lslamic terrorists who are in Mozambique today will be used [by the same west they are supporting now] as retribution for the xenophobic attacks that South Africans visit daily upon the economic interests of some nations that are linked to these Islamists?

History tells us that for a century, Islamic leaders in the Middle East, Somalia, Nigeria, Sudan and other parts of Africa have been waiting to spread Islam through out the entire continent by conversion or war.

Now they are partnered with imperialists to achieve their agenda and they have reached our doorstep faster than we thought. Taking sides with any of those foreign parties will lead to the same result, recolonization and enslavement of black people as we see in Libya.

SADC’s problems are our collective problem as black Southern Africans, so let’s unite and stop assisting the west in destabilizing the region. Otherwise we run the risk of weakening our own defense as the Ngunis did with the Mfecane before the English began colonizing Southern Africa.

Content created and supplied by: NewsMaster07 (via Opera News )

Here Is Why Soweto Residents Have No Choice But To Accept Prepaid Electricity.

" I Went To Visit My Grandma, Then Boom " The Stove We Need During Load Shedding Stirred Up Tweeps

Everything is expensive, the prices of this basic need has gone up again

The news of record of high fuel amid rolling blackouts, people apologize to Zuma on Twitter, watch