Pictures circulating on social media, especially Twitter, show that some townships under the watch of the ANC is fast turning into slums and many people are not comfortable about it. Herman Mashaba have often hammered on the need to clean up South Africa in all ramifications, but the ANC often ignore the calls to clean up the country. A South African youth today shared the pictures of some slums in South Africa. He said, “You might be shocked to see that most of the people there are comfortable with that they’ve come to embrace it as normal, because come elections they’ll vote ANC the same people who don’t care about them”. He cried that despite all these shortcomings, many people said that they will continue to vote the ANC till Jesus comes. This is a clear resolution that they are comfortable with their living conditions. 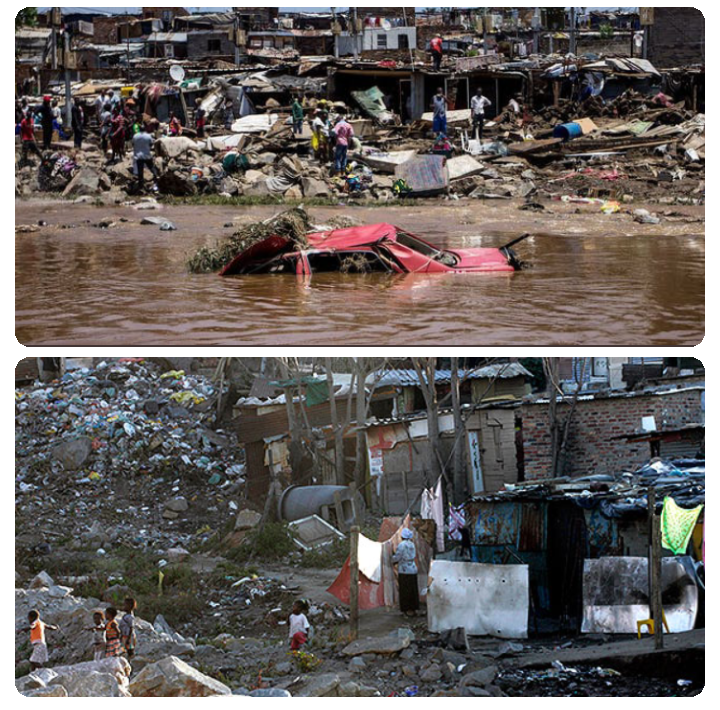 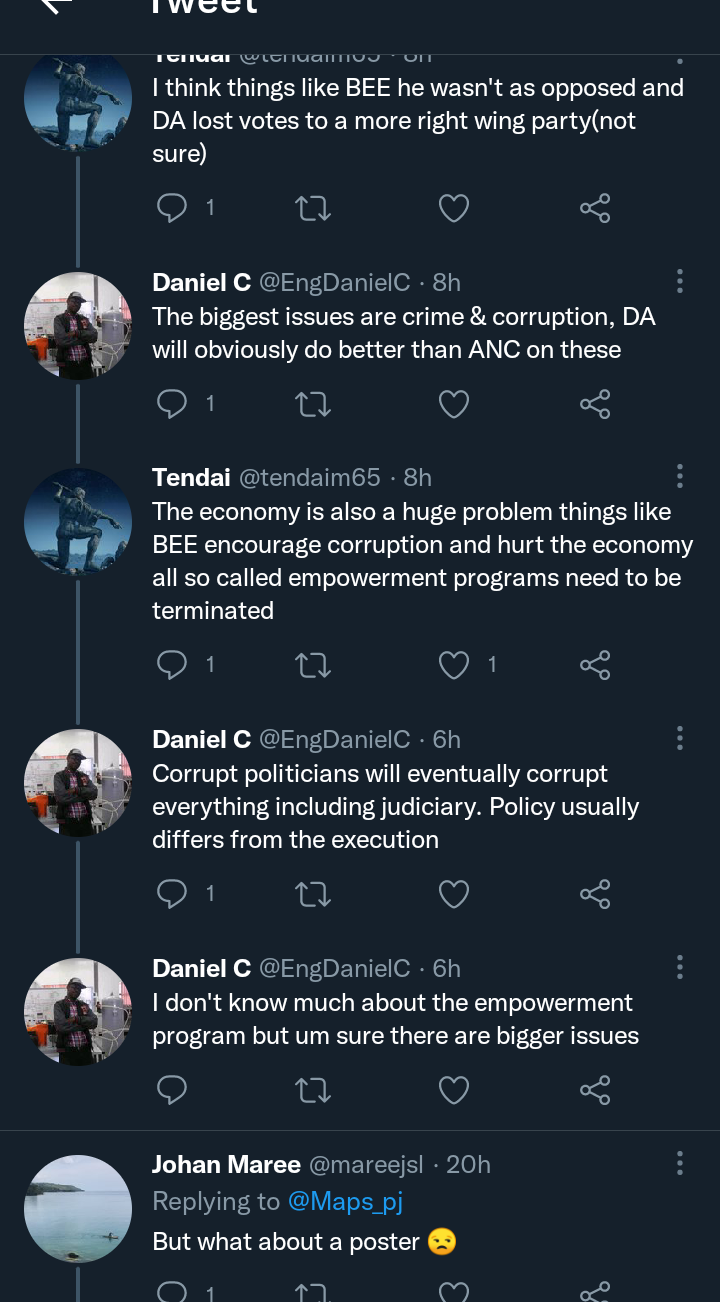 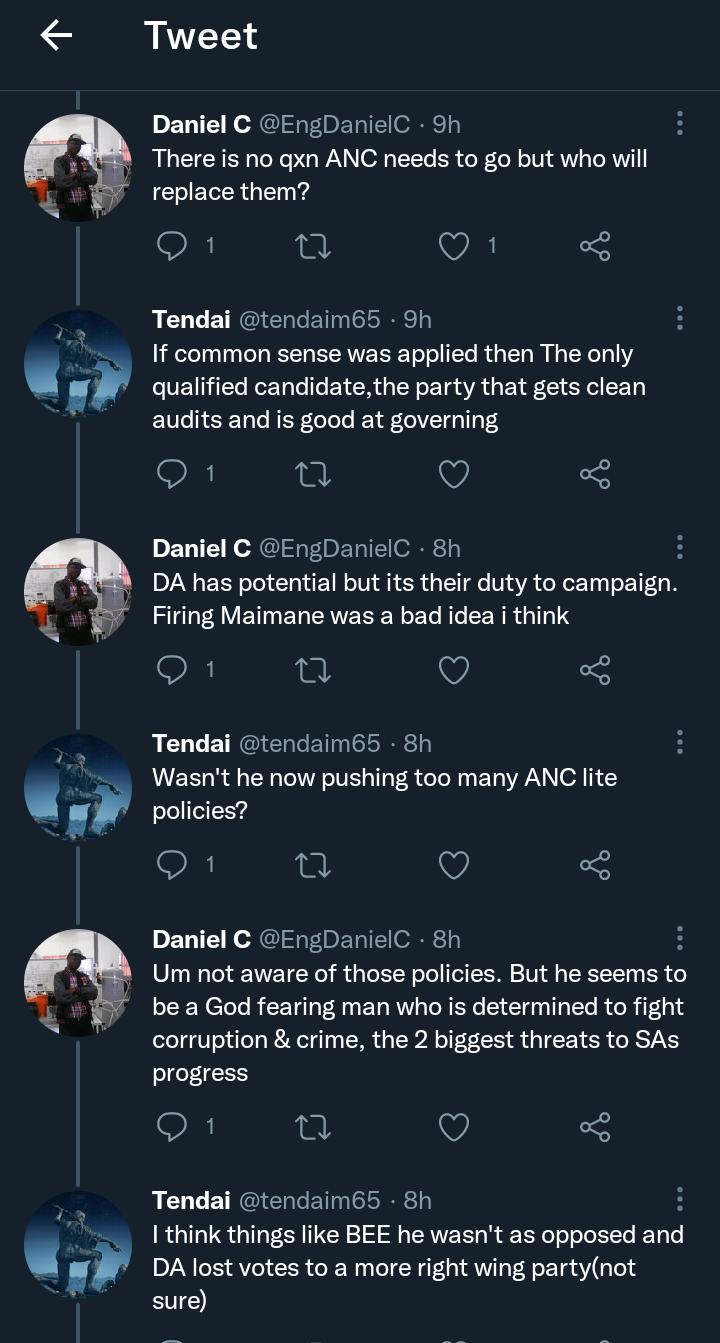 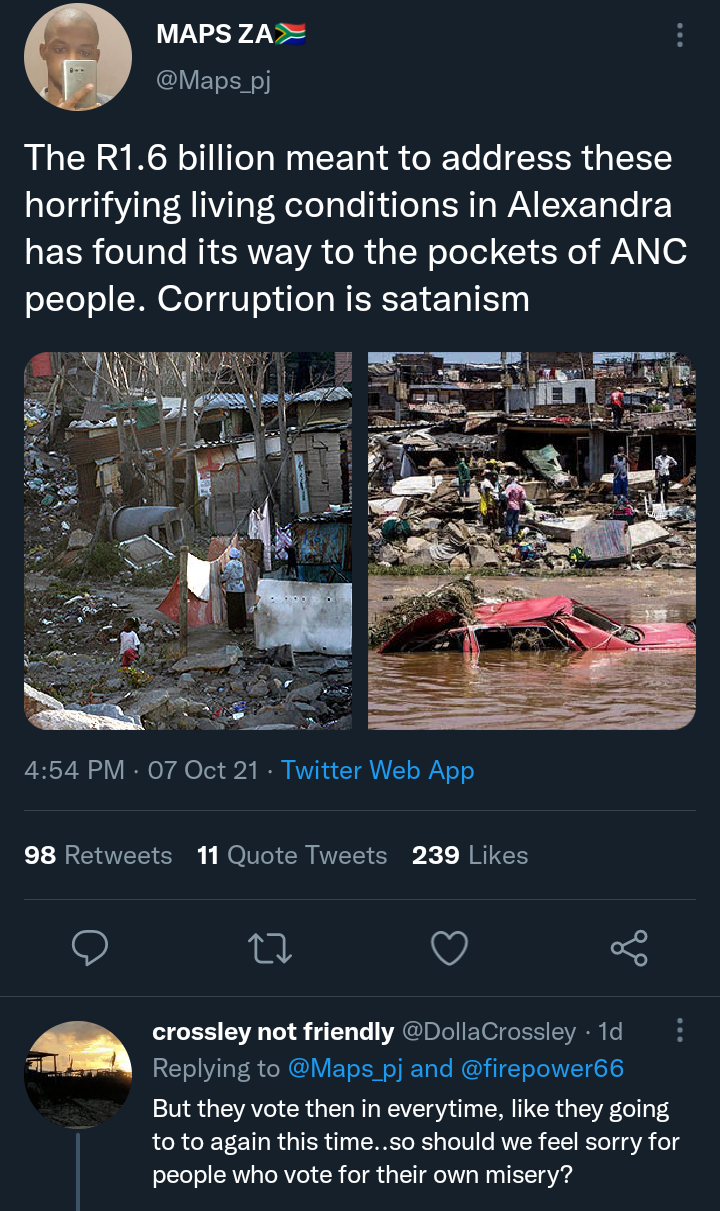 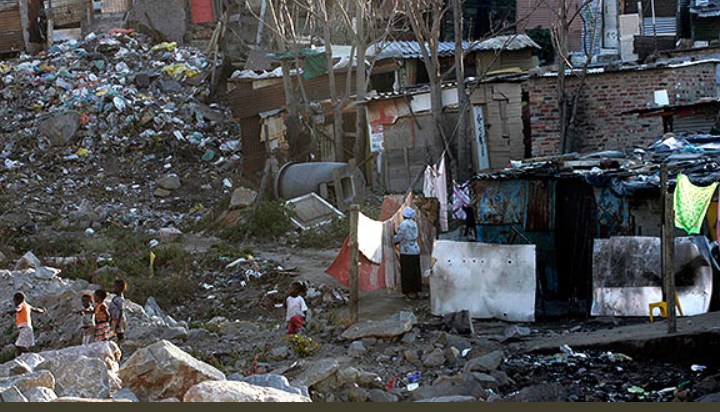 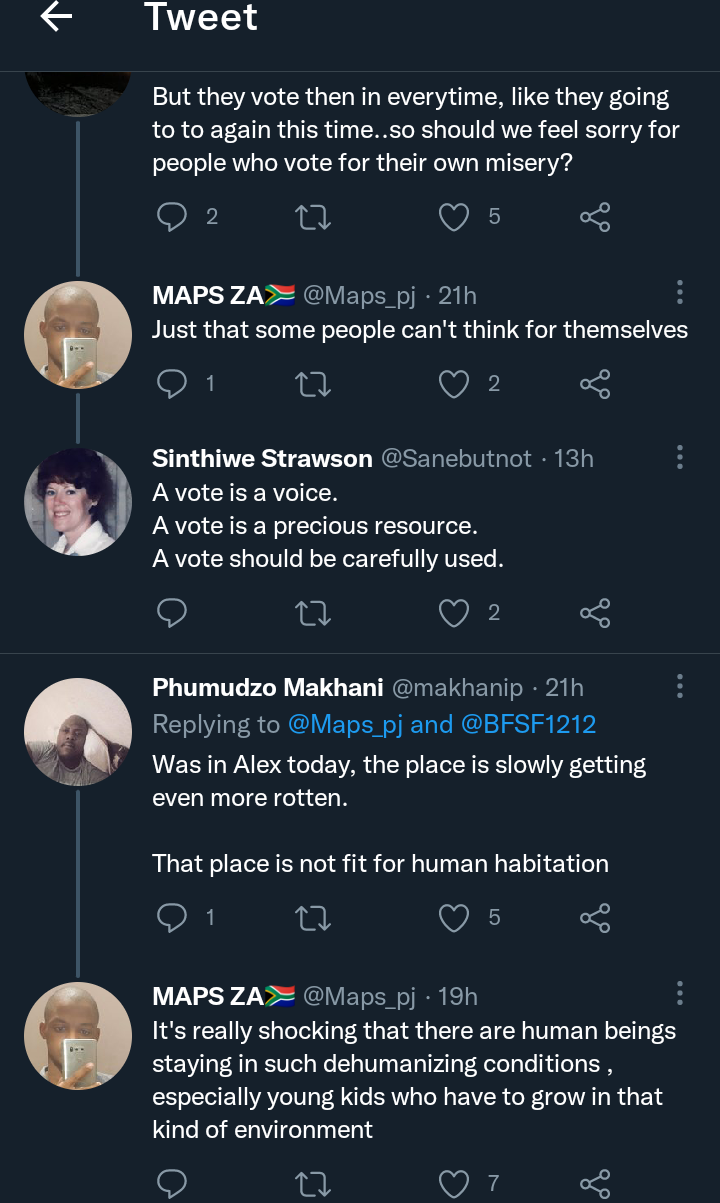 A South African youth said that it is a pity that people continue to vote the ANC, saying that these people in this slum are happy with what is happening to them. He lamented that politicians in the country have destroyed all the infrastructures they inherited from the apartheid regime. He said that until South Africans begin to think about the future of their generation. Furthermore, he said, “You might be shocked to see that most of the people there are comfortable with that they’ve come to embrace it as normal, because come elections they’ll vote ANC the same people who don’t care about them. Bro this is so heartbreaking because they don't see anything wrong bayakhankasa kuk'manje nje they take us for the ride in fact they don't see us. It's really shocking that there are human beings staying in such dehumanizing conditions, especially young kids who have to grow in that kind of environment”. 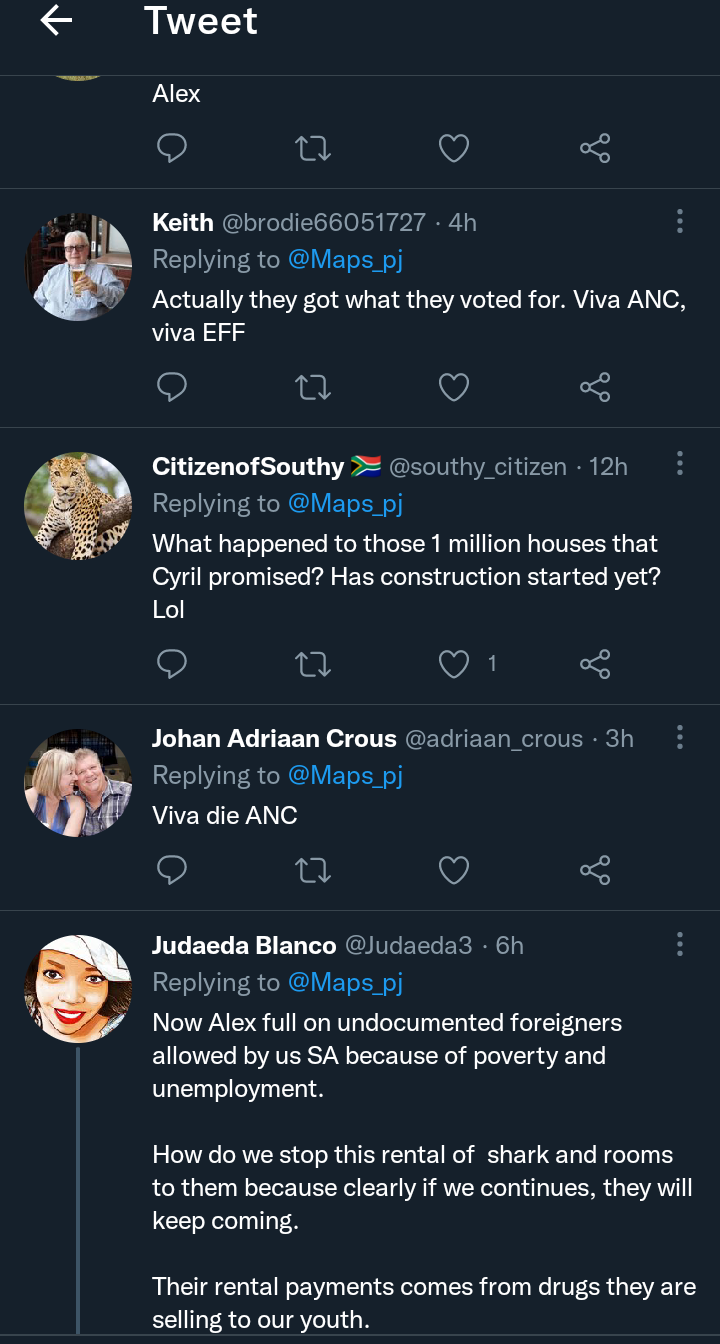 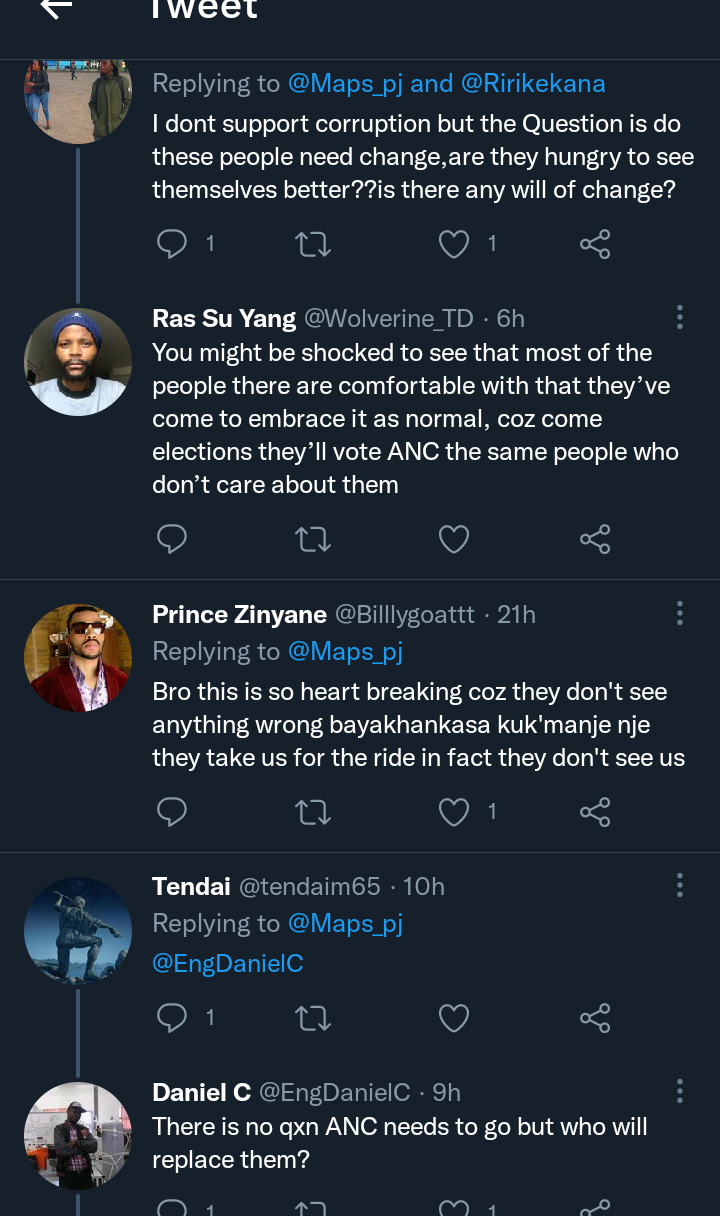 Many South Africans said that they are already searching for an alternative to the ANC, saying that they cannot continue to live in slum and a life of penury. They also disclosed that they are tired of fake promises from politicians, saying that their living conditions, poverty, and unemployment is making them uncomfortable. A lady said, “With the billions these fools have stolen, all the people in SA could've gotten a house. Think about it. It's a damn crime against humanity. Even Satanists have morals and a moral code. These politicians should not get aware of this. What happened to those 1 million houses that Cyril Ramaphosa promised? Has construction started yet?”.