By Rosiey (self media writer) | 2 months ago 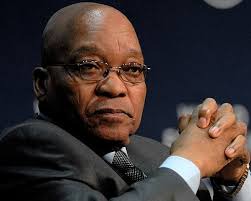 The Family of former President Jacob Zuma is said to be demanding that the he is released from prison.

The former President is currently serving his 1515-month sentence at Estcourt Correctional centre for contempt of court.

"We want Zuma to be released with no conditions". Said his first-born son, Edward Zuma, in a statement that was released on Thursday afternoon.

Last week the former President made his first public appearance since his imprisonment, when he went to attend his brother's funeral in Nkandla, who was buried last week Thursday. Michael Zuma died from a long illness a few days after Zuma began serving his sentence.

The Correctional Services granted Zuma compassionate leave, allowing him to be temporarily released under supervision to attend the funeral. He was later returned to the prison.

Edward has condemned the recent unrest in KwaZulu-Natal and Gauteng in which hundreds of people were killed, and hundreds of stores and warehouses looted, damaged and torched. The unrest began shortly after Zuma was incarnated.

Edward said the family has "accepted that we share our Father with the people of South Africa".

"We have always understood and still do, that any form of injustice no matter where and how it manifests itself, will always invoke him to come forward and perform his supreme duty to his first family, [which is] the people of South Africa, no matter how heavy the price.

"We cannot dispute that [the] South African constitution is a magnificent document created by Africans minds and African hands. Our Father, being the Pan-Africanist that he is, is proud of this magnificent document, which he dearly fought for". Said Edward Zuma.

He said the constitution reaffirmed that "dignity is an objective that an individual must pursue and further reaffirms one of the key pillars of the Freedom Charter, that the people shall govern.

"We therefore cannot take away the people's rights as enshrined in this magnificent document, as long as everything and everyone is acting within the confines of the law, including those who are supposed to administer and dispense the law. All our Father is seeking is justice.

"We will not accept [it] when people go to [the] extreme because we never sent anyone to do such. However, we want Zuma to be released with no conditions. We will fight this unjust action until our calls are heard by the law enforcement officers". Said Edward Zuma's statement.

Edward called on people to "continue to engage peacefully and desist from destroying infrastructure".

In an interview with TimesLIVE, last week, Edward would not be drawn on whether Zuma had been offered a Presidential pardon or the option of house arrest.

"That is a matter for another day. I cannot talk about that until the lawyers discuss that with you. But they are just exercising a very futile exercise". Edward said, at the time.