They Stopped Malema From Visiting. 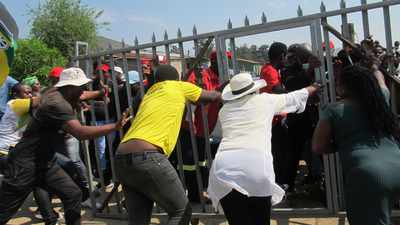 Malema on Sunday visited KwaDambuza and Willowfontein, Pietermaritzburg, where he was barred by the ANC from traveling freely. The move led Malema to suspect that the election would not be free and fair if other parties were not allowed to register freely.

This happened at about three polling stations, where some ANC members locked the gates. In another incident in KwaDabuza, EFF members were forced to form a circle to protect Malema, removing him from the polling station. To make matters worse, they hurled insults at one another.

Malema eventually left, accompanied by his bodyguards, to Willowfontein. He came across the same situation as the ANC had been following Malema in the city. He arrived at Thandokuhle, Willowfontein, where he was confronted by ANC members who had locked the gate and told him to go.

EFF secretary general Marshal Dlamini tried to intervene but to no avail. After an hour of fighting, the police arrived and resolved the situation. The center was opened and Malema was able to inspect it and leave.

The ANC's leader in the area, Sibusiso Mkhize, said people were fed up with the EFF's harassment of people calling for a suspicious vote in the area. He was accused of not doing things the right way.

“The EFF was bringing in non-residents to register to run in the elections. Our people are trying to stop that, ”said Mkhize..