The Line of Control (LoC) is a military control line between the Indian and Pakistani controlled parts of the former princely state of Jammu and Kashmir—a line which does not constitute a legally recognized international boundary, but serves as the de facto border. Originally known as the Cease-fire Line, it was redesignated as the Line of Control following the Simla Agreement, which was signed on 3 July 1972. The part of the former princely state that is under Indian control is divided into the union territories of Jammu and Kashmir and Ladakh, while the Pakistani-controlled part is divided into Azad Jammu and Kashmir and Gilgit–Baltistan. The northernmost point of the Line of Control is known as NJ9842. The India–Pakistan border continues from the southernmost point on the LoC. 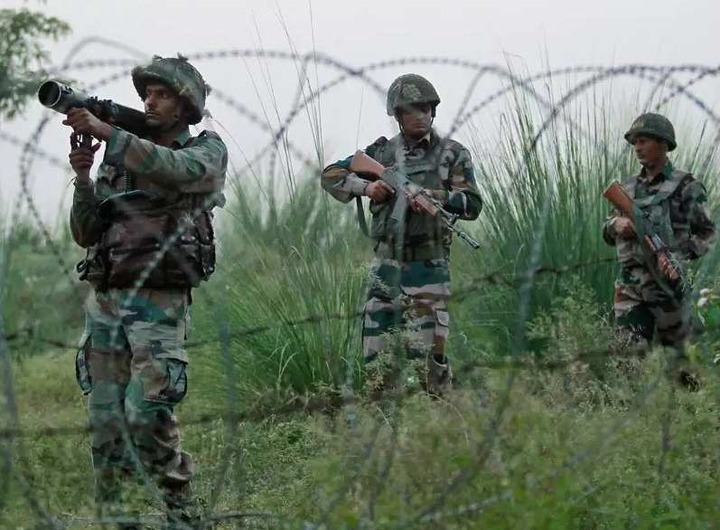 The areas shown in green are the two Pakistani-controlled areas: Gilgit–Baltistan in the north and Azad Kashmir in the south. The area shown in orange is the Indian-controlled territories of Jammu and Kashmir, and Ladakh, and the diagonally-hatched area to the east is the Chinese-controlled area known as Aksai Chin.

United Nations map of the Line of Control. The LoC is not defined near Siachen Glacier.

Another ceasefire line separates the Indian-controlled state of Jammu and Kashmir from the Chinese-controlled area known as Aksai Chin. Lying further to the east, it is known as the Line of Actual Control (LAC).

Former US President Bill Clinton has referred to the Indian subcontinent and the Kashmir Line of Control, in particular, as one of the most dangerous places in the world.[1][2][needs update]

The Line of Control divided Kashmir into two parts and closed the Jehlum valley route, the only entrance and exit of the Kashmir Valley at that time. This territorial division, which to this day still exists, severed many villages and separated family members from each other.

The Pakistan Declaration of 1933 had envisioned the princely state of Jammu and Kashmir as one of the "five Northern units of India" that were to form the new nation of Pakistan, on the basis of its Muslim majority. Pakistan still claims the whole of Kashmir as its own territory, including Indian-controlled Kashmir. India has a different perspective on this interpretation.

This section may be confusing or unclear to readers. Please help us clarify the section. There might be a discussion about this on the talk page. (November 2018) (Learn how and when to remove this template message)

Maharaja Hari Singh, King of the princely state of Kashmir and Jammu, agreed to Governor-General Mountbatten's[5][6] suggestion to sign the Instrument of Accession in 1947. India demanded accession in return for assistance. India claimed that the whole territory of the princely state of Jammu and Kashmir had become Indian territory (India's official posture) due to the accession; it claims the whole region, including Azad Kashmir and Gilgit–Baltistan territory, as its own.

India constructed a 550 km (340 mi) barrier along the 740 km (460 mi) Line of Control. The fence generally remains about 150 yards on the Indian-controlled side. Its stated purpose is to exclude arms smuggling and infiltration by Pakistani-based separatist militants.

The barrier, referred to as Anti-Infiltration Obstacle System (AIOS), consists of double-row of fencing and concertina wire 8–12 ft (2.4–3.7 m) in height, and is electrified and connected to a network of motion sensors, thermal imaging devices, lighting systems and alarms. They act as "fast alert signals" to the Indian troops who can be alerted and ambush the infiltrators trying to sneak in. The small stretch of land between the rows of fencing is mined with thousands of landmines.

The construction of the barrier was begun in the 1990s, but slowed in the early 2000s as hostilities between India and Pakistan increased. After a November 2003 ceasefire agreement, building resumed and was completed in late 2004. LoC fencing was completed in Kashmir Valley and Jammu region on 30 September 2004.According to Indian military sources, the fence has reduced the numbers of militants who routinely cross into the Indian side of the disputed state to attack soldiers by 80%.

Pakistan has criticised the construction of the barrier, saying it violates both bilateral accords and relevant United Nations resolutions on the region.The European Union has supported India's stand calling the fencing as "improvement in technical means to control terrorists infiltration" and also pointing that the "Line of Control has been delineated in accordance with the 1972 Shimla agreement.

In 2017, proposal for an upgraded smart fence on the Indian side were accepted, which would be first go through trial runs.

There are three main crossing points on the LoC currently operational. These are, from north to south:

Salamabad crossing point is located on the road between Chakothi and Uri in the Baramulla district of Jammu and Kashmir along the Indo-Pak LoC.It is a major route for cross LoC trade and travel. Banking facilities and a trade facilitation centres are being planned on the Indian side.The name in English translates to "bridge of peace" is located in Uri. The bridge was rebuilt by Indian army after the 2005 Kashmir earthquake when a mountain on the Pakistani side had caved in.[16] This route was opened for trade in 2008 after a period of 61 years.The Srinagar–Muzaffarabad Bus passes through this bridge on the LoC.

A road connects Kotli and Tatrinote in Pakistan side of the LoC to Indian Poonch district of Jammu and Kashmir through Chakan Da Bagh crossing point.It is a major route for cross LoC trade and travel. Banking facilities and a trade facilitation centres are being planned on the Indian side for the benefit of traders.

The Teetwal crossing is across the Neelum River between Muzaffarabad and Kupwara. It is usually open only during the summer months and in contrast to the other two crossings is open only for the movement of people, not for trade.

Two further crossings are at Haji Pir pass and one near Tattapani, but these are currently not operational.