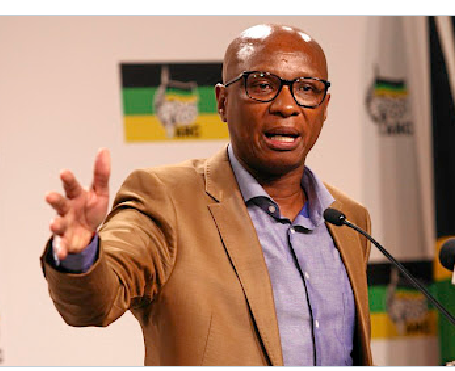 Deputy Minister of State Security Zizi Kodwa says he has started to repay the R1million “loan” from EOH, but can’t reveal how much has been paid back so far. Is EOH an "authorized financial services provider”?

Imagine if you can just walk into EOH and ask them to borrow you money because you didn’t get paid. How will you repay us, Sir? Corruption is well and alive in South Africa. At the Zondo Commission, his explanation for not having paid the so-called loan is that, a Ministerial post is not stable; therefore he can't pay back the loan. What has changed? It doesn't need a rocket scientist to see that this is fraud, Must be nice…

Let's all steal, when we get caught, we negotiate a payment arrangement.

Ordinary SAns would be in much deeper trouble with the law than just to repay discreetly, he is in denial, he's probably seen too many bounces back that he sees himself in that light. Others are paying back while others are being arrested and step aside, double standard, One of the highest income earners in South Africa “borrows” money from a private company with no signed loan agreement, of repayment terms or interest rate.

The same company that admitted to earning billions from corrupt tenders.

And he expects us to believe he is honest. We are not worried about that, the fact he is corrupt, the Rhino Zondo has found him corrupt and not suitable to be in that office, Okay like we use to believe this gentleman. People who borrow other people’s money shows they can’t manage their finances. Why are they in leadership positions? We entrust the minister of the states' security with so much responsibility, if Isis gave him R3m he would take it because he needs to pay omashonisa that art authorised. When was he supposed to pay according to the loan contract? How per month? What stopped from paying as per contract. Smith paid back the corrupt money, he is in and out of courts, why this one same thing can't happen to him, He must stop lying and put it on the way he received, it’s not a loan but “kickbacks” for pulling through a big state tender for the company. How is his different from Vincent Smith's? Have you guys asked Hawks and NPA what's the difference? Former President Jacob Zuma spokesperson is embarrassing the President Matamela, He must provide proof of payment and the source of that repayment money. @MYANC cadres can never be trusted, He learned from the Cr17bank statement. And the alleged farm crime. That you don't disclose to the public. Classified for you and your bosses, becoming a great person in life do take time, but time awaits you, so get started with @_JamesAlderson He's actually the best in the stock market. A highly recommended broker.

Dlamini-Zuma and Lindiwe Sisulu Joins forces, Look what they have in plan for ANC