By HomeAway (self meida writer) | 1 months

Ndumiso Masimula, the Lomahasha Member of Parliament (MP) has urged emaSwati to encourage their MPs in their various Tinkhundla Centres to vote for the amendment of the Constitution in Parliament. 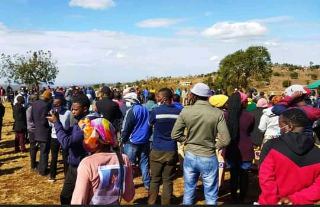 Speaking here at Lomahasha during the funeral of Mcolisi ‘Sigubhu’ Nyoni, one of the two residents who were gunned down by a police officer for criticising King Mswati, the MP said change was near and they only needed a majority vote in Parliament in order to amend the Constitution.

“We are about to cross the bridge, engage your MP wherever you are, we need their vote in Parliament. We need all the 59 MPs to vote for change in order to beat the appointees in Parliament, in that way we will achieve a bloodless revolution”, said the MP.

Questions were to Government Spokesperson Sabelo Dlamini, however, he had not responded at the time of compiling this report.

Also speaking at the funeral, Mlungisi Makhanya, the President of the People’s United Democratic Movement ( PUDEMO) pledged his commitment in the fight for freedom and also encouraged the youth not to stop fighting for same.

“As PUDEMO we commit to bring an end to the royalty’s grip on our land and resources, King Mswati will never know peace as long as he is suppressing us. To the youth; the fight is in your hands”, he said.

Mcolisi ‘Sigubhu’ Nyoni and Mpostoli Masilela were shot by Constable Sehlakalo Dlamini last Sunday for criticising King Mswati. Nyoni has been laid to rest this afternoon while Masilela will be buried tomorrow afternoon.