Destroyed Parliament building was not insured

The National Assembly working in Parliament area annihilated by fire wasn't protected, passing on the enormous expenses to revamp to the citizen.

The fire broke out on January 2 and saw something like 300 firemen battle the furious burst for two days.

As indicated by the Sunday Times, Department of Public Works acting chief general Imtiaz Fazel on Tuesday broke the news to National Assembly Speaker Nosiviwe Mapisa-Nqakula and ideological group delegates, letting them know that the places of Parliament don't have protection cover.

The City of Cape Town's primer report into the episode uncovered how Parliament wasn't agreeable with fire wellbeing guidelines and had remiss security when prompting the fire breakout.

It observed that sprinkler valves had not been adjusted beginning around 2017 and that the fire entryways in Parliament were not as expected shut when the fire broke out.

The modest locking set on the fire entryways exacerbated the fire which then, at that point, immediately spread across the structure.

Fazel let the paper know that guaranteeing the State's property arrangement of in excess of 82 000 structure worth R141 billion was excessively expensive.

In spite of the fact that he was unable to assess the expenses needed to revamp the National Assembly, Fazel let the government officials know that public works would need to make an application for financing.

Fazel added that the State is answerable for remuneration for all expenses and claims, as indicated by Treasury guidelines.

Public Works Minister Patricia de Lille said Mafe was gotten on camera at around 2am on the day the fire broke out. 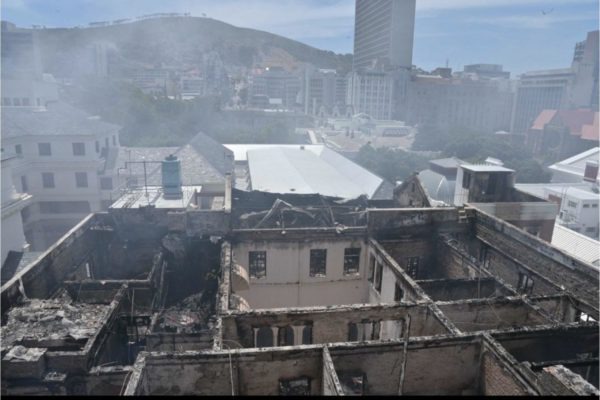 The Cape Town Magistrate's Court deferred the situation to Tuesday.

Parliament representative Moloto Mothapo said managing officials got the condemning report into the fire and would just remark after the Hawks' examination is finished up.