Fiction: The Brave Man Who was Not Afraid Of Crocodiles, See This !

By Siyabonga19 (self media writer) | 1 year ago 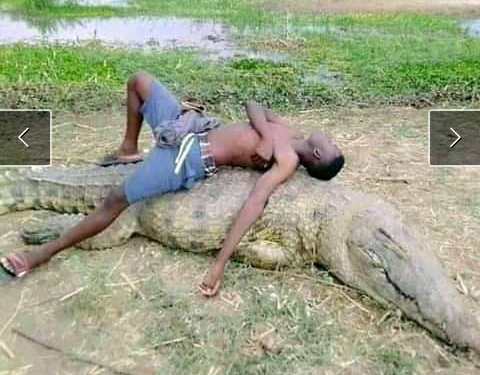 Tarzan was the brave guy who was not afraid of crocodiles and in his village he was praised for his bravery.

Tarzan was a guy who live by hunting from forests and sometimes do hunting from big rivers. Tarzan was not a guy who had any weakness he was strong and his muscles and they were bit muscular.

When he hunt from the forest he can fight with lions and angry baboons and win the fight, He was not a guy who was afraid to die. In his village he was one of the man who was responsible to protect people from the village.

When he hunts in the river he swim's with the treacherous crocodiles and Big river snakes. He was truly gifted. One day he decided to hunt a crocodile, it was a fight between dead and living.

He was not aiming to be defeated because his bravery and talent to fight gives him a massive wining rates. He managed to kill the crocodile and that day he was called the village warrior.

Tarzan is now seen sleeping near the crocodiles as a sign of showing that he is not afraid of anything and nobody can stand in his way.

Content created and supplied by: Siyabonga19 (via Opera News )