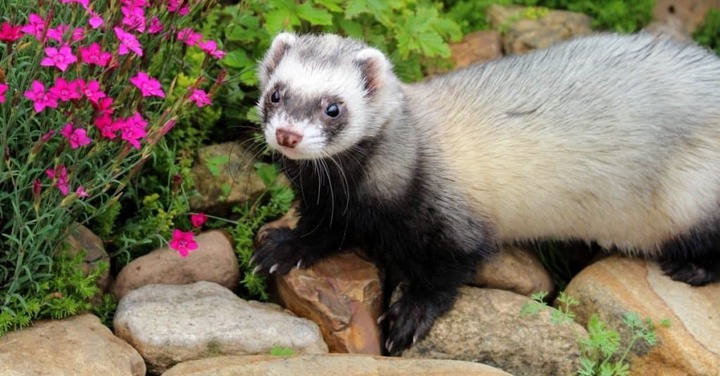 Ferret’s popularity is on the rise in the United States. More and more families are welcoming the furry little creatures into their homes.

But they’re not for everyone. For starters, ferrets need large cages, and they don’t do well in apartments. Plus, they can be nippy and aren’t great with small kids. Apart from that, their needs are minimal. Ferret food is available at most pet stores, and they only need a bit of time outside their cages each day.

On the upside, ferrets are very smart. And once they are bonded to a human, ferrets can be very snugly and lovable.

If you’re in the market for a non-traditional pet but don’t have tons of room, look no further than the leopard gecko. Their name derives from the species’ leopard-like spots. However, unlike the big cats, leopard geckos are friendly and pleasant with humans!

A 10-gallon tank is all the space they need to live a good life. Moreover, unlike other lizards, they don’t need a UVB lamp. But make sure you wash your hands after handling one because they are salmonella carriers.

Originally from the Chilean highlands, chinchillas are incredibly soft rodents, and increasingly, people are taking them in as non-traditional pets. But like many “exotic” animals, caring for a chinchilla takes a bit more work than a dog or cat.

Firstly, it’s always wise to get chinchillas in pairs, as they prefer constant company. And despite their pint-size, chinchillas need lots of room to frolic. Plus, their grooming needs are out of the ordinary. Instead of water baths, chinchillas take “dust baths.” Owners buy a special volcanic rock formula that chinchillas use to clean themselves. Then, several times a week, you must prepare a bed of it in which your child rodents roll around. As you might imagine, it’s a pain to clean up.

Hedgehogs are super pets for introverts. The non-social bundles of fur have a simple diet and require an enclosure similar to a guinea pig’s pen. But only welcome one hedgehog into your home at a time because they don’t like sharing spaces.

You can pick up hedgies from pet stores across the country. Keep in mind, though, that hedgehogs bred as pets are slightly different than those in the wild.

What’s the biggest drawback of hedgehog ownership? They have weak bladders, which means you’ll be spending a lot of time cleaning out their enclosures.

Big ears are typically seen as less than attractive, but on Fennec foxes, they’re up there on the cuteness chart with Baby Yoda — excuse us, Grogu.

Fennec foxes, which are more cat-like than dog-like, need lots of care and space. Most people who keep them as pets build large outdoor enclosures. But they can’t spend all their time caged up. Letting them out at least once a day is a must.

Fennec foxes can be litter trained like domestic cats, but their wild roots still dominate. If you take Fennecs to the dog park, don’t let them off-leash — for both their safety and that of the other dogs.

For those who are a little more rock-n-roll, an emperor scorpion may be the perfect non-traditional pet. These African natives sport huge front claws and grow to about 8 inches. Unlike Indian red scorpions, emperors’ venom is very mild. Plus, individuals of the species are almost always docile. Despite their “gentle” natures, scorpions are more of a look-don’t-touch pet because they don’t love being handled.

Emperor scorpions are fairly easy to care for. They can be housed in a 10 gallon glass aquarium tank, and would need 3-6 inches of bedding such as peat, soil, or vermiculite to allow for burrowing. It’s also good to provide some spots for hiding, like flat stones, broken flower pots, or reptile hides. They usually feed on crickets, meal worms, and moths.

We’d be remiss not to include a word of caution here. Even though emperor scorpion venom is mild compared to other species’ loads, some people are very allergic to it, and a bite could send victims into anaphylactic shock.

Yes, some people keep skunks as pets. They may stink to high heaven, but the little rascals are pretty cute. Plus, they’re very affectionate when bonded to people.

Capybaras are the kindest animals of which you’ve ever heard. The highly social and oversized rodents regularly top friendliest animal lists. But, they’re not the easiest to keep as pets. Capybaras need lots of room and a wading pool. Moreover, since they’re unfailingly social, you can’t have just one capybara. He or she will quickly become depressed, even with human companionship.

For those with the requisite space and time, however, capybaras are lovely animals that exude peace, love, and understanding. But there’s one major caveat: only people in Texas and Pennsylvania can keep them as pets!

For those who can afford them, llamas are the new designer pet. The South American cousin to the camel, llamas are one of the few animals that people can safely hug. Moreover, they’re so attuned to human emotions that Andean peoples call them “silent brothers.”

But as you’d imagine, keeping llamas requires lots of property and food. And, like many non-traditional pets, it’s never wise to get just one. They need a friend or four to be truly happy.

Sugar gliders are “flying” marsupials about the size of gerbils. The curious animals need lots of toys and large enclosures to live their best lives. They also like to spend oodles of time with their people when kept as pets.

However, if you’re plagued with olfactory sensitivities, sugar gliders may be offensive to your senses. Plus, they’re talkative and will chatter through the night.