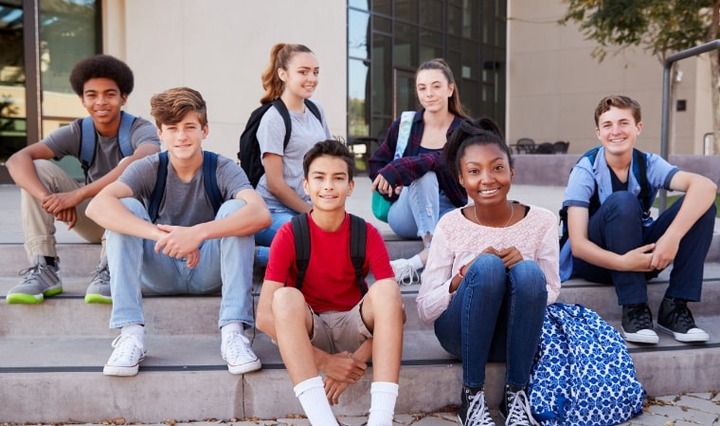 Puberty can be a scary time for kids, especially when they don’t know what to expect. So it helps kids when parents can talk about puberty in a natural, everyday way. This helps to normalise puberty for them and prepares them for the changes that will be coming their way!

1. You will experience both physical and emotional changes

Our first puberty facts reminds us to NOT just focus on the physical changes.

It isn’t just your body that changes as you go through puberty. Your brain and your feelings change as well. So your child needs to know that they will start to think and feel differently as well. This article from Hey Sigmund explains what teens need to know about the adolescent brain.

So make sure your child knows what changes will be happening to their body (read about the stages of puberty for males and females), as well as the fact that their feelings will change as well.

2. Puberty is normal and happens to all kids

Our second of the puberty facts is all about making puberty a normal stage of life.

3. Puberty means your body can make a baby

Our third puberty facts is about the true purpose of puberty.

Puberty is all about making us capable of reproducing and starting the next generation. Which means that your child’s body will eventually be capable of creating a new life ie they are fertile. So they need to know this, that if they had sexual intercourse with someone of the opposite sex, that they could make a baby. Reassure them though, that even though their body may be ready that they still need to do a lot more ‘growing up’ before this will happen.

Our fourth of the puberty facts is about reassuring kids that the changes are very gradual!

Reassure your child that the changes that will be happening to them, don’t happen overnight. They happen over months. Which means that they will have plenty of time to get used to them! So start talking to them about how to care for their body as it changes. When you start to notice an underarm smell, buy them deodorant and start chatting about why they sweat and how they should manage it.

5. Puberty happens to both boys and girls (males and females)

Our fifth puberty facts is about making sure they know that puberty is a ‘similar yet different’ experience for both boys and girls.

6. Puberty starts at a different time for everyone

Our sixth puberty facts is about reminding kids that we all start puberty at a different time.

Let your child know that we don’t all start puberty at the same time. Some kids start much earlier or later than others. Which means that some kids will be much taller than others, and some kids will be flat-chested whilst others are needing a bra. Everyone is different so their body will start changing when it is ready to. You can’t make puberty start any earlier or stop it from happening. Your body knows what to do and will start when it is ready for it.

7. Changes can happen quickly or slowly

Our seventh of the puberty facts are that their body may change more quickly or slowly than their friends does.

Some people’s bodies can change more quickly or slowly than others. So their friend may have lots of pubic hair within a few months whilst it may take months for them to just grow a few! Everyone is different but by the time puberty is over, everyone has had the same changes, and end up with similar adult bodies.

Our eighth puberty facts is that everyone is different and that’s okay.

Your child needs to know that although the changes we go through are all the same, that they can still be different. So that may mean they have no pimples or lots of pimples. And there is nothing that they can do to change that. It is a bit like a lucky dip – you get what you get!

Talking strengthens your connection with your child

9. You can’t stop or alter the changes that will be happening to you

Our ninth of the puberty facts is that you can’t stop or change anything.

Some kids worry about the changes that will happen to them and want to know if they can stop them, or even change them. They can’t. Their body is already pre-programmed to change in a certain way. Which means that they will end up with the body they are meant to have.

10. You will start to think about sex differently

Our tenth puberty facts is that they will start to experience sexual feelings and to possibly even see their friends in a different light.

As well as making your child’s body fertile, puberty will slowly start to change the way they think and feel about sex. This happens for a very good reason. For a baby to be made, you usually need to have sexual intercourse. So puberty will rewire your child’s brain so that they will want to have sex, which means that they might fall pregnant and make a baby. Even though we live in the 21st century, our caveman instincts are still there.

Possible New Coach For Orlando Pirates Has Been Announced,

5 Sweet Fruits That Has Poisonous Seeds

5 Natural Fruits That Can Cause Miscarriage

3 Reasons Why Some Men Die When Making Love

The Best Spices To Cook With