A 14-month-old baby's mother is demanding answers from the childcare facility after her child's ear was cut off during routine care. 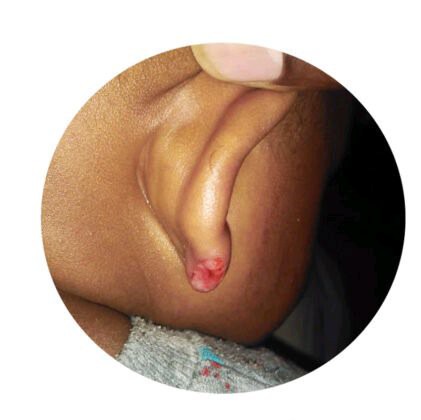 Her 14-month-old baby was found torn from the ear tissue, and when she inquired of the teachers, they said she had been bit by another two-year-old. Her heart was broken. One of Ayabonga's parents, Ntombikhona Mavela (31), expressed her biggest fear about the KwaDabeka crèche, which we have decided to withhold, was whether or not they would care to notify her and take the child to the doctor if an accident occurred on March 3. The crèche will be closed if the child is hurt.

In anguish and unable to be helped, my baby was injured around 10am and began crying uncontrollably. In response to my inquiry as to why they had not taken her to the clinic, they explained that they were running low on personnel and were hesitant to call because they knew I would be surprised by the size of it. Mother: "When doctors tell my baby's ear is torn, it will grow and its ears won't be exactly the same, because the cut flesh won't come back." His mother, he claimed, didn't even phone him to tell him her child had been hurt, and she continued writing him a letter and stuffing it in the baby's backpack as a form of communication.

The scar on my child's leg will be there for the rest of his or her life." Now that the child has been injured, it is being utilized as a means of abuse by simply fighting and biting with it. It's not uncommon that children are abused in kindergartens by domestic workers who are well-known for their bad behavior. What do we do with them if we can't keep up with the workload? "I even want the minister to intervene, my child has been given justice," said the kindergarten principal. The principal declined to comment because he said he hadn't commented on the matter.

According to him, "We had an interview with the parent and he asked for compensation; we discussed this with him, therefore I don't want to talk about it anymore." Police spokesman Lt.Colonel Nqobile Gwala said KwaDabeka police were investigating an allegation of child abuse in KwaZulu-Natal. No arrests have been made yet, he stated. If the incident is indeed true, an education department child care worker will investigate the crèche and the mother of the child to see what should be done about it, said KwaZulu-Natal Department of Education spokesperson Muzi Mahlambi.