Eunice, a native of Nairobi County who was born without legs, sadly confides in her caretaker about the time her partner cheated on her. 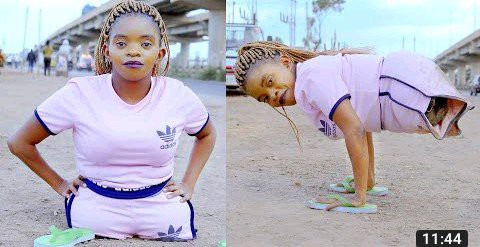 Eunice's mother opted to take her to live with her grandparents after Eunice's father passed away because she didn't have a reliable source of income. She eventually enrolled in primary school, and according to her, it wasn't until class six that she realized she was unique from the other students.

She observed that some activities, such as running, she couldn't participate in like her fellow students. She claims that when one of her classmates questioned why she lacked legs, it deeply affected her. She broke down and went to her grandparents' house, who informed her that she was not as fortunate as they thought.

Even though she felt out of place, life went on, and she asked to be moved from the school to one that had children with disabilities like hers. She completed her studies and enrolled at a university, but her health made finding employment difficult.

Later, she relocated to her brother's home since she felt like a burden to her elderly grandparents. Since her brother was at work, a relative offered to come and assist her. She eventually met a man, and the two of them got married after falling in love. He used to visit her almost every day, until the unthinkable occurred.

When she got home one day, he was cuddling up to her caretaker on the couch. They feigned not to be doing anything after seeing her since they were astonished.

I loved him so much that those events were the most terrible of my life," Eunice claims. Later, the boyfriend left without giving a reason, and when she tried to call him, he told her to erase all of the images and never call him again. The caregiver, according to her, apologized because she was embarrassed. Though horrified at first, she later forgave her. Life went on, but she claimed that because of her illness, it was now challenging to get work. She is begging well-wishers to help her start a cosmetics company because it is her area of love and to move into her home because her brother is soon to be married and she doesn't want to be a burden to him.