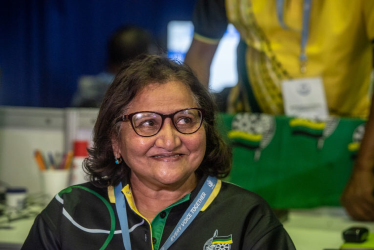 The greatest failure in this political decision is the Democratic Alliance (DA), not the African National Congress (ANC), says the party's acting secretary-general Jessie Duarte.

Duarte said the party was baffled with regards to the low citizen turnout and said they had anticipated that young people should come out and have a say at the surveys.

"At the point when we did house to house, plainly there were issues that would relax our votes. We've lost 12% of our help starting around 2016 races. What is significant is that we will proceed with the restoration cycle of the ANC in light of the fact that that is the thing that allies are saying: 'fix the ANC', and they have acknowledged that we began with the thought of local area choosing their own councilors. That was a major issue on the ground," said Duarte in a meeting with EWN on Tuesday evening.

"Also it was the force issue. The way that Eskom had power outages truly harmed our help base. Coronavirus likewise had an effect in certain spaces. There's been outrage which we recorded and enrolled and saw that this would be a troublesome political decision for us."

FF+, DA prepared to go along with others to save Mangaung, yet EFF not wanted

While the ANC lost votes because of individuals not coming out to cast a ballot, the DA was the greatest failure, said Duarte.

"What has happened however in this political race however is that the greatest failure isn't the ANC, it is the DA. They have lost considerably more ground than we have. We've won a great deal of our wards. In Johannesburg it is the Soweto factor and the power issue, we can't reject that. With Tshwane we've made a few increases and I figure we should trust that the outcomes will be finished. We actually have a decent outlook on Tshwane. In Ekurhuleni, we're still where we were," she said.

As at 10:45pm on Tuesday, the decision party was still beneath half, with 56% of the public votes having been counted.