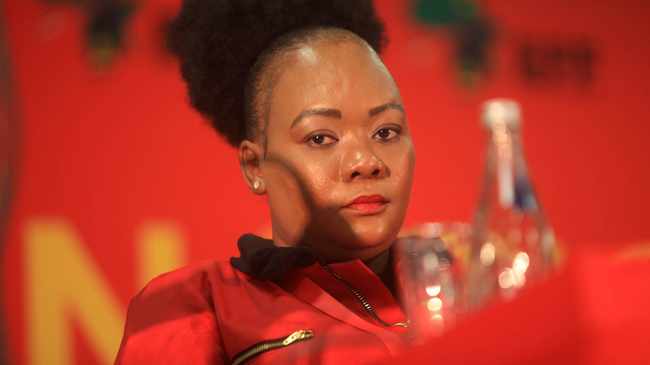 Johannesburg - The EFF has excused cases that it hosted been repudiating the Political Gathering Funding Act following its inability to make monetary revelations to the Electoral Commission of South Africa (IEC) for the past quarters after the demonstration became effective in April.

EFF financier general Omphile Maotwe was tending to the media after the DA communicated worries that the party – which as of late gave a Mercedes-Benz worth R1.8 million to AbaThembu King Buyelekhaya Dalindyebo – was not among the six ideological groups which made revelations to the electing body.

In her answer to the claims, Maotwe said that the ANC were the central modelers of the demonstration however they were currently lamenting their choice to pass it into law.

As per Maotwe, the ANC supposedly instituted the law to rebuff the EFF, saying "we cautioned them about the ramifications of the demonstration".

She was likewise inflexible that EFF had not gotten any assets from the Oppenheimers or the Ruperts like ActionSA and the DA.

"Our political race subsidizing came from commitments made by our councilors and parliamentarians. We utilized their commitments to run an effective races crusade. We didn't get cash from the Oppenheimers or the Ruperts," she said.

In her party's protection, Maotwe let the media know that her party didn't get gifts of R100 at least 000 during the first and second quarter of the period, obliging them to make such revelation to the IEC.

Maotwe additionally said that the vehicle gift to King Dalindyebo and the acquisition of their base camp Winnie Mandela house in Gandhi Square was made conceivable through their great relations with specialist organizations.

She, in any case, affirmed to the media that the circumstance changed in October when a few benefactors made commitments to their party money vaults which would now expect it to spread the word about such gifts by the IEC.

The IEC has, notwithstanding, cautioned ideological groups like the EFF, FF+, IFP and other people who neglected to make revelations to do as such before the finish of the monetary year.

"At this stage the commission isn't engaged to test non-exposure or power ideological groups to reveal.

"We ask South Africans to delay until the finish of the monetary year for a report from the Commission which will specify all exposures made and manage non-revelations by ideological groups taking note of that the Act gives both crook and common approvals which might be dispensed by courts," IEC representative Kate Bapela said.

She said in the mediating time frame, the onus rests with ideological groups and elements making declarable gifts inside as far as possible per contributor, to uncover such gifts to the commission on a quarterly premise.

EFF insists: Party’s councillors and parliamentarians paid for the party’s election campaign - and not donors (iol.co.za)