Subsequent to precluding the ANC as a potential alliance accomplice in hung city committees, ActionSA on Tuesday uncovered that it had held casual alliance chats with both the Democratic Alliance (DA) and the Economic Freedom Fighters (EFF). 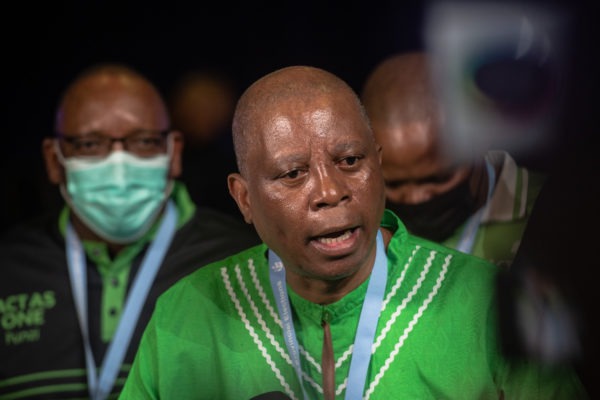 In any case, ActionSA's leader Herman Mashaba, talking at a media preparation in Johannesburg, said they were not frantic to go into alliances.

He said his party was "glad to be in the resistance seats" if they don't observe alliance accomplices that will work with them.

"For us as ActionSA, the 2.6% democratic pool that we got we don't actually underestimate it. We are here as the workers of the 2.4 million individuals who decided in favor of us," Mashaba said.

Mashaba said the alliance state-run administrations that arose after the 2016 civil races were a debacle and his party didn't need a rehash. He approached all gatherings that needed to draw in with ActionSA to treat them with shared regard.

"I truly need to beg ideological groups needing to draw in us, kindly connect with us showing common regard. I believe it's vital on the grounds that we accept unequivocally that the main way we can succeed is in the event that we recognize one another," he said.

ActionSA's Gauteng administrator John Moodey, who structures part of the party's alliance arrangements group, said they held a gathering with the DA on Friday about framing an alliance in the City of Tshwane.

Moody said the gathering was gone to by the DA's government committee administrator Helen Zille and her representative, Thomas Walters.

"What's more, that was, even more, a connect sort of meeting, which was exceptionally short in, all things considered," Moodey said.

He said ActionSA's exchange group interrogated the DA concerning why they left out the City of Johannesburg as a component of their discussions.

Moodey said he was astonished by media reports that the DA wouldn't fret about having Mashaba as the mayoral possibility for Johannesburg since this was never raised during their gathering.

In spite of this, he said ActionSA stayed open to additional alliance chats with the authority resistance.

"In any case, we stay open to impart and examine what is to the greatest advantage of individuals of South Africa in general, and all the more explicitly in the districts that we have challenged in Johannesburg and Tshwane.

"Eventually, we need to provide for individuals what is simple and appropriate for themselves and to guarantee that we have a prosperous future that depends on steady, perfect, productive, and compelling administration," Moodey said.

Alliance chats with the EFF

Moodey said they held a gathering on Monday with the EFF's arrangement group, however they communicated "intense reservations" about the Red Berets' requests for going into alliances with different gatherings.

"Collectively, we have some intense hesitations about their pitch, which was sent to us yesterday. And furthermore the previous evening promptly in the evening, we got an electronic form of their proposed administration conveyance agreement with us," he said.

Moodey said they would go through the EFF's record with extreme attention to detail to comprehend their requests prior to proceeding with talks.

Last week, the EFF delivered their conditions for going into alliances with different gatherings, which included land confiscation without remuneration, the foundation of a state bank, and the expulsion of Die Stem from the public song of devotion, among different requests.

Moodey likewise uncovered that they held various telephonic discussions with various gatherings that incorporated the African Christian Democratic Party (ACDP), the African Independent Congress (AIC), the Congress of the People (Cope), the Inkatha Freedom Party (IFP), and the GOOD party.

"Today [Tuesday], we will have an eye-to-eye meeting with the IFP just as Cope," he said.

91% of respondents need ActionSA in govt

Prior to setting out on alliances conversations, ActionSA last week dispatched a public interest stage to get citizens' perspectives on which parties ActionSA ought to go into alliances with.

The party's public administrator Michael Beaumont said they had drawn in with every single South African, and in addition to their allies, on their alliance processes in Tshwane, Johannesburg, and Ekurhuleni in Gauteng, just as eThekwini in KwaZulu-Natal.

Beaumont said residents reacted well to being locked along these lines and needed their perspectives on alliances to be thought of.

Beaumont said 91% of respondents needed to consider ActionSA to be important for the government in hung metropolitan chambers. He said the vast majority of their respondents didn't host solid perspectives regarding which gatherings ActionSA should work with.

"While South Africans might want us to unseat the ANC and convey administrations, they don't maintain exceptionally solid viewpoints about ideological groups we should work with… the real truth is that by far most of the journalists don't care for the ideological groups that are on a deal to ActionSA," he said.