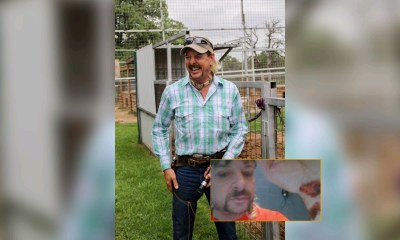 Joe Exotic, who was convicted guilty of murder-for-hire and animal mistreatment and is currently serving a 22-year term, is still in prison.

He gained to prominence in 2020 as a result of the Netflix documentary Tiger King, which was released amid the first worldwide lockdowns. The former zookeeper has feared for his life while serving time in prison due to COVID fears in the institution where he is held, as well as dealing with his own health issues.

According to a source, Exotic is "doing well" as he awaits test results following "various surgeries" he underwent in the last few weeks. This comes after the Tiger King star revealed that he had been attempting to undergo treatment for months.Late last month, Allen Glover, the alleged hitman in the murder-for-hire case against Joe, revealed during a statement to John M. Phillips law firm that he committed perjury during the MFH trial.

unCrazed announced the release date of the second season of Tiger King days before Netflix made the official announcement with viewers only needing to countdown over a month before the drop on November 17, 2021.UnCrazed released an exclusive interview with Joe in September, which is only available on our brand new iOS and Android app, as well as our new digital magazine. Joe's condition and the status of his awaiting sentence review are being closely monitored.