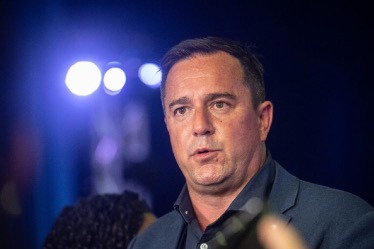 Democratic Alliance (DA) pioneer John Steenhuisen has hammered President Cyril Ramaphosa for proposing that there may be political race reruns in hung regions if alliance talks between parties come up short.

Steenhuisen, talking at a media instructions on Tuesday, blamed Ramaphosa for misdirecting South Africans on how political race reruns work.

He said in hung city chambers where gatherings couldn't see as one another, minority legislatures would probably be established, rather than by-decisions being held.

DA Leader And IEC Breaks Silence On ‘Main Cause’ Of ANC’s Poor Results || It This The End.

"The thought set forward by the president that in case alliances are not set up, the enactment would kick in and we would have reruns, is deluding in light of the fact that as we would like to think and positively the guidance we've taken, the soonest that this might actually happen is just mid-way during the following year.

"Peope should not be taken by the contention that since parties can't observe each to be other that there will be a programmed rerun," Steenhuisen said.

The DA chief said minority legislatures were precarious and not ideal as the gatherings that would frame states in districts with under half of votes, would need to explore a few obstacles like movements of no certainty and the death of financial plans in board.

Steenhuisen approached the ANC to rather acknowledge the consequences of the nearby government decisions.

"We should acknowledge that the political decision results are a reasonable and exact impression of the desire of individuals.

"Also, in light of the fact that you don't care for the outcome shouldn't imply that you say 'how about we simply go for a rerun'. We must acknowledge the majority rule result of a political decision and we must give a valiant effort inside the administrative structure to make it work," he said.

Talking last week at an ANC post-political decision occasion in Soweto, Ramaphosa said the chance of political decision reruns existed in the country's 66 hung gatherings if alliance arrangements were ineffective.

He said the ANC was not frantic to go into alliances with different gatherings, despite the fact that its discretionary help dunked underneath half broadly in the surveys.

"Clearly, there is a time span for these alliances to occur and if those dealings fall flat, the enactment kicks in. And afterward there may must be another political decision," Ramaphosa said.

'It's not so natural as the president might want'

He said Ramaphosa was misjudging the Municipal Structures Act that administers districts.

"Imploding regions doesn't fill that need. Furthermore, honestly, it's not so natural as the president might want South Africans to accept…

"In the event that one peruses plan 3 of the Municipal Structures Act with segment 30, it's unmistakable when alliances can't be framed that the actual enactment imagines a minority government and a board must be compelled to rerun quickly if most of councilors don't go to the primary gathering meeting," he said.

Steenhuisen clarified the ramifications of what might occur if a minority government runs a hung region.

"Assuming a greater part, go to that elective [council] meeting, it will definitely bring about the appointment of city hall leaders and speakers as far as timetable 3. This implies it will be a steady government.

"The principal commitment that the committee might neglect to agree with is the financial plan, which is just due in July one year from now. In this way, the huge danger for those minority legislatures will clearly be movements of no certainty by different gatherings who are attempting to disturb the program. Be that as it may, regardless of whether this occurs, it can't in itself, validate a choice by a MEC to break down the gathering," he said.