Have you ever experienced a bizarre moment that made you ask yourself, "Is anybody else seeing this?" When you go to the grocery store, you never know what kind of characters you are going to encounter, and we all know some stores have more than others (*cough cough* looking at you.

While most of the time grocery shopping is routine, now and then it becomes a total insane adventure as you come face-to-face with some of society's strangest people. As you scroll through these photos see if you're reminded of any of your strange shopping outings, and be glad you didn't have to deal with any of these weird and hilarious situations!

1. This Man Is Here To Spread An Important Message 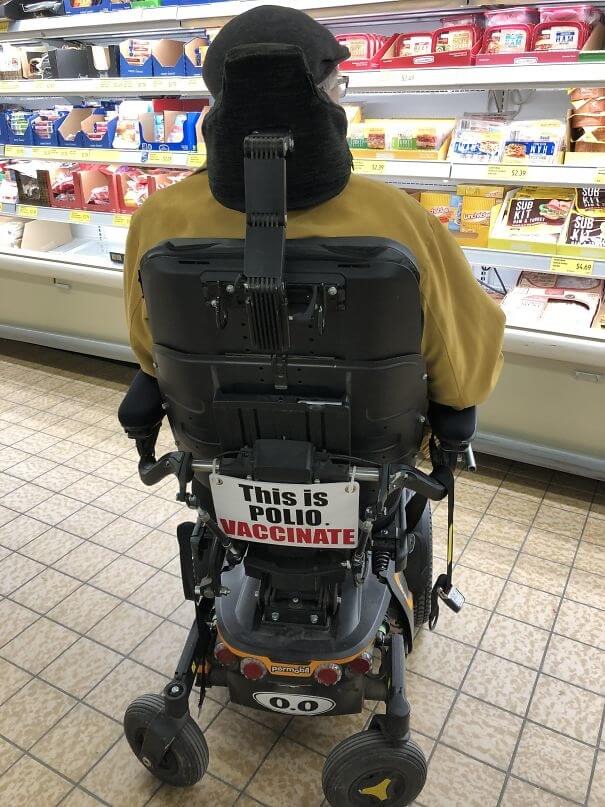 We don't know if this man is trolling everyone, or if he has polio, but he is spreading an important message. Polio is a disease that paralyzes people, but there is a vaccination for it, so most people don't have to worry. However, some people choose not to vaccinate, which can lead to old diseases coming back.

It would be hilarious if he didn't have the disease, and he was just scaring people into thinking that. The person who posted the photo asked the man if he could take a picture because he couldn't believe what the sticker said. 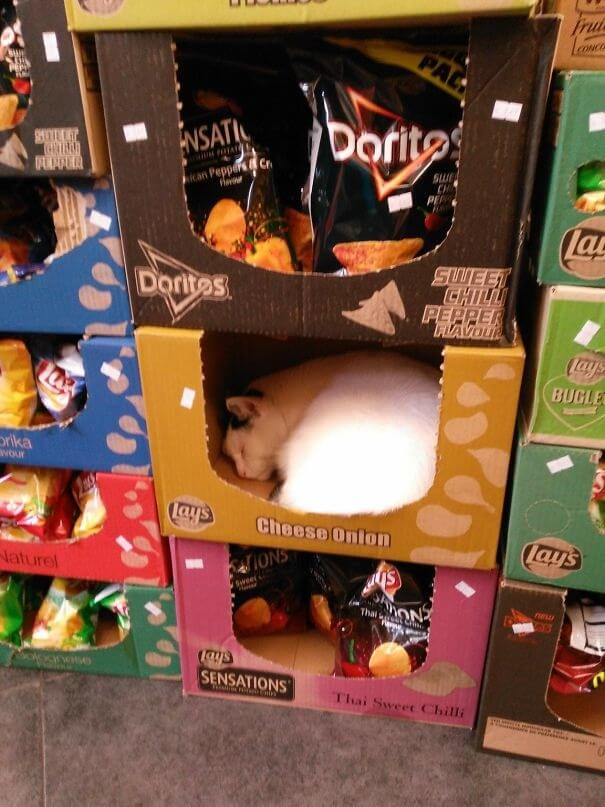 Chip companies are always coming out with unique flavors, but this is by far the most bizarre. Who would want a sour cat and onion-flavored chips? This cat must find the spot warm and comforting, so it goes there when no one is paying attention.

Someone probably tried to buy the cat assuming it was for sale since it was sitting on the shelf. However, they should insist that the price stay the same as the rest of the bags. We hope they gave some love to this cheesy cat who just wanted to nap somewhere warm.

3. German Shepherd Helping Out His Owner "Don't worry, human; I will help you." All it needs is a sundress and a hat, and he will be perfectly disguised just like Scooby-Doo would do. He is a much better shopping companion than most children who are whining about not getting all the chips and candy they want.

He must be good at sniffing out all the best deals. The dog is so proud of himself for being a such good boy, and we wish our dogs were that talented. Grocery shopping would be so much easier if there were someone to help out.

4. Remember The Twins From The Shining? This Is Them Now 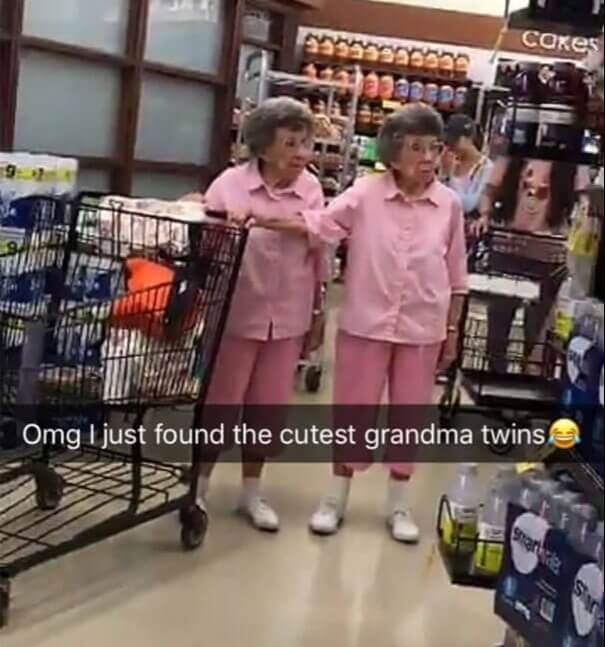 The twins from The Shining are all grown up, and they are still wearing matching outfits. They said, "Come eat with us, Danny. Forever and ever and ever." These women might be grown adults, but they refuse to stop dressing alike. Or maybe there was a twin convention in town.

No matter how old they get, they will always do things together and wear matching outfits because it connects them as twins. We have never seen twins dress alike after elementary school, but it must be important to them to stick together.

5. Praying To The Snack Gods 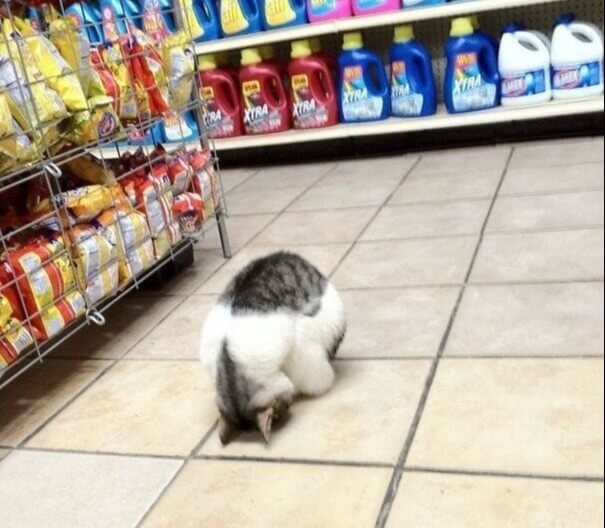 "Oh, mighty snack gods, please let one of these bags be filled with catnip. I would be so grateful. Amen." This little kitten was seen sleeping, or possibly praying, in the corner store, and they couldn't resist taking her picture. He almost made it to the battery section but powered down before he could get there.

He came in to get some extra milk and realized it was time to pray. The shop owner lets him roam freely around the shop because he keeps other pests away. It is a win-win situation for both of them because the cat also gets lots of love from the customers. 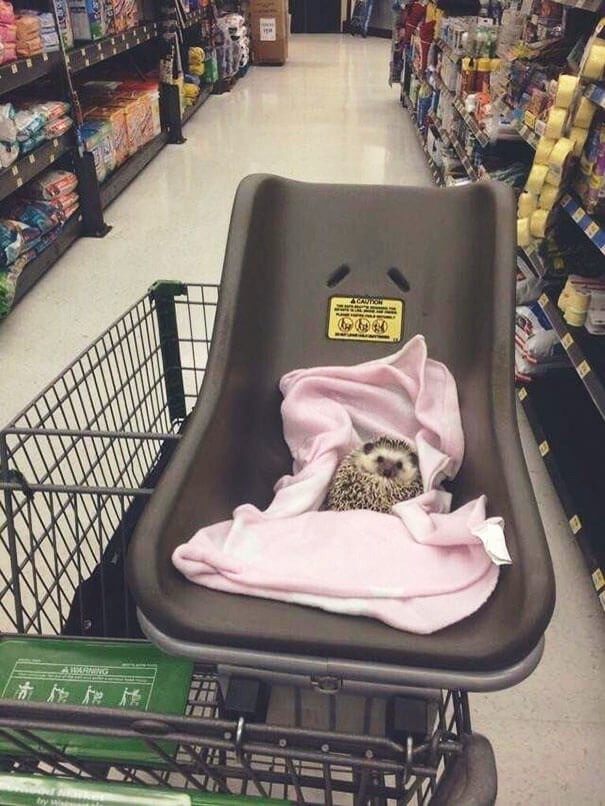 Ma'am - what happened to your baby?! As people passed this cart, they couldn't believe their eyes. This person brought their hedgehog to do some grocery shopping, and it curled up in the blanket as if it were a human infant.

It was probably terrifying because of all the noises and people, so we wouldn't recommend doing this, but it did make for an adorable photo. You don't see many people with these kinds of pets since the more predictable thing is a cat or dog.

7. He Went Bananas To See That Many Bananas 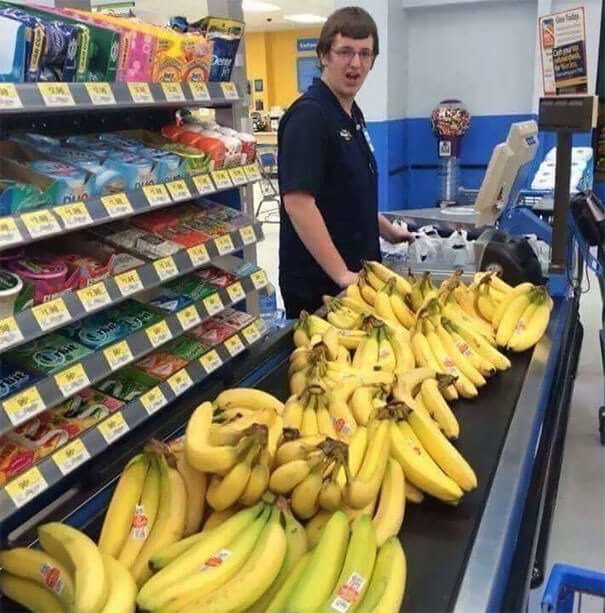 We don't know why someone would need 100 bananas, but the cashier could not have been more confused when the customer unloaded their cart onto the belt. Maybe he has a sanctuary of monkeys or is on a banana-only diet, but honestly, we don't know how someone could use all of these.

It's like one of those people from the math problems we ready in middle school. If Johnny bought 100 bananas and gave Phil 36, how many bananas would he have left? That checkout line has a potassium overload, and the cashier doesn't even know where to begin. 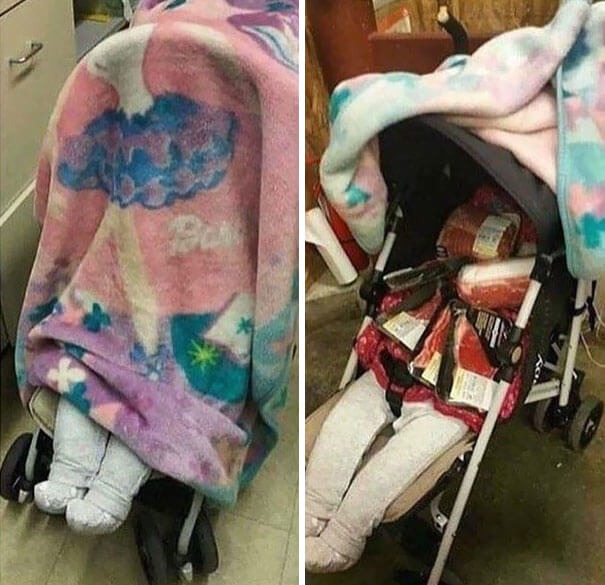 People keep getting more and more creative when it comes to shoplifting. This person went as far as creating fake baby legs to steal the bacon. They were so close to getting away with it until a store employee realized they were putting stuff under the blanket.

We understand that some people can't afford groceries, but there are better ways to get food than stealing. Why do they need that much bacon anyway? Was one pack not enough? Although they were smart, they weren't clever enough to get away with it.

9. Shocked When Someone Licked My Arm In The Walgreens This Morning 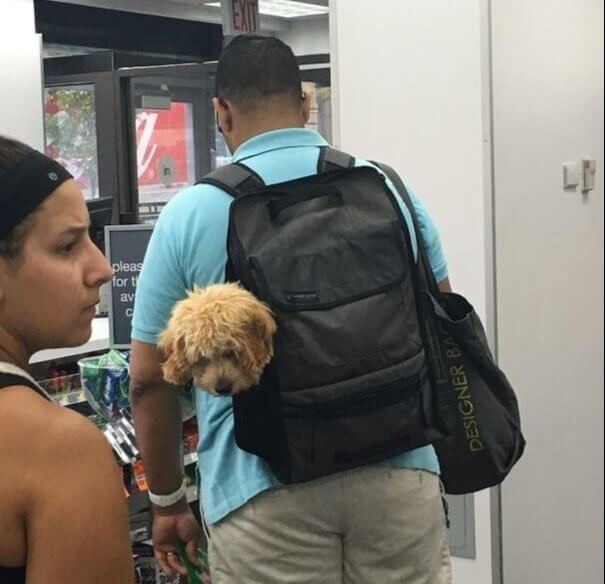 While this person was walking through the aisles of Walgreens - she suddenly wondered who was licking her arm - and then she looked to see this fluffy puppy. If we saw this cutie peeking out of a backpack, we would have trouble resisting petting it.

He probably got to sniff and lick many people from that height instead of walking on the ground. We wish we could carry our dogs in our backpacks and take them with us wherever we go. Isn't that everyone's dream? 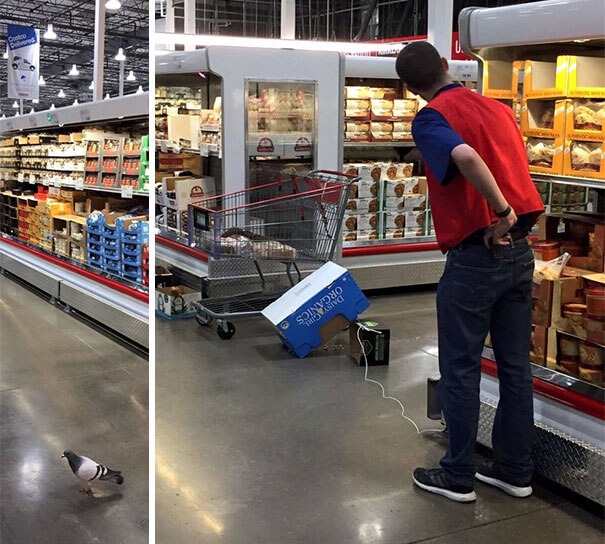 Some superstores are large, and they have very high ceilings, so it is no surprise that a pigeon found its way inside. There is not much the employees can do to stop them from coming in when they want. The employees can only try to get them out of the store by setting up make-shift traps to capture and set them free.

This employee is pulling out all the skills he learned from cartoons as a child to catch this wandering pigeon. People always said Saturday morning cartoons would turn our brains to mush, but they didn't know how useful some of those episodes could be.