By EYRFM-NEWS (self media writer) | 8 days ago 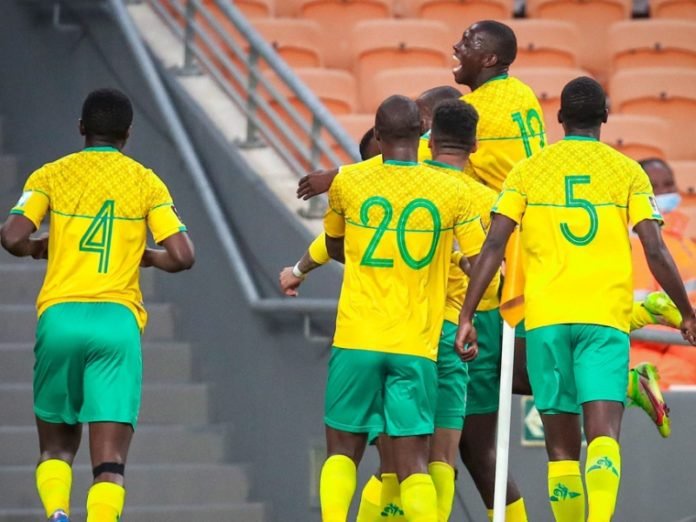 Bafana Bafana fans were treated to a much-needed victory over Ethiopia in a 1-0 win at the FNB Stadium.t

Fans were in attendance for the first time in 19 months as South Africa reclaimed the top spot in Group G.

Bafana’s hunger and desire to defeat Ethiopia for the second time in just a few days was evident from the onset. Hugo Broos’s high press was in full fight, causing the Ethiopian defence trouble in the opening minutes.

South Africa looked particularly strong from set-pieces, and Bafana took the lead through a corner after the Ethiopian goalkeeper found himself in no man’s land. The towering header was too difficult for Getaneh Kebede to deal with, who put the ball in his own net.

Witnessing the roar of the crowd at a South African sporting event was a sight to behold, an historic moment for the nation as fans returned after a lengthy layoff due to the Covid-19 pandemic.

Broos’s men began to fall flat as the half went on and the Ethiopians grew in confidence. On a few occasions, they had Bafana goalkeeper Ronwen Williams looking over his shoulder – but never into the back of his own net.

South Africa might consider themselves lucky to walk away with all three points after they missed two massive chances, but Wueto Abate’s men did not have the firepower to punish the South Africans for their wastefulness.

The Bafana youngsters proved once again they are capable of performing and taking the team to the third round of the African World Cup Qualifiers.

South Africa currently find themselves top of Group G with four matches played, one point ahead of rivals Ghana.

Bafana are yet to taste defeat in the group stages and will face Zimbabwe and finally Ghana in the next international break set for the second week of November.

With just two games to go in round two, the South Africans are beginning to believe their side can reach round three of Qatar 2022 qualifiers that will see the ten group winners go head-to-head.

From the top ten group winners, only five African sides will find themselves playing in the next World Cup and if Bafana are to make it all the way, it would be the first World Cup the side has qualified for since 2002.