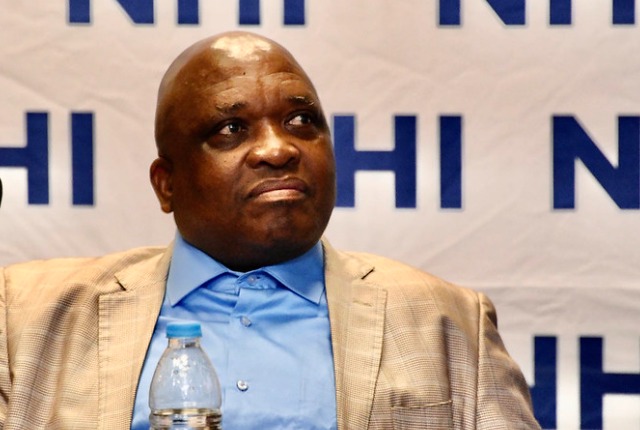 The Commission for Gender Equality (CGE) has warned businesses against instituting mandatory vaccination policies, claiming that they risk infringing on workers' constitutional rights.

The Chapter 9 body expressed concern about a recent study that discovered that some Covid-19 vaccines may cause a minor change in menstrual cycle length – but that this change is only temporary.

While health experts believe that this finding is not clinically significant, the Commission warned businesses and other institutions against requiring employees to vaccinate and imposing harsh penalties if they do not.

The Commission stated that it is aware that several corporations and retailers have made mandatory vaccinations in their workplaces, and that many more may follow suit.

"The Commission is concerned that employees who refuse to vaccinate may have their contracts terminated by employers if vaccination mandates are allowed to continue without regard for workers' human rights," it said.

"The retail sector in the country employs a large number of young females as cashiers and cleaners, and many of them are unable to negotiate with their employers if they do not wish to vaccinate." 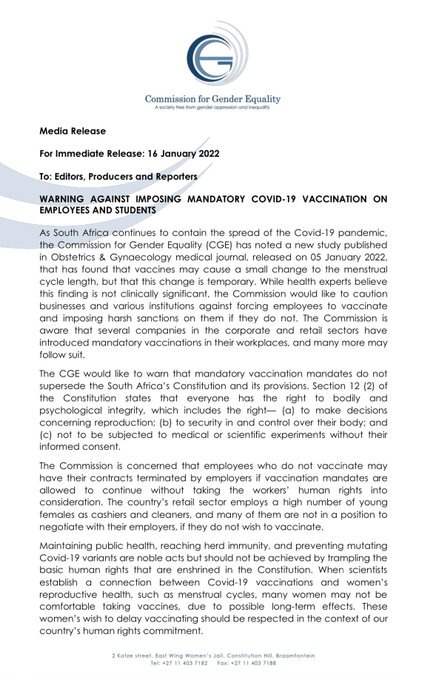 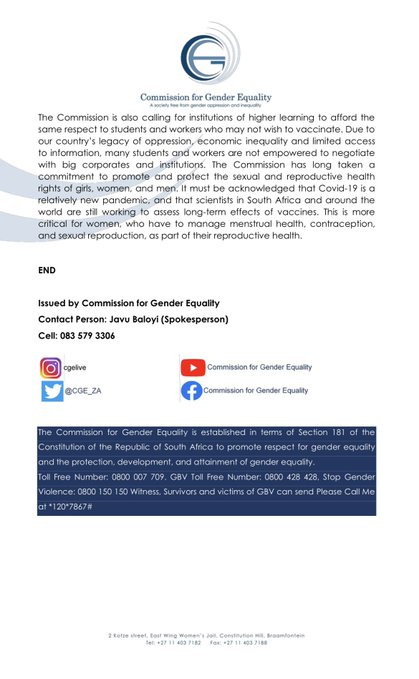 While the Commission supported the goal of achieving herd immunity, it stated that it should not be accomplished by 'violating the fundamental human rights enshrined in the Constitution.'

"If scientists establish a link between Covid-19 vaccinations and women's reproductive health, such as menstrual cycles, many women may be hesitant to take vaccines due to potential long-term consequences." The desire of these women to postpone vaccination should be respected in light of our country's human rights commitments.

The Commission also calls on institutions of higher learning, including universities, to treat students and workers who do not wish to be vaccinated with the same respect.

Many students and workers lack the negotiating power to deal with large corporations and institutions because of our country's history of oppression, economic inequality, and limited access to information. The Commission has long been committed to promoting and protecting girls', women's, and men's sexual and reproductive health rights.

"It must be recognized that Covid-19 is a relatively new pandemic, and that scientists in South Africa and around the world are still working to assess vaccines' long-term effects." This is especially important for women, who must manage menstrual health, contraception, and sexual reproduction as part of their reproductive health."

The decision is expected to be made by the end of January.

According to Health Minister Joe Phaahla, the government has not yet made a formal decision on mandatory vaccinations in South Africa, and discussions are still ongoing.

In a press conference on Friday (15 January), Phaahla stated that he hopes a decision on mandatory vaccination will be made before the end of January because vaccine uptake remains low. He also stated that the government's top priority is to vaccinate all adults, with at least 70% coverage.

South Africa's Constitutional Court is expected to be a key decision-maker in the country's introduction of mandatory Covid-19 vaccines, with several groups announcing plans to approach the country's highest court for clarification.

In the coming weeks, partners at the National Economic Development and Labour Council (Nedlac) are expected to approach South Africa's highest court for clarification on vaccine mandates.

In his address to a Nedlac meeting on December 7, Labour Minister Thulas Nxesi stated that the group plans to approach the Constitutional Court in 2022 for a legal declaration on vaccine mandates.

Nedlac has suggested that mandatory vaccinations be implemented in workplaces, with specific venues only accessible to those who have been vaccinated. Mandates are expected to be implemented in gatherings, events, and the hospitality sector.