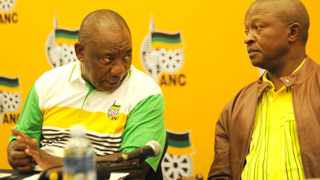 PRESIDENT Cyril Ramaphosa is being faulted for the supposed "prisoner" circumstance that unfurled at the St George's Hotel in Irene during the week.

As per sources, Ramaphosa has been playing find the stowaway with veterans who have been requiring a gathering with him. An unknown source said Ramaphosa has been relinquishing his obligations since he has no solutions to their requests.

"From whenever they first mentioned a gathering with him prior in the year, he selected Deputy President David Mabuza as opposed to meeting with them straightforwardly. DD (Mabuza) met with them after they had involved Luthuli House, and guarantees were made," said the source.

Yet, nothing appeared from those guarantees. A second control of Luthuli House was masterminded, and it was after that gathering that the official assignment group was set up, and the earlier week's gathering was set up.

Mabuza was set to address the complaints of the veterans yet, as per sources, he turned around when he understood that Ramaphosa was not going to join in.

"DD understood that he was being placed in the terminating line, and the individual the vets need to determine their concerns is number one. He turned around and the clergymen were left alone. The vets were not content with that and said they would not like to be tended to by the clergyman as they would not have the option to determine their issues," the source said.

The source added that it was anything but a prisoner circumstance as there was no danger to life or weapons used to compromise the pastors.

"The clergymen were told to call their seniors to come and address the individuals' requests. Nobody was undermined or their lives at serious risk," said the source.

Priest in the Presidency Mondli Gungubele, Defense Minister Thandi Modise and her representative, Thabang Makwetla, said they were held without wanting to at the lodging. Police utilized shock explosives to stop the circumstance, and something like 56 individuals were captured.

"We had a gathering at the occurrence of military veterans, who we met the previous evening (Thursday), and we expected that they would be keen on the official assignment collaboration progress, as we had those arrangements.