According to the most recent information made public by Kyiv, RUSSIA'S military has suffered losses of 35,000 personnel, 1,500 tanks, and 217 planes as a result of its involvement in the conflict in Ukraine.

The information was provided by Ukraine's Centre for Strategic Communications and Information Security, which reports to the Ministry of Culture and Information Policy of that nation. These data constitute the sole assessment that is currently available on the status of Moscow's army. However, information on casualties and equipment losses cannot be confirmed, and due to the specific interests of nations, such information can not be believed completely.

This week marks the beginning of the fourth month of the conflict that has been going on in Ukraine. The Ukrainian government provides frequent reports on Russia's casualties in the conflict. 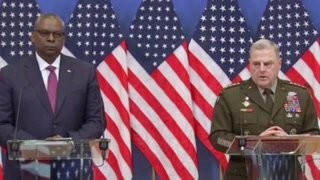 Other pieces of equipment belonging to the Kremlin that have been destroyed include 3,645 armoured protected vehicles (APV), 75 artillery systems, 241 multiple launch rocket systems (MLRS), and 2,560 vehicles, as stated in the most recent information that was provided on Friday.

There have only been two occasions on which Russia has provided an official count of the number of soldiers that have been killed in action. The most recent of these was on March 25, when the number 1,351 was provided. 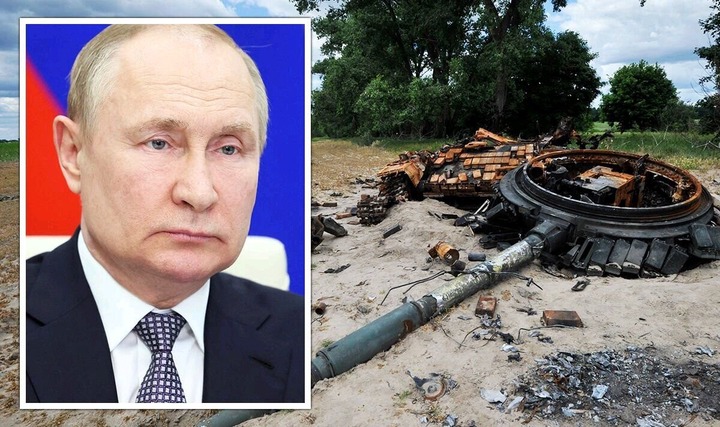 According to recent estimates, Vladimir Putin has lost 35,000 men, 1,500 tanks, and 217 planes in his campaign against Ukraine (Image: GETTY)

Kyiv does not disclose any such figures about its own soldiers or equipment.

However, earlier this month, President Volodymyr Zelensky reported that his army was suffering losses of up to one hundred troops every day, with an additional five hundred being injured.

During an interview with the television station Newsmax in the United States, Mr. Zelenskiy stated, "The situation is quite difficult: we are losing between 60 and 100 troops each day as a result of being killed in battle and something around 500 individuals as a result of being injured in action." Therefore, we are maintaining the perimeters of our defensive positions.

In addition to referring to Ukraine and its people as the "defensive perimeter" for the globe against the aggression of Vladimir Putin, he stated that "We have to realize who is the dark force - it is Russia."

"And Russia is not going to back down in Ukraine, that much is certain.

"The other countries, the former Republics of the USSR and the members of the European Union – some of them are now NATO member nations — they are already under attack."

Even after more than three weeks have passed, this region remains the primary center of attention for Russia.

According to the mayor of Severodonetsk, Russian military completely conquered the strategically significant city on Saturday. 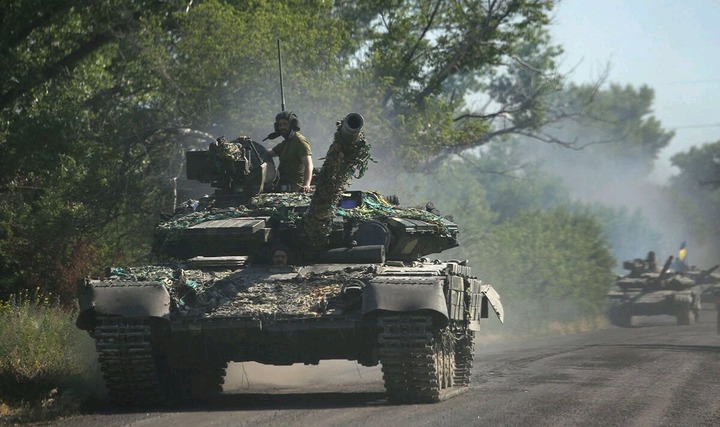 On a route in the Donbas area of eastern Ukraine, Ukrainian military personnel are seen moving beside tanks (Image: GETTY)

The collapse of the city, which used to be home to more than 100,000 people but has now been reduced to a wasteland of ruins by Russian artillery, is the Kremlin's largest victory since conquering the port of Mariupol a month ago.

It was the most recent sign of Ukrainian resistance in Donbas, but now, according to Mayor Oleksandr Stryuk, anybody left behind cannot enter Ukrainian-held territory anymore because the region has been entirely blocked off.

As a result of this success, Russian and local rebel forces now control 95% of the Luhansk region.

Around one half of Donetsk is also under the grip of Russian and rebel forces.

According to the chief of Defense Intelligence for the Ukrainian Ministry of Defense, Kyrylo Budanov, the loss of Severodonetsk was a way for Kiev's forces to regroup on higher ground in the neighboring city of Lysychansk.

He stated that the actions that were taking place in the region of Severodonetsk were a strategic regrouping of our soldiers.

"We are repositioning ourselves in a more beneficial fashion in order to get a tactical edge."

Chiefs Have Just Terminated A Player's Contract At The Club :See Who

Mshengu Reveals He Is Proud of The Stability Brought In The Department of Education.