The first female pilot in Africa 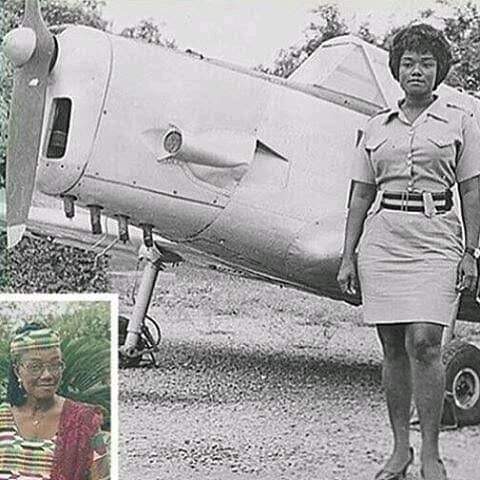 Melody Danquah was born in Larteh Akuapem, on 6 January 1937 to Ibinijah Rexford Addo-Danquah, who was the illustrious Court Registrar and Arbitrator of Larteh. Her mother was Selina Gyamfi. Melody was the sixth of 10 siblings.

Danquah was educated at the Methodist Primary and Middle schools in Larteh and Wesley Girls High School in Cape Coast. She was also a product of the Government Secretarial School.

She was chosen among the first three women towards the end of 1963 to be trained into the Ghana Air Force as pilots. She successfully made the grade and the subsequent basic military training at the Ghana Military Academy. On 22 June 1964, Flt. Cadet Danquah flew solo for the first time in a de Havilland Canada DHC-1 Chipmunk aircraft, becoming the first Ghanaian to fly an aeroplane solo. She received her Wings qualifying her as a pilot from Kofi Baako who was the Minister of Defence on 15 April 1965. She ended her flying career in June 1968 and began to do administrative work in the Force. In 1984, she was discharged due to the state of her health. She received a Long Service award and The Efficiency Medal.

After she retired from the military, she worked for the World Food Programme for a brief period and then the National Service Secretariat. At the age of 60, she earned a Diploma in Bible Studies and Theology and began to preach to military audiences. She later joined the Board of Directors for the Ghana Institute of Management and Public Administration.

She was mentioned by Mrs. Rebeca Akufo-Addo, the first lady of Ghana during the 2017 International Women's Day celebrations for being an inspiration to women. She was honored with The Companion of the Order of the Volta in 2006, by President John Kufuor for being a courageous pacesetter.

Why is Zim Government not Helping to Stop Smuggling of Cars and Illicit Cigarette from their Side.

Quickly see how to remove Isichitho that is sent you.

Opinion: Kaizer Chiefs won but they would not have won if they listened to the Stuart Baxter