According to the Ministry of Defense's daily report from the conflict in Ukraine, the capture of Lysychansk by the Kremlin will pave the way for Russia to launch the second stage of its attack on Donetsk. This is the next step in Russia's plan to "liberate" the Donbas region from the control of the Ukrainian government.

Yesterday in Lysychansk, which is located in Luhansk, Ukraine, a guy walks by a wrecked vehicle. 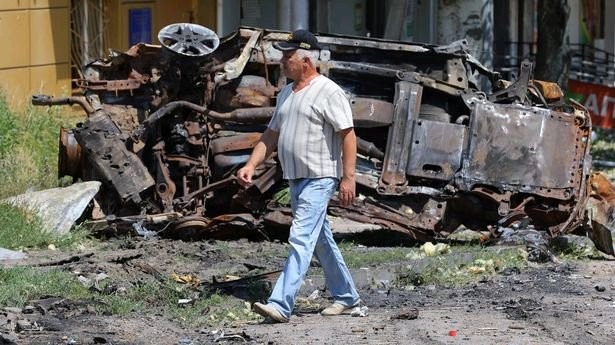 The Russian military will "continue to demolish towns and cities," according to the Ministry of Defense in the United Kingdom, which issued this warning as Vladimir Putin's war juggernaut rolls across eastern Ukraine.

The Ministry of Defense forecasts that Russia's armed forces will be able to launch an attack on the neighboring city of Donetsk after the Kremlin took control of the strategically important city of Lysychansk in the Donbas area.

According to a statement released by the Ministry of Defense today, "The struggle for the Donbas has been characterized by slow rates of advance and Russia's massed deployment of artillery, which has resulted in the leveling of towns and cities."

It is quite clear that the battle in Donetsk Oblast will go in the same fashion going forward.

The conquest of Lysychansk has given Vladimir Putin the opportunity to brag in front of his home audience that he is moving increasingly closer to "liberating the Donbas," which was the initial aim that he set out for the conflict.

Throughout the entirety of the war, the despot has maintained that pro-Russians in eastern Ukraine are being victimized and persecuted in a systematic manner.

After the win, Vladimir Putin has instructed his troops to recuperate and take some time off. 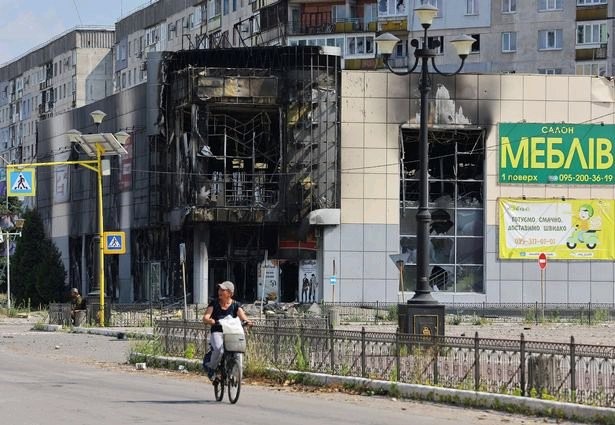 The triumph was attributed to the coordination between two Russian military groups, according to the heads of the Russian defense forces.

The Ministry of Defense stated, in reference to the performance of Ukraine, that the forces had "likely entirely departed in good order," and added that this was in accordance with "existing [military] preparations."

The city was taken on Sunday, finishing off the victory of the industrialized eastern area of Luhansk, which was one of two districts in Donbas that have been the location of the largest fight in Europe in recent decades.

The battle for Luhansk has resulted in significant deaths on both sides, notably during the besieging of the twin cities of Lysychansk and Sievierodonetsk. Both of these cities are located in the same region. The constant bombing from the Russian military has reduced both of these cities to ruins.

Nina, a young mother who has evacuated Lysychansk in order to seek sanctuary in the city of Dnipro in the center of the country, stated that "the city doesn't exist anymore."

According to the Ministry of Defense, the Russian victories were the result of improved coordination between two generals. 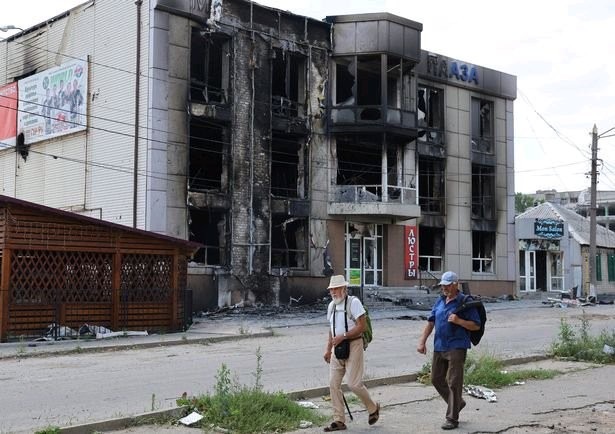 "It has been almost completely eradicated off the face of the Earth. Because it was attacked, the distribution center for humanitarian assistance has been destroyed. The structure that was formerly home to the center no longer stands. It has been demolished. The same as many of our other residences."

On Tuesday, Ukrainian forces established new defensive lines in Donetsk, where they continue to maintain control of major cities. At the same time, Russian President Vladimir Putin ordered his troops to "absolutely rest and recover their military preparedness." Meanwhile, units in other regions continue to engage in combat.

Pavlo Kyrylenko, the governor of Donetsk, said that overnight, Russian military forces fired artillery into the cities of Sloviansk and Kramatorsk.

He remarked this in reference to the towns and added that "they are now also the main line of assault for the enemy." There is nowhere in the Donetsk area that is safe because to the bombardment.

On July 5, 2022, Vladimir Putin had a meeting in Moscow with Artyom Zdunov, the president of the Republic of Mordovia. 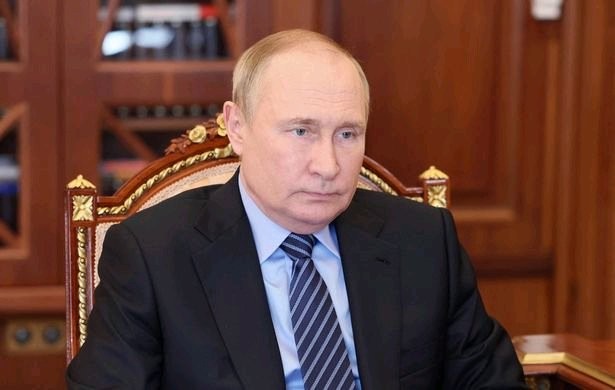 Since the beginning of the conflict, Russia has demanded that Ukraine hand over the cities of Luhansk and Donetsk to separatists who are loyal to Russia and have declared themselves to be independent statelets.

Oleksiy Arestovych, an adviser to President Volodymyr Zelenskiy, was quoted in a video that was shared online as saying, "This is the last victory for Russia on Ukrainian territory."

These were considered to be cities of a moderate size. And this process lasted for a total of ninety days, from April 4th until July 4th. So many casualties"

Arestovych stated that in addition to the fight for Donetsk, the Ukrainian government was planning to initiate counteroffensives in the southern region of the country.

A view of Mariupol, which is currently controlled by the Russians 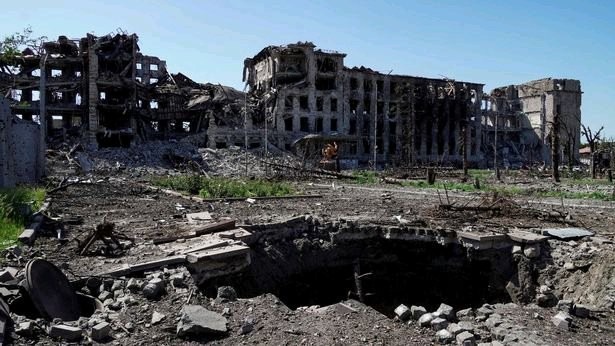 It is no longer possible to bring additional forces from Russia into the conflict. They made a significant sacrifice in order to gain control of Sievierodonetsk and Lysychansk.

Some military analysts believed that the hard-won victory had brought the Russian forces very little in the way of strategic gain, and that the outcome of the conflict that has been dubbed the "battle of the Donbas" was still uncertain.

Neil Melvin, a researcher at the RUSI think tank in London, expressed his opinion that "I think it's a tactical victory for Russia but at an enormous cost." He compared the conflict to the massive battles that were fought during World War One for a relatively small amount of territory gain.

He said, "This has been going on for sixty days, and we have made very slow progress." It's possible that the Russians will declare some sort of victory, but the decisive battle in this war is still to come.

According to Melvin, the decisive battle for Ukraine will most likely take place not in the east, where Russia is mounting its main assault, but in the south, where Ukraine has begun a counter-offensive to recapture territory. Russia's main assault is currently taking place in the east.

A residential building in Kyiv that was damaged by Russian artillery fire. 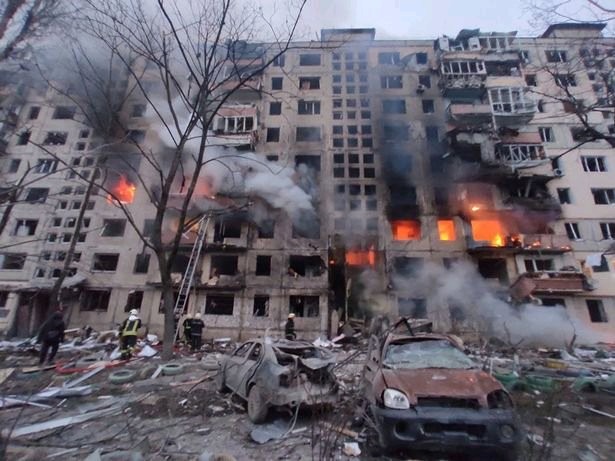 According to Oleksandr Senkevych, the mayor of Mykolaiv, rockets fired from Russia struck the city early on Tuesday morning. Mykolaiv is located in the south of Ukraine on the main highway that connects Kherson and Odesa.

Zelenskiy stated on Monday that Ukrainian troops were still engaged in combat despite the fact that they had withdrawn from Lysychansk.

In a video message that was sent out each evening, Zelenskiy would say that the armed forces of Ukraine would "respond, push back, and destroy the offensive potential of the occupiers day after day."

"We are going to have to defeat them. It is not an easy undertaking. It takes an extraordinary amount of time and labor. But we have no alternative."