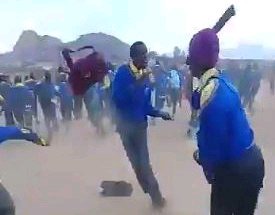 Democracy has indeed destroyed our country. It has come to the point of children not listening to their parents. These has resulted into disentegration of morals in our society. Since children having rights everything has gone to dust in disciplining our children. As a parent if you stood up and try to use force on your child this is viewed as abuse and this has resulted into kids controlling their lives the way they want.

Something terrible has broken out in KZN in the Umzinto area, at Gobume High School where school boys went into rampage of finishing each other off. The terrible situation happened when groups of boys were playing game of cards. The other boy from Mbabaleni who had lost his R50 from the game asked the boy from KwaJeza. The boy was standing and watching the game, when was asked to lend his R50. For the money he lend he had to withheld his shoe in case the guy lost. Unfortunately he lost again the R50. The boy who borrowed him the money told him he can't give him his shoe without the R50 returned.

This resulted in a terrible war as the boy told his home boys about the boy who withheld his shoe for the R50. In hearing this, the Mbambaleni boys armed themselves with machetes and hammers to teach KwaJeza boy a lesson. That resulted in KwaJeza boys defending the handler of the shoes and arming themselves too which resulted into chaos and screams as children cut each and shoot each other. The other girl was shot and sent to hospital. The other boy was cut on the mouth by a machete and taken to hospital.

But this ongoing horrible fightings are also happening in countries like UK where wars becomes so deadly to the point of some students loosing their lives. Researchers say the most common causes of fights were disputes over some aspect of a rule‐governed game, teasing, retaliations to accidental hurt/injury, and to a lesser extent disputes over space. 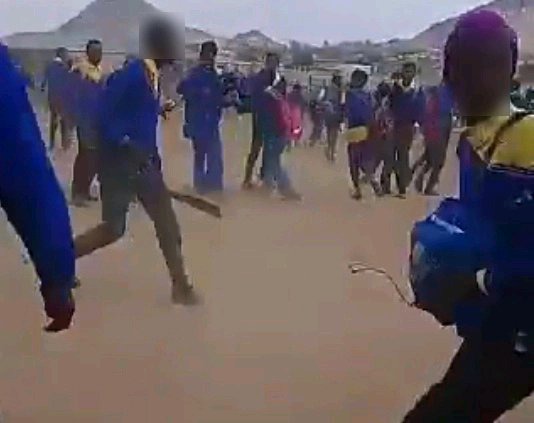 Many children expressed generally negative attitudes towards fighting, and there appeared to be several common ‘barriers’ that deterred children from participating. On the other hand, some children also articulated reasons why they sometimes felt it was necessary to fight.

﻿Bullying is another thing that made students in the UK to fight. A story that hit London 2 years back was of boy who got stabbed for joking to the other boy in the school bus. After the bus stopped the boy who was not happy to be teased chased a 14 year Raymond Donaldson and stabbed him with a gruesome knife until he died. Indeed our government must step in before its too late like societies in UK.

Efforts to get the Department of Education to comment were unsuccessful until it was time to publish. According to one source, the argument was removed by a paper game.﻿