Destroyers with Hypersonic Missiles? The High Seas Are Being Rocked by This Navy Plan

By Chinese (self media writer) | 2 months ago

This new capability will allow the Navy to destroy enemy ships at five times the speed of sound, arrive at high-value land targets in minutes from huge distances, and even intercept incoming anti-ship missiles with pinpoint accuracy. 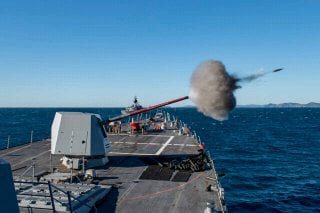 The United States Navy's plans to equip its destroyer fleet with game-changing, ship-launched hypersonic missiles are causing a stir on the high seas. This new capacity, according to Navy officers, will give them the power to kill enemy ships at five times the speed of sound, fall on high-value land targets in minutes from large distances, and even intercept incoming anti-ship missiles with high precision.

"The Navy has been investing on defensive systems for far too long. At a hearing on the 2023 budget, Chief of Naval Operations Adm. Michael Gilday told members of the Senate Appropriations Subcommittee on Defense, "We made the shift to offensive systems, and the Navy is leading the way." In response to Senator Richard Shelby's (R-AL) questions regarding the program, Gilday explained how the Army and Navy were working together on a Common Hypersonic Glide Body (CHGB) to enable their hypersonic weapons systems. The Army expects to deploy its ground-mobile Long-Range Hypersonic Weapon by 2023, and the Navy expects to deploy its Conventional Prompt Strike destroyers by 2025.

The glide body is a hypersonic weapon that is launched into the atmosphere at speeds of five or more times the speed of sound. Once in the air, the weapon can skip over the upper reaches of the atmosphere before relying on the weapon's descending speed to hit a target. The sheer force and speed of impact can be used to completely destroy a target.

"Our all-up round (CHGB) is a 34-inch booster that the Army and Navy will use interchangeably. At the Space and Missile Defense Symposium in Huntsville, AL, on Aug. 11, Robert Strider, deputy of the Army Hypersonic Project Office, told an audience that "we will shoot exactly the same stuff the Navy shoots out of a sub or ship."

Gilday said the Navy's hypersonics program had met every benchmark milestone, citing the technology's promise and the program's quick advancement. He attributed this in part to the Navy's decision to increase its hypersonics budget from $700 million to $1.4 billion.

The importance of attack for Gilday is noteworthy. Indeed, it echoes current thinking about how offensive and defensive activities are inextricably linked when it comes to missile attacks and missile defense. Certainly, ensuring catastrophic, quick hypersonic retribution is one evident method to improve defence against hypersonic weapons. Hypersonic weapons may be able to serve as a traditional form of strategic deterrence in this regard, by notifying potential adversaries that an attack with hypersonic weapons will be answered by a large offensive strike in kind. Hypersonic projectiles, which are agile and difficult to track, might also be used as interceptors against approaching hypersonic missiles, as they could travel at the speeds required to make an intercept.

Kris Osborn is the National Interest's defense editor. Osborn previously worked for the Pentagon's Office of the Assistant Secretary of the Army—Acquisition, Logistics, and Technology as a Highly Qualified Expert. Osborn has also worked on national television networks as an anchor and on-air military expert. He has been on Fox News, MSNBC, The Military Channel, and The History Channel as a guest military analyst. He also holds a Columbia University Master's Degree in Comparative Literature.

Content created and supplied by: Chinese (via Opera News )