'This Young Girl Impregnated By Runaway Soldier, Wants Military To Fish Him Out.

'This young girl who has been impregnated by a fugitive soldier wants the military to get him. 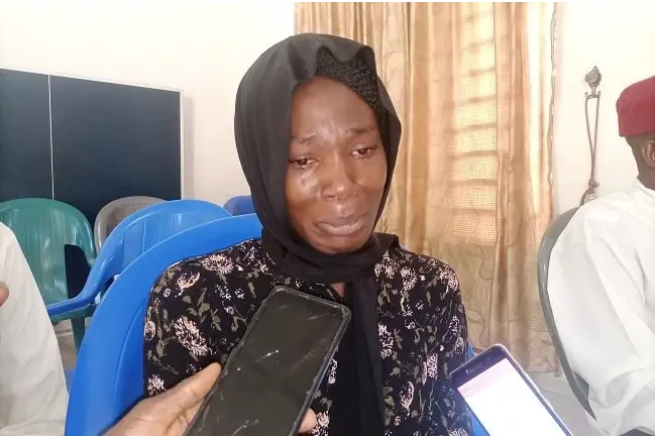 In the case of Comfort Peter, a 23-year-old resident of Bauchi but originally from Bogoro Local Government Area of the state, it appears to be a case of love, deceit, and betrayal by someone she trusted and entrusted her love life to, as she is now seeking the assistance of the military to apprehend a serving soldier, one Sergeant Julius Simon, who she claims impregnated and abandoned her.

During a press conference held at the National Union of Journalists Press Centre on Thursday, Comfort explained that she and her boyfriend first encountered each other in April 2018 when she had just graduated from Government Day Secretary School at Federal Low Cost in Bauchi. "He was on a special assignment at the Defence Industry Corporation (DIC) plant in Bauchi, where I was working as a food vendor, and he approached me and told me that he was madly in love with me."

"I told my madam about it, but she cautioned me against doing so," she said later. The fact that Julius was troubling me was brought to my attention by my madam, who advised me to inform him that if he truly loved me, to come to my house and meet my parents. I informed him of what my madam had told me, and he agreed to visit us at our home."

"He actually came to our house, met my father, and stated his intention to marry me," she recounted, tears streaming down her cheeks. "I was completely shocked." My father asked him several questions, which he answered, and my father grudgingly consented, telling him to bring his entourage to meet my father and his family."

Comfort continued, "One evening in August 2018, he called to inform me that they would be departing Bauchi and returning to Biu after completing the task. When I arrived at Shadawanka Barracks, he invited me to meet with him so that we could discuss the situation before he left the following day.

"He guided me to the Barracks, where he picked me up and drove me to the home of one of his buddies, where he slept with me the entire night. He was the one who 'disvirgined' me, and he was so overjoyed that he met me when I was still a virgin, saying that he would marry me without hesitation. "I was completely unaware that he was feigning affection for me."

According to her, she has made numerous attempts to contact him but has been unsuccessful because he has ceased using the phone number he provided her.

Informing him that I was pregnant prompted him to promise to come, but I did not see him till later. When I went to see him in Biu, he regretted profusely for not showing up as promised since he claimed to have been occupied in the bush.

In addition, when the pregnancy was seven months old, I traveled back to Biu with my uncle. He also expressed regret to my uncle and vowed to return with his family to complete the formalization of the marriage. We returned to Bauchi, but he did not show up as promised, so we left.

I told him I had given birth to a child in June 2019, and he agreed, but he has refused to visit the boy, who is now two years and three months old," Comfort sobbed.

"It was Julius who 'disvirgined' me in the first place. He had pledged to marry me, but he had lied to me. Although I have no desire to love or trust any guy again, he must look after his son."

Comfort, who had traveled with her father, a retired Assistant Superintendent of Police, pleaded with the military authorities to apprehend him and hold him accountable for his son's well-being and safety.

As a result of her attempts to elicit a response from the military authorities in Bauchi, an officer who spoke to our correspondent on condition of anonymity told her to return to the unit where the soldier is serving in order to file an official complaint.

Big News: Bandits Attack A Girl's School, All Students Forced To Lie On the Ground - Video

In Shock - Five Men From Berea Have Been Arrested For This