The only movements that are purely for the South Africans are Operation Dudula and PutSouthAfricaFirst. They want to ensure that South Africans are put first in their country which is something that should have been happening without having to force it. But it is not the case because the South African government does not want to be seen as xenophobic by the world and they are doing this at the expense of the people of this country.

We have seen that these movements have been at the forefront of raising awareness when it comes to the issue of the illegal foreigners who are roaming the streets freely in this country, and doing as they please. They are even the most illegal foreigners in the country committing crimes. But when South Africans try to talk about this, they are leveled as being xenophobic.

But now members of Operation Dudula have given a memorandum to SANDF outside their offices, and they are demanding that the Army should assist the police in combating the crime in this country, and we know that illegal foreigners are mostly who are involved in crime. 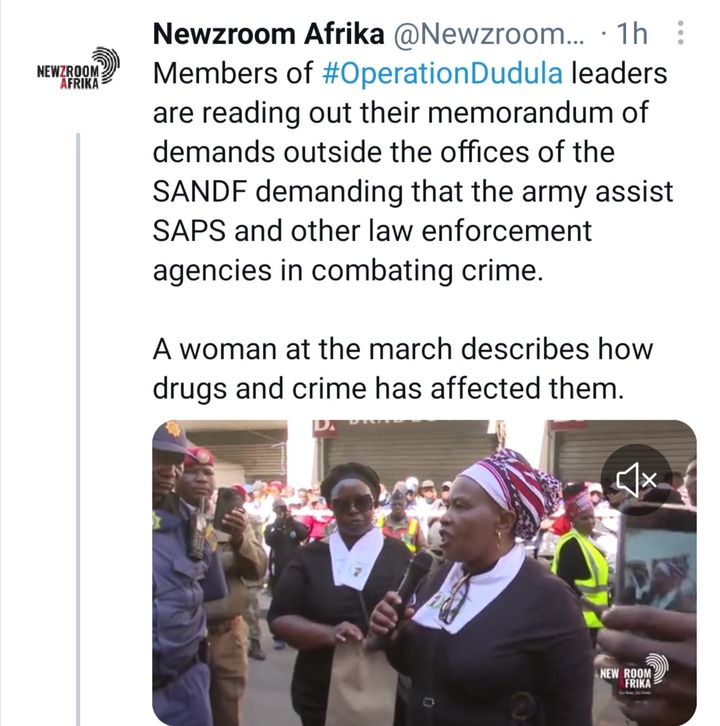 This comes after many failed attempts to try and get the army to be deployed in the country so that they can solve these issues affecting South Africans. The SANDF has been given 7 days to respond to the list of demands. We know that it has been alleged that the Army is facing a financial crisis which is why they want to lay off about 3000 SANDF members. This country is a joke because when the people are calling for the army, they say that they are being retrenched so that they can say that there aren't enough of them who can be deployed. Ramaphosa has messed up this country. Under his leadership, the army was deployed to take food away from the people and even to guard them if they were wearing masks. But now when the people are dying and calling for the army, they have a money crisis.