Another blow has been delivered to VLADIMIR PUTIN as a result of the derailment of a Russian train in the Pskov area that was transporting munitions.

The revelation comes at a time when reports indicate that Russian forces are running low on manpower as well as military equipment, with ammunition becoming a significant problem in frontline lines. In contrast to Moscow's heavy reliance on aircraft assaults on Ukraine, Russian ground forces have made relatively little headway in the most recent stage of the conflict, which has been centered in the eastern part of the country. 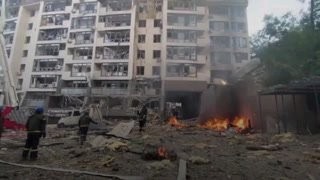 The derailment occurred close to the city of Pskov, which is located in western Russia and is not far from the borders of Estonia and Latvia.

It has been sealed off at this point by Russian security personnel from the FSB as well as by officials from the local government.

According to Ukraine Today, a local media outfit, the wagons included significant quantities of ammo. Ukraine Today shared this information on its Telegram channel when it broke the story.

The railroad workers must wait until the extremely volatile cargo has been unloaded and transported to a more secure location before they are permitted to remove the debris.

The bulk of the wagons, as seen in photographs taken at the scene, appear to have been knocked off the rails.

Officials with the railway have reported no injuries.

The clean-up effort will get assistance from two recovery trains that have been dispatched to the location. 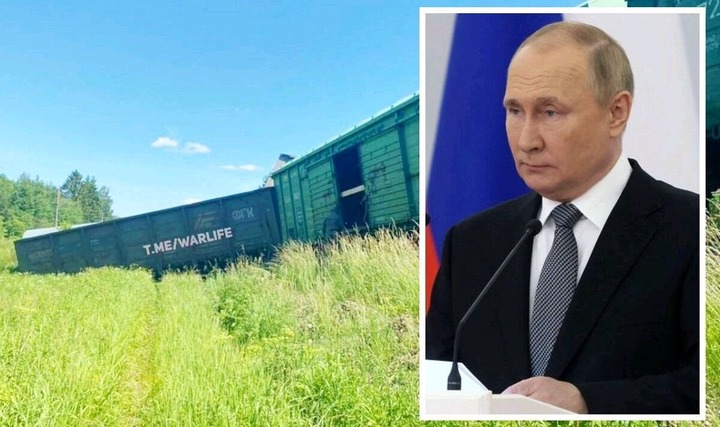 The train that derailed was reportedly transporting munitions, according to the reports (Image: Twitter and Getty) 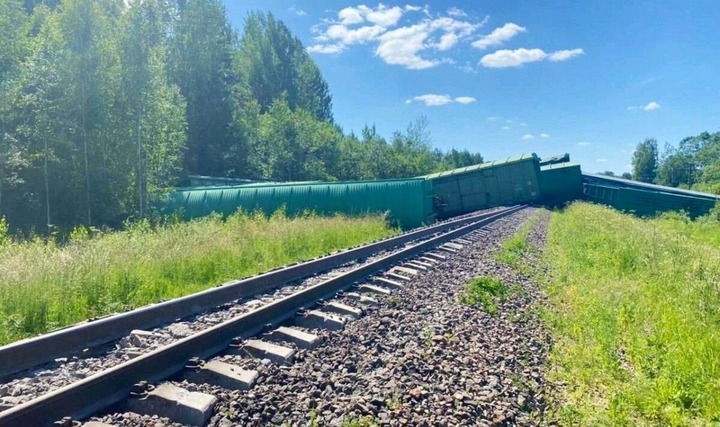 13 cars were derailed, and the Federal Railroad Safety Board is now monitoring the site (Image: Twitter)

The NEXTA news agency said that the train had a total of thirteen cars on board.

The event took place around 1:40 p.m. on Friday in the village of Sosonye, which is located along the Porkhov-Lunevo section of road.

The preliminary inquiry found that the brakes were applied when the train was traveling along the Lunevo-Porkhov stretch at a speed of 50 miles per hour while in the coast-down mode. This was followed by the train coming to a stop.

A change in the railroad track that occurs as a consequence of the spontaneous release of thermal tension in the track rails is referred to as "track ejection," and it is important to note that this phenomenon is more likely to occur during warm weather.

It has not been determined what exactly caused the collision as of yet. 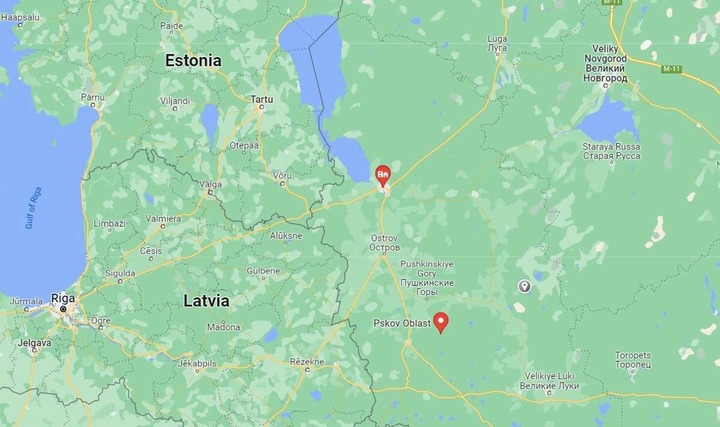 The incident took place in the vicinity of Pskov. (Image: Google) 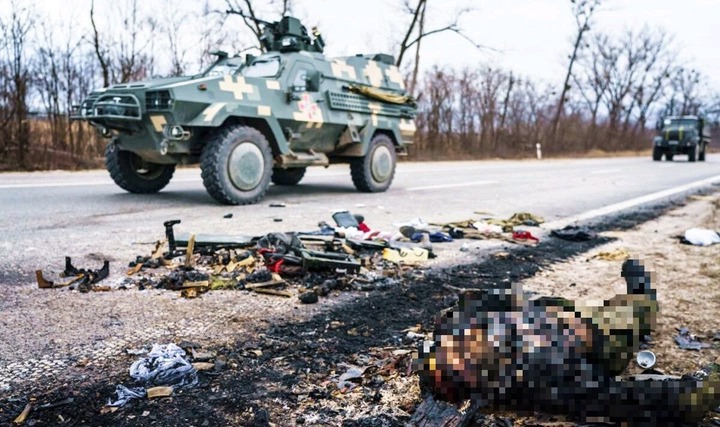 Since the beginning of the conflict, Russia has been on the receiving end of a string of humiliating defeats.

The statistics of additional losses incurred by the Russian military according to Ukrainian sources are a severe reminder to Putin of the price of war, notwithstanding the fact that there is no evidence of deliberate participation in the derailing of the train.

The most recent data that have been released by The Kyiv Independent estimate that there have already been 35,000 Russian servicemen dead since the beginning of the war, with over 100,000 others being maimed or wounded.

More than 1,550 Russian tanks have also been obliterated, in part as a result of attacks carried out in the earlier phases of the conflict by N-LAW missiles that were supplied by the United Kingdom. 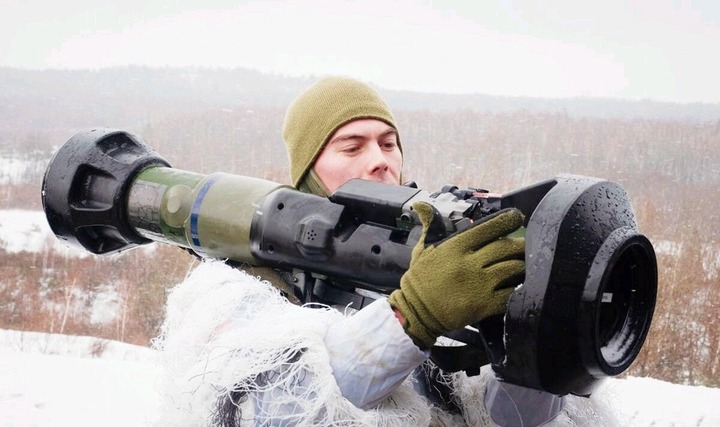 Additionally, the research indicates that 3,687 Russian armored personnel vehicles have been reduced to scrap.

771 Russian artillery batteries and 243 multiple launch rocket systems have both been destroyed by the Ukrainian armed forces (MLRS).

In the struggle for control of the airspace, Ukraine has been successful in shooting down or destroying 217 Russian fixed-wing aircraft and 184 Russian rotary-wing aircraft.

According to reports coming out of Ukraine, it appears that anti-air defenses have been successful in bringing down 139 cruise missiles, despite Russia's heavy reliance on these weapons.

As Ukraine asserts its superiority over the Black Sea, 14 warships have also met their end. 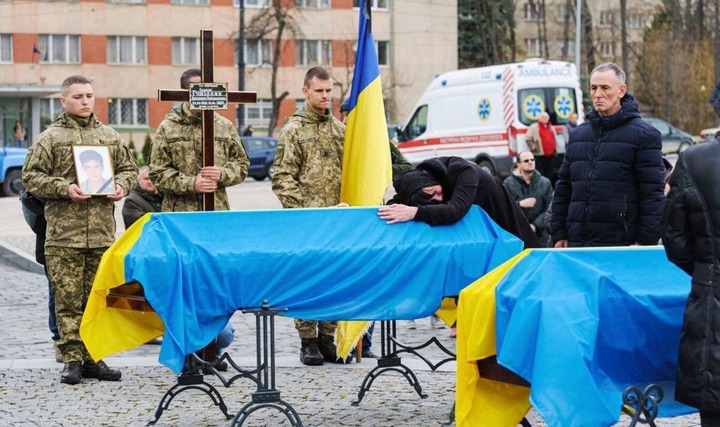 There have also been a significant number of casualties in Ukraine. (Image courtesy of Getty)

As Ukraine asserts its authority over the Black Sea, a total of 14 warships have met their demise, including the pride of the Russian navy, the Moskva, which has been sunk to the bottom of the body of water.

According to estimates, Kiev is losing up to 200 soldiers every day as Russian forces push over the territory as fighting continues to rage in the east of Ukraine.

At the beginning of June, numbers that were given by Ukrainian authorities suggested that Russian forces had killed nearly 10,000 Ukrainian troops.

It is estimated that the fight resulted in the wounding or injury of around 30,000 people.